What Is an Optical Viewfinder and How Is It Used When Taking Photographs?

When talking about cameras and photography the term ‘optical viewfinder’ (or OVF) refers to a component of a camera which a photographer looks through to view the scene in front of the camera. In a rangefinder the optical viewfinder uses its own lens to display an offset image of the scene being viewed, in an SLR type camera a mirror and system of prisms are used to allow the shooter to see the scene as it appears through the lens of the camera. An optical viewfinder is unable to display a view of a scene as it would appear once shot with current exposure settings, but doesn’t suffer from the resolution and refresh rate related issues found when using electronic viewfinders (or EVF). 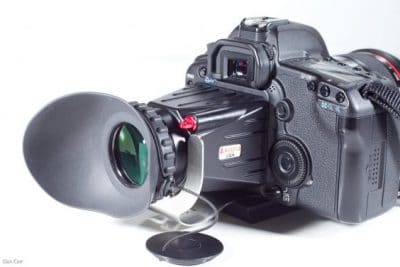 A DSLR with its OVF visible above the secondary viewfinder attachment which is using the screen as an EVF! Photo: Dan Carr