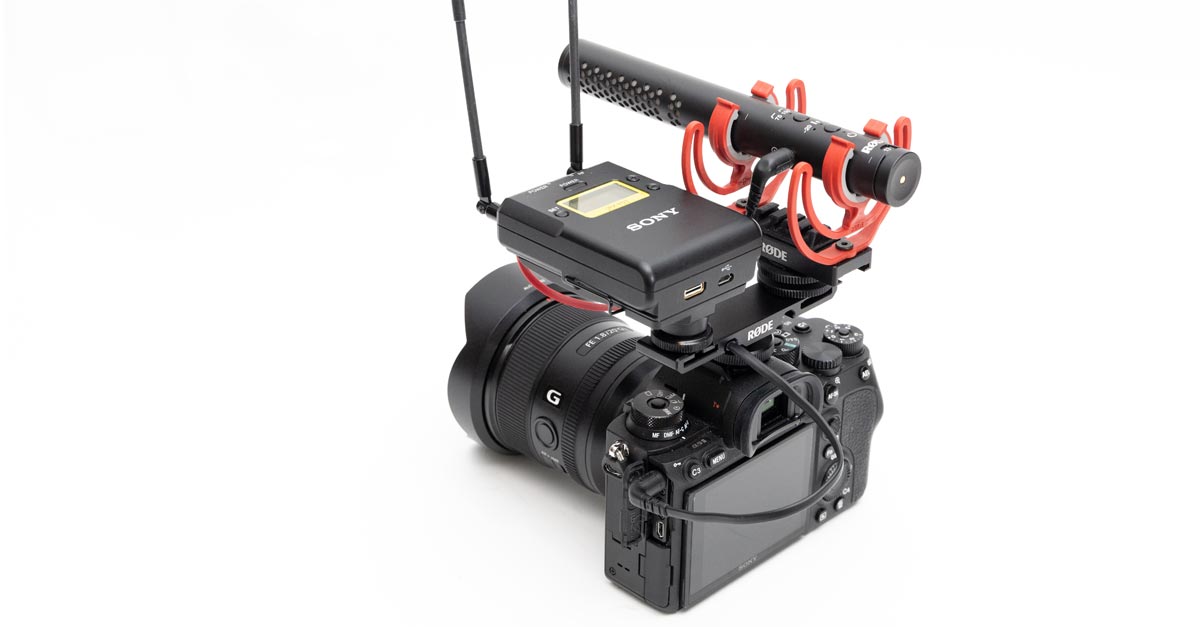 Rode released a couple of accessories that I knew I’d find a use for, so I bought them from B&H Photo and will tell you about them now. The first is a simple dual cold shoe mount called the Rode DCS-1 that allows you to clamp two microphones to your camera. Or really two of anything that mounts to a cold shoe, such an on-camera monitor or LED light.

The second is a splitter cable that allows you to input the sound from a pair of microphones directly into your camera as a single audio track. Although purchased separately for $15 each, these two items go very much hand in hand.

The Rode DCS-1 is an all-metal bracket that turns your camera’s hot shoe into a pair of cold shoes. The all-metal construction feels well made and sturdy, although I would have preferred it if the cold shoes had a front to them so that a microphone can’t slide all the way through the shoe.

On the underside of the DCS-1, you’ll find a pair of cable slots. These slots are designed to hold special sections of some of Rode’s cables such as the SC11, the SC10 and the SC16. A wide rubber section on those cables secures them into the cable slot to keep things nice and tidy. An example can be seen further down the page with the SC11 cable.

There are many reasons why someone might want to hold two things on a camera, so the DCS-1 mount is a very useful little gadget. Personally, I think I will find a use for it holding an on-camera light and a shotgun mic at the same time, or my lav mic receiver and shotgun as pictured below. The lav is all well and good for getting my voice, but the shotgun can be a way to get some additional ambient noise in nature, or perhaps simply as a backup to the lav.

When the DCS-1 was released, Rode also launched the SC11 cable. This cable is another simple, yet effective accessory and it pairs perfectly with the DCS-1. Cameras all have stereo 3.5mm mic inputs on them, but most people only plug a single mic into that input using a mono connection, or a dual-mono connection where the same mono track is output on both the left and right channels.

The SC11 is designed to work with the DCS-1, so there’s a section of the cable that is designed to clamp into the shaped slot on the dual shoe mount. Flat memory cables are used too, so you can shape the cable to your rig and it’ll stay in that shape. At just $15, I think it’s the kind of cable that every run and gun filmmaker should have in their kit. I’m sure it’ll be useful!