What Is An MTF Chart?

MTF stands for Modulation Transfer Function and an MTF chart is a chart that plots the optical performance of a lens across the the image, from the centre to the corner.

Various lines on the chart depict the lens’ performance in both contrast and resolution, and it’s the combination of these two things that give us what we might call perceived sharpness. A lens only looks sharp when there is a good balance of both contrast AND resolution, even though most people don’t typically think so much about the contrast side of things.

The x-axis of an MTF chart is measured in millimetres and it represents the distance from the centre of the lens.  0 is the centre and for full frame 35mm sensors, the far side is 21.6mm.

The y-axis shows a lens’ performance in recreating a set of test charts that show repeating line patterns, called line pairs.  Although the scale is in decimals, it’s actually referring to a percentage score of how well the lens was able to reproduce the image of these line pairs.  At a minimum, two sets of line pairs are tested, one which is set to 10 lines/mm and one which is set to 30 lines/mm.  The former test for contrast performance, while the latter tests resolution.  Both results are plotted on the chart as different lines and some charts, like Canon’s, also show these results for the lens when it is wide open and also when it is at f/8 (the ‘sweet spot’).  On top of this, the line pairs are tested in two orientations called sagittal and meridional, because a lens’ ability to reproduce fine detail and contrast does actually vary depending on the orientation relative to a diagonal line from the centre of the image to the corner.

PLEASE NOTE: MTF Charts are fairly complex so if you’ve some this far to read what it is, I’d urge you to continue to my in-depth article that explains how to read an MTF chart. This glossary entry here is intended only to give you a brief overview. 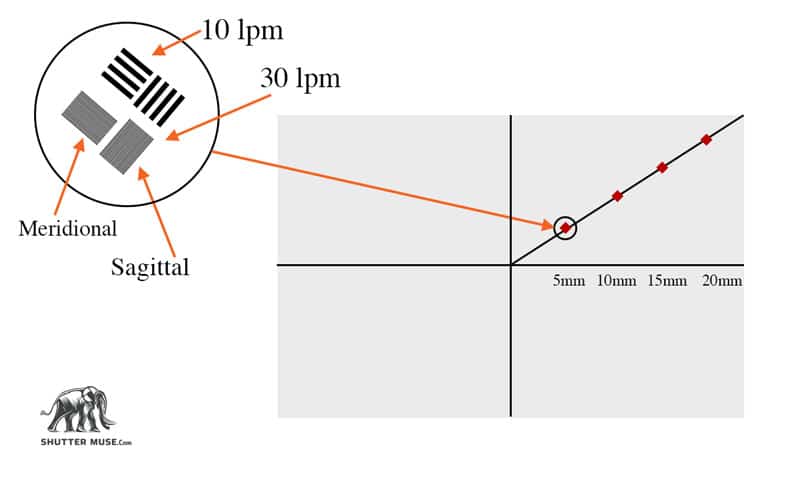 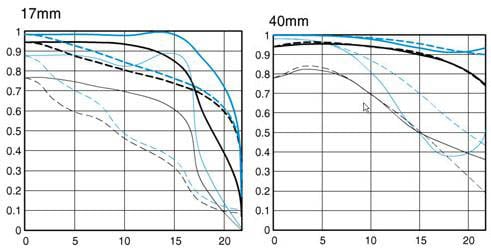