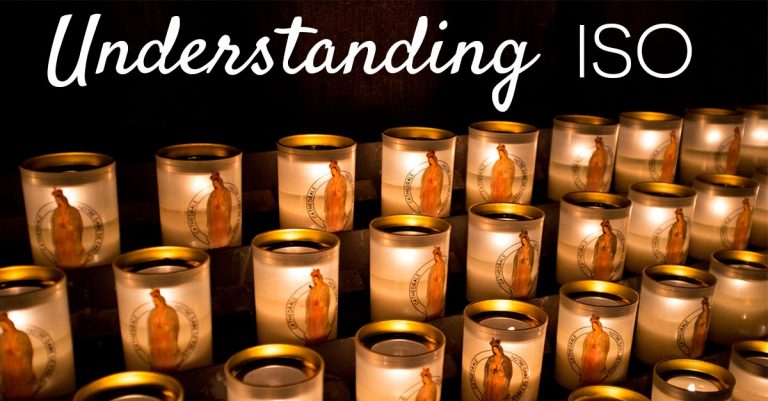 In the earlier days of film, ISO was used to indicate how sensitive to light a particular type of film was, and back then was called ASA.  These days we use ISO as a way to measure the light sensitivity of a camera’s digital sensor.  Varying the ISO of  your camera can have a dramatic effect on the look of your photo and along with shutter speed and aperture, it’s also part of our exposure triangle.  A standardized set of numbers is used as a scale, like 100, 200, 400 & 800 (also see full table further down this article).  The lower the number, the less sensitive your film, or digital camera is to light.  In the days of film, you would need to change your roll of film to use a different ISO.  With digital cameras though, we have the distinct advantage of being able to control the ISO of our photos from shot to shot if we want to.  As the ISO number doubles, so too does the amount of light being recorded by the camera’s sensor.  ISO 400 is twice as sensitive as ISO 200 and just as with shutter speed and aperture, when we double the light to the sensor, we refer to this as one ‘stop’ of light.  ISO 400 is one stop brighter than ISO 200 and that means it would take half as much time to record the same amount of light at the sensor.  If we used a constant aperture, then for every stop we increase ISO, we can halve the shutter speed that’s required to get the same overall exposure.

If you’ve read the corresponding articles about shutter speed and aperture, the two other sides to our exposure triangle, you’ll know there’s always a trade-off to be made when trying to get more light into your camera.  With aperture you get a shallower depth of field as you open up the aperture to let in more light. With shutter speed, as your exposure time increases to let in more light, it becomes harder to get sharp images of moving objects.  The tradeoff for ISO is that as you increase the camera’s sensitivity to light, your images get noisier, sometimes described as ‘grainier’.  It starts off almost imperceptible at lower values, usually between 100 and 400, but builds to the point where people might begin to find it unacceptable for the image quality they desire.  Whilst the ISO numbers are standardized, the amount of noise that corresponds to them is not.  This means that different cameras produce different amounts of noise at different ISO settings and there are several reasons for this which are discussed later in this article.  If you have a point-and-shoot camera, as well as a DSLR for example, they will display different amounts of noise in their images at ISO 1000, although their exposures will be the same given the same aperture and shutter speed settings.

Bright lighting, like outdoors in the sunshine, will require a lower ISO setting and therefore gives a cleaner image with less noise.  Poor lighting, like in a forest under cloudy skies, would require a higher ISO and typically result in noisier images.  You can always use a tripod though if you want to maintain a low ISO and keep your photos noise free.  Using a tripod allows you to use a longer shutter speed to get that precious light to your sensor, rather than having a more sensitive ISO setting.  The caveat for this is that your subject must be static, because a long shutter speed will not be able to stop motion.  The world around your subject would be sharp, but it would be blurry.  We often think of using high ISOs in dark places, but as long as your subject is static, there’s no reason why you can’t shoot at ISO 100 in the dark so long as you have a tripod.

ISO Chart If you’re looking to learn more about ISO and how it effects your exposure, or the look of your image, please check out our detailed article: Understanding ISO as part of our Photography 101 series. You Might Also Like F-Stop Chart Shutter Speed Chart Note that unlike f-stop and shutter speed, ISO values are never provided in half-stop increments.  Your camera will either allow you to choose ISO in one-stop, or third-stop increments.  Also note that towards the bottom of the chart, some of the third-stop options are listed as n/a.  Currently there are no cameras on the market that allow …