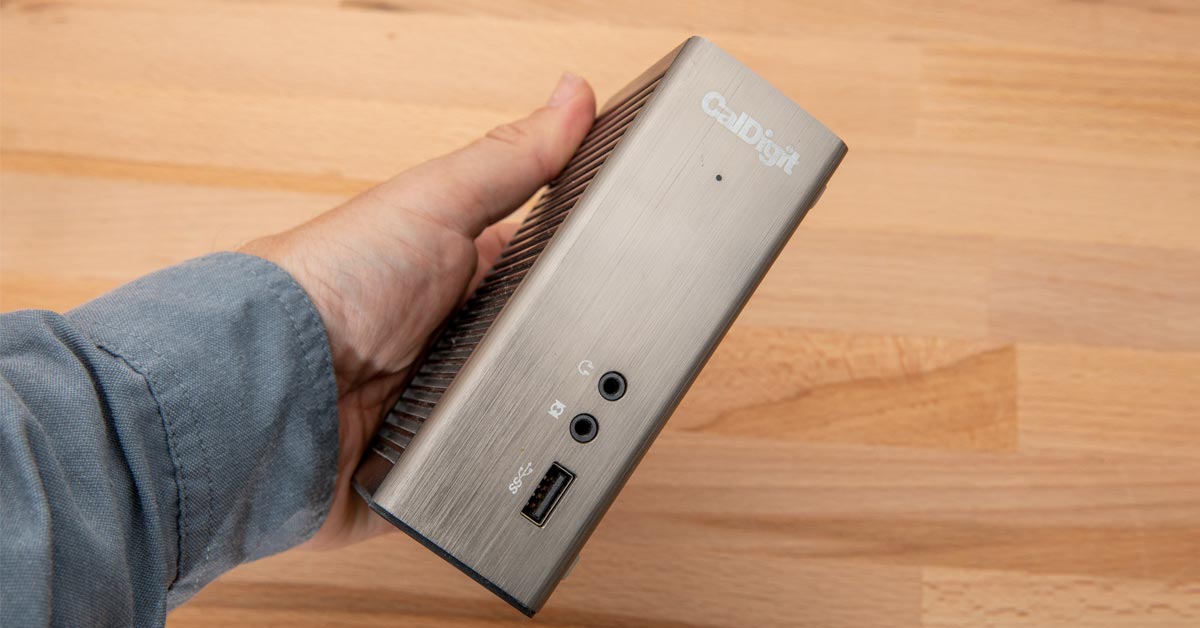 The Caldigit TS2 has now been replaced by the 15-port Caldigit TS3 Plus. The TS3 Plus features Thunderbolt 3 ports instead of Thunderbolt 2, as well as adding 10Gbps USB-C 3.1 Gen 2 and an optical audio connection. As you can see from the photo below, eSATA has been phased out in favour of adding additional USB 3 ports and HDMI has been replaced with DisplayPort for one of the monitor connections.

TS2 Thunderbolt Dock Features and Use

The first thing you notice when you unbox the TS2 is that it is a great looking piece of tech. The fanless heatsink design looks great on a desk next to a Mac, and it can be used vertically or horizontally using a pair of supplied rubber feet.

Of course without a fan, the TS2 is completely silent, and while it does generate a lot of warmth if you have all 11 ports churning away, it’s not the kind heat that would concern.

The second thing you notice when you unbox it – and hopefully it’s not too much of a surprise – is that it doesn’t actually come with a Thunderbolt 2 cable. If you’re comparing prices with other similar products on the market, take note that options from people like Belkin and Elgato do include a Thunderbolt cable, which contributes somewhat to their perceived higher pricing. At $199 the TS2 is not cheap, but it is one of the cheaper options so I think I can forgive them for not including the cable. That said, I probably would have preferred to pay $230 and just get it included to save the hassle of placing an additional order.

On the front of the dock, you’ll find an extra USB 3.0 port which is handy for use with small portable hard drives that come and go from your work environment, and you’ll also find 3.5mm mic and headphone jacks. I would have preferred to have seen the headphone jack on the back because this is what I use to connect my speakers to my computer. Having the jack on the front means there’s always one cable in the front, which somewhat spoils the neat and tidy look.

Who is this for?

If you’re using a Mac Pro or an iMac, this might not be for you. But for the many people who use MacBook Pros, this makes a great companion. By using the TS2 dock with the Caldigit utility you can safely disconnect all your drives simultaneously and simply unplug one cable when it’s time to leave the office with your laptop. On your return, simply plug that cable back in and you’ll be instantly connected to your monitor, your hard drives, your network, microphone, speakers and a host of other peripherals. As well as keeping your desk setup neat and tidy, it’s simply a satisfying, fast way to get back to work. I simply wouldn’t use a laptop in my office without using a dock like this, it’s a real game changer!

When comparing all the Thunderbolt 2 docks on the market, the Caldigit TS2 makes a strong case for itself with the inclusion of a pair of eSATA ports, something that is missing on many other docks. If you need those ports, as many professionals in the photo and video industry do, this is the best option out there. On the other hand, consumers using less expensive hard drives and peripherals might find the inclusion of only 3xUSB 3.0 ports a bit constricting. Throw a couple of USB hard drives on there and a memory card reader, hardly a difficult scenario to imagine, and you’ve already maxed those out. This leaves you plugging things like keyboards and graphics tablets into the USB ports on your laptop, which somewhat defeats the purpose of a one-cable-to-connect-it-all docking solution. It’s a great product, but if it had two more USB ports it would be darn near perfect.