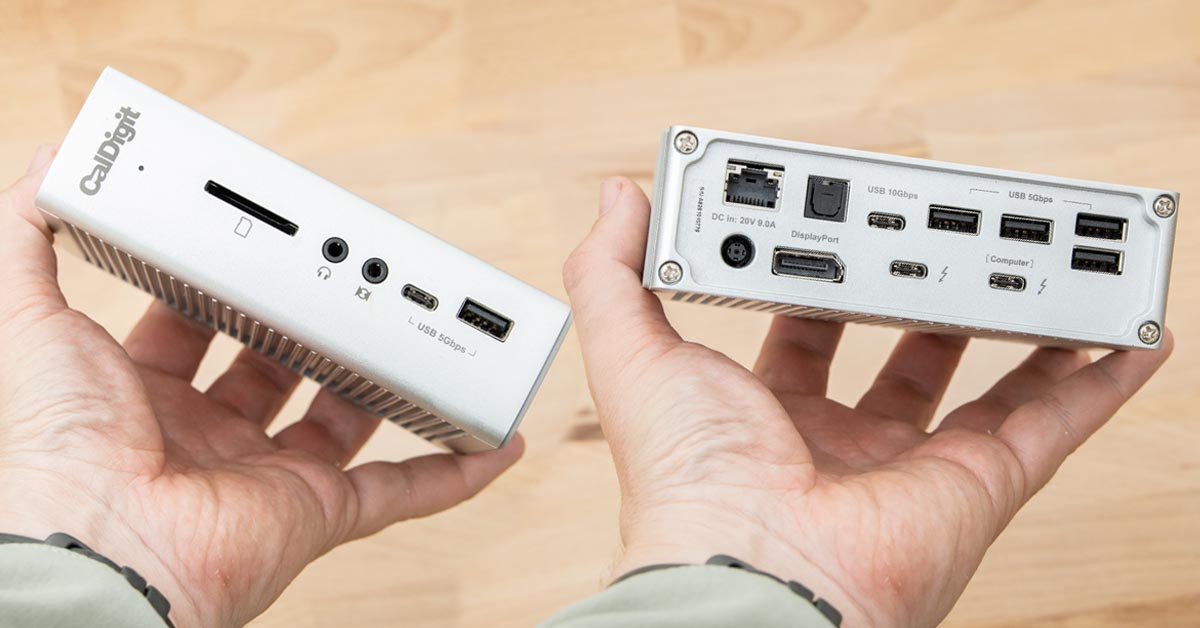 In the past, I have reviewed the CalDigit TS2 Thunderbolt 2 dock, but times move on and the Thunderbolt 2 standard has evolved to Thunderbolt 3. With that, CalDigit released the TS3 Plus Thunderbolt 3 dock which offers both a primary interface update over the previous model, as well as a slew of new ports and features. In fact, the TS3 Plus is a 15-port dock, and photographers can be excited because it also includes a speedy UHS-II compatible SD card reader, all connected to your computer via a single Thunderbolt 3 cable that even powers your laptop.

As with the previous Thunderbolt 2 version, the design of the dock is beautiful and it feels as well made as it looks. The brushed aluminum chassis is now silver, and that means it blends into a Mac environment even more. In fact, Apple has given this dock their own stamp of approval by selling it in Apple stores.

The dock contains no less than 5 5Gbps USB-A ports, as well as two USB-C ports – one of which is 10Gbps 3.1 Gen2. Then there is a pair of Thunderbolt 3 ports for connection to your computer, and daisy-chaining of additional Thunderbolt 3 devices such as monitors or hard drives. The second T3 port can also be used with USB-C devices.

Another important thing to note is that you can use this TS3 Plus dock with a Thunderbolt 2 Mac, as long as you buy the Apple Thunderbolt 2-Thunderbolt 3 adapter. This is actually how I have been using mine for a couple of years before getting around to this review. It works perfectly, and there’s no speed deficit to this setup because even the old Thunderbolt 2 protocol is 20 Gbps, faster than any of the devices you can plug into the dock.

The other big update is the inclusion of 85w of pass-through power delivery to a Mac that has a Thunderbolt 3 connection. This is a specific feature of the T3 interface, so it’s the only real feature that can’t be used if you connect it to a Thunderbolt 2 machine with the aforementioned adapter. For those with newer Macs featuring Thunderbolt 3, you can get 85w of power when plugged into the dock. This will be more than enough for most laptops, apart from perhaps those using the highest-end models of the 16″ MacBook Pro, while running extremely graphic intensive applications for prolonged periods of time.

On the front of the dock, you have an SD card reader which is very useful for photographers. Even better, it’s a UHS-II compatible reader, which makes it potentially twice as fast as the SD card slots that used to be built into MacBook Pros, so long as you are using a UHS-II SD card. I won’t bore you with the speed tests here, but I did run them and it matches the fastest SD card readers that I have tested from the likes of Lexar and ProGrade Digital.

You also get a pair of USB ports on the front which is handy for hard drives that come and go from your office, negating a constant need to be rummaging around behind the device. Unfortunately, the 3.5mm headphone jack is still on the front, which I do find annoying because I actually use this to hook up my computer speakers, and not with headphones which are all Bluetooth now anyway. This leaves one cable always plugged into the front of the dock, which somewhat degrades the otherwise neat and tidy look of the product.

Having been a long time owner of the previous version, I can confidently say that the TS3 Plus is a great improvement that both solves my previous problems (not enough USB ports, no SD card reader) and moves with the times by updating to Thunderbolt 3 and USB-C while ditching ageing eSATA ports.

If you compare this dock with others on the market from Elgato, Belkin and OWC, you’ll find them to all offer roughly similar numbers of ports, and closely related price points. However, the CalDigit is the best of the bunch, due to the much neater vertical orientation and the great looking Mac ish design.

For Mac laptop users who want to simplify the process of connecting and then disconnecting a huge range of peripherals, this is a great choice.