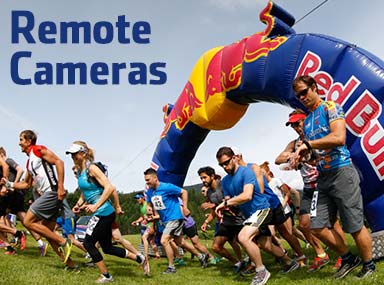 This past weekend I was in Vancouver, BC, working for Red Bull and covering one of their events called Divide & Conquer.  A three-stage adventure race that would see teams of three athletes run up a mountain, ride a bike back down it again and then paddle kayaks through the city of North Vancouver and out into the Pacific Ocean.

Whenever I’m on a paid assignment I make sure I have more than one camera with me.  Touch wood, I’ve never had a camera fail on me during a job but it could happen.  Especially given the adventurous nature of some of the work that I like to do.  Since I have a second camera with me I’ll often try and make use of it as a remote camera to capture a second angle of an important part of the event.  Why not??  The added equipment needed to turn the spare camera into a remote camera is relatively minor and many people will already own it anyway.  One of the keys is to make it logistically easy as well though because in a photojournalistic environment you need to pay attention to what’s going on around you and NOT spend a ton of time with fancy camera setups.  You need a simple solution that you can just set up in a few seconds and doesn’t impede your progress with covering the event.

For this Red Bull event, I was shooting with a pretty simple kit.  If I could only take two lenses with me to cover a sporting event it would be the Canon 24-70 f/2.8 L II and the Canon 200-400 f/4 L IS 1.4x.  That might seem like a big gap in the middle between 70 and 200, and sometimes I’ll fill that gap with a 70-200 but more often than not I don’t need it.  24-70 gets you great environmental portraiture and at least for sporting action, 200-400 gives you the ability to isolate subjects nicely and stay well out of the way of the action.  If I take a third lens, it’s most likely to be my Canon 8-15 f/4 L fisheye because I find this to work very well for sticking remote cameras in tight spaces and also getting one or two very different looking perspectives than the other two lenses will deliver.

For this example, we’re going to take a very quick look at the start of this endurance race.  I shot the main angle with a 5D Mark 3 and the 24-70 but I also set up a second 5D Mark 3 with the fisheye lens and stuck it on a small carbon TQC-13 tripod by Really Right Stuff.  It’s important that the tripod is small so you can get the camera close to the ground.  I used a pair of PocketWizard Plus IIIs and a remote cable from the receiving PocketWizard into the side of the camera.  I held the transmitter in my left hand while shooting the main image on the first camera.  You could also put it in the hot shoe of your handheld camera as well but I sometimes find the remote fires faster if you don’t do that.  It’s a remarkably simple setup really when you consider that you would already have that second camera with you.  The pair of PocketWizards and the cable fit easily into a small pouch on my belt so I always have them with me and I can set up a remote shot in under 30 seconds if I see an opportunity.

As you can see from the resulting shots, it quickly provides two very different perspectives and Red Bull will go on to use both of these images.  Even if you didn’t already have a pair of PocketWizards for some strobe work, I would recommend buying a pair for quickly setting up a camera.  Your clients will love you for providing them with options for different layouts in their publications or campaigns.

Equipment Needed ( or at least what I used )