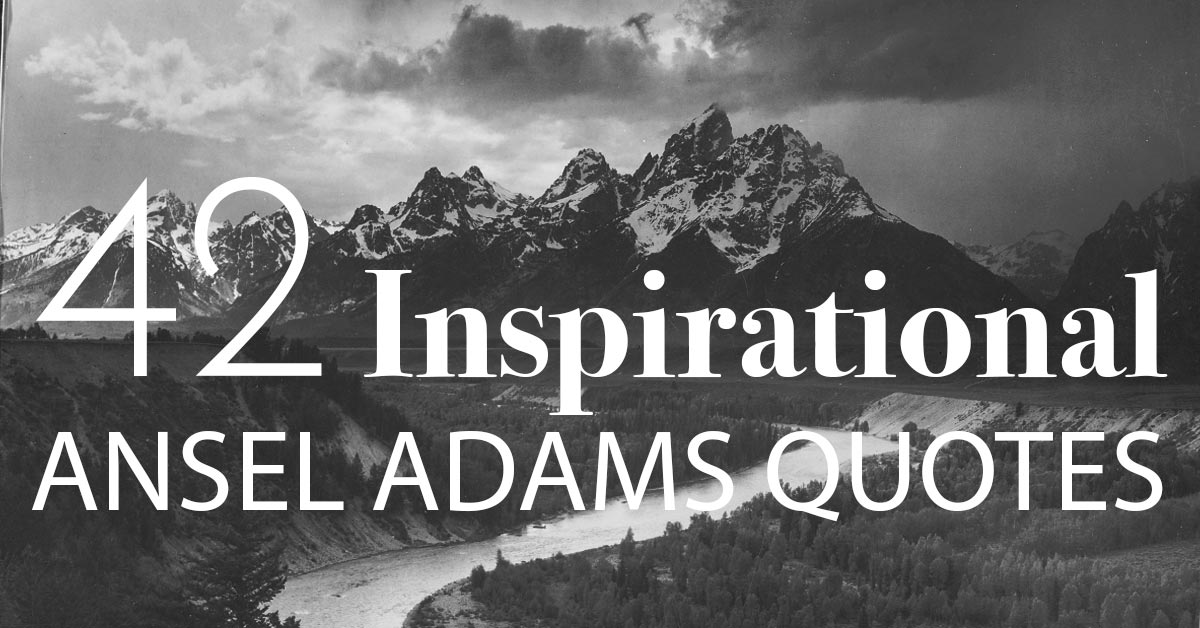 As photographers we have all been there; Waking up one morning excited to document the world around us but finding that the creative juices simply aren’t flowing as freely as we would like them to be. It feels like trying to swim upstream and the more you try to think yourself into a creative state, the worse it becomes. At times like these, I find it helpful to turn to the wisdom of those who have come before us, the past masters of the photographic art form who paved the paths we walk today.

Born in 1902, Ansel Easton Adam would become the most celebrated landscape photographer of his generation, a passionate environmentalist whose black and white landscapes of the American West are still believed to be amongst the finest ever created. There are few voices on the subject of taking photographs that carry as much weight as that of Ansel Adams, and few that provide such a wealth of wisdom and inspiration. The following is a collection of his finest words to add to our quote collection and help get those creative juices flowing freely once again.

1. “Ask yourself: “Does this subject move me to feel, think and dream?” – Ansel Adams

2. “A photograph is usually looked at – seldom looked into.” – Ansel Adams

4. “Photography, as a powerful medium of expression and communications, offers an infinite variety of perception, interpretation and execution.” – Ansel Adams

5. “When words become unclear, I shall focus with photographs. When images become inadequate, I shall be content with silence.” – Ansel Adams

7. “A great photograph is one that fully expresses what one feels, in the deepest sense, about what is being photographed.” – Ansel Adams

8. “A good photograph is knowing where to stand.” – Ansel Adams

9. “I believe there is nothing more disturbing than a sharp image of a fuzzy concept!” – Ansel Adams

10. “There are always two people in every picture: the photographer and the viewer.” – Ansel Adams

12. “It is horrifying that we have to fight our own government to save the environment.” – Ansel Adams

13. “Sometimes I do get to places just when God’s ready to have somebody click the shutter.” – Ansel Adams

14. “Some photographers take reality… and impose the domination of their own thought and spirit. Others come before reality more tenderly and a photograph to them is an instrument of love and revelation.” – Ansel Adams

15. “Not everybody trusts paintings but people believe photographs.” – Ansel Adams

16. “It is my intention to present – through the medium of photography – intuitive observations of the natural world which may have meaning to the spectators.” – Ansel Adams

17. “In wisdom gathered over time I have found that every experience is a form of exploration.” – Ansel Adams

18. “Photography is more than a medium for factual communication of ideas. It is a creative art.” – Ansel Adams

19. “The negative is comparable to the composer’s score and the print to its performance. Each performance differs in subtle ways.” – Ansel Adams

20. “Twelve significant photographs in any one year is a good crop.” – Ansel Adams

21. “We must remember that a photograph can hold just as much as we put into it, and no one has ever approached the full possibilities of the medium.” – Ansel Adams

22. “The only things in my life that compatibly exists with this grand universe are the creative works of the human spirit.” – Ansel Adams

23. “In my mind’s eye, I visualize how a particular… sight and feeling will appear on a print. If it excites me, there is a good chance it will make a good photograph. It is an intuitive sense, an ability that comes from a lot of practice.”– Ansel Adams

24. “Millions of men have lived to fight, build palaces and boundaries, shape destinies and societies; but the compelling force of all times has been the force of originality and creation profoundly affecting the roots of human spirit.” – Ansel Adams

25. “A true photograph need not be explained, nor can it be contained in words.” – Ansel Adams

26. “When I’m ready to make a photograph, I think I quite obviously see in my minds eye something that is not literally there in the true meaning of the word. I’m interested in something which is built up from within, rather than just extracted from without.” – Ansel Adams

27. “The single most important component of a camera is the twelve inches behind it.” – Ansel Adams

28. “To photograph truthfully and effectively is to see beneath the surfaces.” – Ansel Adams

30. “No man has the right to dictate what other men should perceive, create or produce, but all should be encouraged to reveal themselves, their perceptions and emotions, and to build confidence in the creative spirit.” – Ansel Adams

31. “Myths and creeds are heroic struggles to comprehend the truth in the world.” – Ansel Adams

32. “The sheer ease with which we can produce a superficial image often leads to creative disaster.” – Ansel Adams

33. “Sometimes I do get to places just when God’s ready to have somebody click the shutter.” – Ansel Adams

34. “…one sees differently with color photography than black-and-white… in short, visualization must be modified by the specific nature of the equipment and materials being used.” – Ansel Adams

35. “Dodging and burning are steps to take care of mistakes God made in establishing tonal relationships.” – Ansel Adams

36. “I am sure the next step will be the electronic image, and I hope I shall live to see it. I trust that the creative eye will continue to function, whatever technological innovations may develop.” – Ansel Adams

37. “Our lives at times seem a study in contrast… love & hate, birth & death, right & wrong… everything seen in absolutes of black & white. Too often we are not aware that it is the shades of grey that add depth & meaning to the starkness of those extremes.” – Ansel Adams

38. “In some photographs the essence of light and space dominate; in others, the substance of rock and wood, and the luminous insistence of growing things…It is my intention to present-through the medium of photography-intuitive observations of the natural world which may have meaning to spectators…” – Ansel Adams

39. “I never know in advance what I will photograph, … I go out into the world and hope I will come across something that imperatively interests me. I am addicted to the found object. I have no doubt that I will continue to make photographs till my last breath.” – Ansel Adams

40. “No matter how sophisticated you may be, a large granite mountain cannot be denied – it speaks in silence to the very core of your being” – Ansel Adams

41. “These people live again in print as intensely as when their images were captured on old dry plates of sixty years ago… I am walking in their alleys, standing in their rooms and sheds and workshops, looking in and out of their windows. Any they in turn seem to be aware of me.” – Ansel Adams

42. “Notebook. No photographer should be without one.” – Ansel Adams

If you’d like to explore some of Adams’ images in high resolution, a remarkable collection is available via Wikimedia Commons after they were made public domain by the US Parks service.