Home » # » 50 Great Quotes to Inspire the Photographer in You

50 Great Quotes to Inspire the Photographer in You 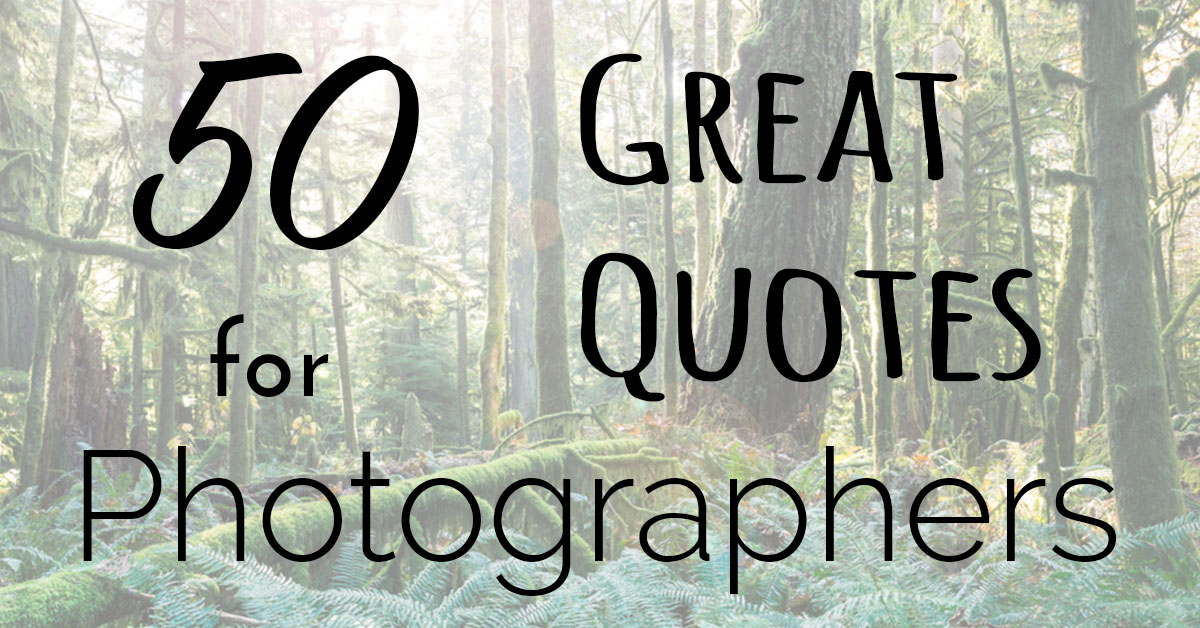 Sometimes you just need a little inspiration to climb out of a creative rut. I’ve kept a number of quotes in a folder on my phone for a while and I thought it was about time I shared them with you. Hopefully, you find them useful!

If you’ve got a favourite quote that’s not on the list, leave it in the comments at the bottom. Of course, many of these are specifically related to photography, but others are more about general creativity and exploration. These are the things that resonate with me for my style of work.

2. “The whole point of taking pictures is so that you don’t have to explain things with words.” – Elliott Erwitt

3. “Photography takes an instant out of time, altering life by holding it still.” – Dorothea Lange

4. “To me, photography is an art of observation. It’s about finding something interesting in an ordinary place… I’ve found it has little to do with the things you see and everything to do with the way you see them.” – Elliott Erwitt

5.  “Vision is the art of seeing what is invisible to others.” – Jonathan Swift

6. “To photograph is to hold one’s breath, when all faculties converge to capture fleeting reality. It’s at that precise moment that mastering an image becomes a great physical and intellectual joy.” – Henri Cartier-Bresson

7. “Which of my photographs is my favourite? The one I’m going to take tomorrow.” – Imogen Cunningham

9. “Everything should be made as simple as possible, but not simpler.” – Albert Einstein

10. “When words become unclear, I shall focus with photographs. When images become inadequate, I shall be content with silence.” – Ansel Adams

11. “Photography for me is not looking, it’s feeling. If you can’t feel what you’re looking at, then you’re never going to get others to feel anything when they look at your pictures.” – Don McCullin

12. “You can’t depend on your eyes when your imagination is out of focus.” – Mark Twain

13. “A good photograph is one that communicates a fact, touches the heart and leaves the viewer a changed person for having seen it. It is, in a word, effective.” – Irving Penn

14. “All photographs are accurate. None of them is the truth.” – Richard Avedon

16. “The camera is an excuse to be someplace you otherwise don’t belong. It gives me both a point of connection and a point of separation.” – Susan Meiselas

17. “My life is shaped by the urgent need to wander and observe, and my camera is my passport.” – Steve McCurry

19. “No idea is so outlandish that it should not be considered.” – Winston Churchill

20. “Create your own visual style… let it be unique for yourself and yet identifiable for others.” – Orson Welles

23. “Blessed are the curious, for they shall have adventures” – Lovell Drachman

24. “The best thing about a picture is that it never changes, even when the people in it do.” – Andy Warhol

26. “To me, photography is the simultaneous recognition in a fraction of a second of the significance of an event.” – Henri Cartier-Bresson

27. “Do not follow where the path may lead. Go instead where there is no path and leave a trail.” – Ralph Waldo Emerson

28. “There is nothing worse than a brilliant image of a fuzzy concept.” – Ansel Adams

29. “Man cannot discover new oceans unless he has the courage to lose sight of the shore.” – Andre Gide

30. “Perfection is attained by slow degrees; it requires the hand of time.” – Voltaire

31. “Great photography is about depth of feeling, not depth of field.”  –  Peter Adams

33. “Beauty can be seen in all things, seeing and composing the beauty is what separates the snapshot from the photograph.” – Matt Hardy

34. “I always thought good photos were like good jokes. If you have to explain it, it just isn’t that good.” – Anonymous

35. “The cliché comes not in what you shoot but in how you shoot it.” – David duChemin

37. “It can be a trap of the photographer to think that his or her best pictures were the ones that were hardest to get.” – Timothy Allen

38. “Simplicity is the outcome of technical subtlety. It is the goal, not the starting point.” – Maurice Saatchi

39. “The two most engaging powers of a photograph are to make new things familiar and familiar things new.” – William Thackeray

40. “It is through art, and through art only, that we can realize our perfection.” – Oscar Wilde

41. “Life is either a daring adventure or nothing.” – Helen Keller

43. “If I could tell the story in words, I wouldn’t need to lug around a camera.” – Lewis Hine

44. “You’ve got to think about big things while you’re doing small things, so that all the small things go in the right direction.” – Alvin Toffler

45. “There are always two people in every picture: the photographer and the viewer.” – Ansel Adams

46. “I find the single most valuable tool in the darkroom is my trash can.” – John Sexton

47. “The negative is the equivalent of the composer’s score and the print the performance.” – Ansel Adams

48. “There is a vast difference between taking a picture and making a photograph.” – Robert Heinecken

49. “I think life is too short not to be doing something which you really believe in.” – Steve McCurry

50. “If you are out there shooting, things will happen for you. If you’re not out there, you’ll only hear about it.” – Jay Maisel

I’m going to leave you guys with one more bonus quote as well, and this is something that I try and remind myself all the time when the photographic conditions aren’t what I had hoped they’d be at a particular time or place.

As photographers, we are slaves to many external forces and it can be tough sometimes to overcome adverse conditions when you had a pre-imagined idea for a photograph. It can also be tough in today’s age to follow all these amazing photographers on Instagram and Facebook and see them travelling to all corners of the globe to take amazing photos.  I travel a decent amount, but I’m still not totally immune to these feelings myself.  Sometimes we just need a little reminder…

51. “The destination is much less important than the vision you bring to it.” – Dan Carr

I hope you guys find some inspiration from these, as I have done.  Please share then with your friends!