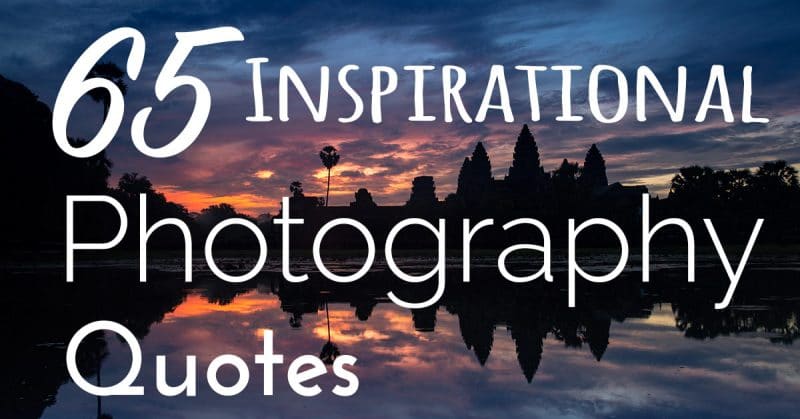 Sometimes we jus need a little inspiration, and I’ve found that it can be as simple as a few quotes from some very wise people.  These are my favourite ones on the subject of photography:

1. “To photograph is to hold one’s breath, when all faculties converge to capture fleeting reality. It’s at that precise moment that mastering an image becomes a great physical and intellectual joy.” – Henri Cartier-Bresson

2. “The whole point of taking pictures is so that you don’t have to explain things with words.” – Elliott Erwitt

4. “The negative is the equivalent of the composer’s score and the print the performance.” – Ansel Adams

5. “All photographs are accurate. None of them is the truth.” – Richard Avedon

7. “A good photograph is knowing where to stand.” – Ansel Adams

8. “One should really use the camera as though tomorrow you’d be stricken blind.” – Dorothea Lange

9. “A photograph is a moral decision taken in one eighth of a second.” – Salman Rushdie

10. “I think life is too short not to be doing something which you really believe in.” – Steve McCurry

11. “It can be a trap of the photographer to think that his or her best pictures were the ones that were hardest to get.” – Timothy Allen

12. “Vision is the art of seeing what is invisible to others.” – Jonathan Swift

13. “There is one thing the photography must contain, the humanity of the moment. This kind of photography is realism. But realism is not enough – there has to be vision, and the two together can make a good photograph.” – Robert Frank

14. “A photographer is like a cod, which produces a million eggs in order that one may reach maturity.” – George Bernard Shaw

15. “The two most engaging powers of a photograph are to make new things familiar and familiar things new.” – William Thackeray

16. “I tend to think of the act of photographing, generally speaking, as an adventure. My favorite thing is to go where I’ve never been.” – Diane Arbus

17. “Don’t pack up your camera until you’ve left the location.” – Joe McNally

18. “A good photograph is one that communicates a fact, touches the heart and leaves the viewer a changed person for having seen it. It is, in a word, effective.” – Irving Penn

19. “I find the single most valuable tool in the darkroom is my trash can.” – John Sexton

20. “The camera is an excuse to be someplace you otherwise don’t belong. It gives me both a point of connection and a point of separation.” – Susan Meiselas

22. “There are no bad pictures; that’s just how your face looks sometimes.” – Abraham Lincoln

24. “The picture that you took with your camera is the imagination you want to create with reality.” – Scott Lorenzo

26. “The only photographer you should compare yourself to is the one you used to be.” – Unknown

27. “A portrait is not made in the camera but on either side of it.” – Edward Steichen

28. “To me, photography is an art of observation. It’s about finding something interesting in an ordinary place… I’ve found it has little to do with the things you see and everything to do with the way you see them.” – Elliott Erwitt

29. “Photography can only represent the present. Once photographed, the subject becomes part of the past.” – Berenice Abott

30. “Photography for me is not looking, it’s feeling. If you can’t feel what you’re looking at, then you’re never going to get others to feel anything when they look at your pictures.” – Don McCullin

31. “You don’t make a photograph just with a camera. You bring to the act of photography all the pictures you have seen, the books you have read, the music you have heard, the people you have loved.” – Ansel Adams

33. “There is a vast difference between taking a picture and making a photograph.” – Robert Heinecken

35. “Photography takes an instant out of time, altering life by holding it still.” – Dorothea Lange

36. “Twelve significant photographs in any one year is a good crop.” – Ansel Adams

37. “Beauty can be seen in all things, seeing and composing the beauty is what separates the snapshot from the photograph.” – Matt Hardy

38. “My life is shaped by the urgent need to wander and observe, and my camera is my passport.” – Steve McCurry

39. “Photography is a way of feeling, of touching, of loving. What you have caught on film is captured forever… It remembers little things, long after you have forgotten everything.” – Aaron Siskind

40. “To me, photography is the simultaneous recognition in a fraction of a second of the significance of an event.” – Henri Cartier-Bresson

41. “A good snapshot keeps a moment from running away.” – Eudora Welty

42. “Taking pictures is savoring life intensely, every hundredth of a second.” – Marc Riboud

43. “When words become unclear, I shall focus with photographs. When images become inadequate, I shall be content with silence.” – Ansel Adams

44. “When people look at my pictures I want them to feel the way they do when they want to read a line of a poem twice.” – Robert Frank

45. “Great photography is about depth of feeling, not depth of field.”  –  Peter Adams

46. “Taking pictures is savoring life intensely every hundredth of a second.” – Mark Riboud

49. “There are always two people in every picture: the photographer and the viewer.” – Ansel Adams

51. “Your photography is a record of your living, for anyone who really sees.” – Paul Strand

53. “Photographers deal in things which are continually vanishing and when they have vanished there is no contrivance on earth which can make them come back again.” – Henri Cartier-Bresson

54. “If I could tell the story in words, I wouldn’t need to lug around a camera.” – Lewis Hine

55. “It is one thing to photograph people. It is another to make others care about them by revealing the core of their humanness.” – Paul Strand

56. “There is nothing worse than a brilliant image of a fuzzy concept.” – Ansel Adams

57. “The camera makes you forget you’re there. It’s not like you are hiding but you forget, you are just looking so much.” – Annie Leibovitz

58. “Which of my photographs is my favourite? The one I’m going to take tomorrow.” – Imogen Cunningham

59. “If you are out there shooting, things will happen for you. If you’re not out there, you’ll only hear about it.” – Jay Maisel

60.  “The best thing about a picture is that it never changes, even when the people in it do.” – Andy Warhol

61. “It’s weird that photographers spend years or even a whole lifetime, trying to capture moments that added together, don’t even amount to a couple of hours.” – James Lalropui Keivom

62. “The cliché comes not in what you shoot but in how you shoot it.” – David duChemin

63. “I always thought good photos were like good jokes. If you have to explain it, it just isn’t that good.” – Anonymous

64. “The camera has always been a guide, and it’s allowed me to see things and focus on things that maybe an average person wouldn’t even notice.” – Don Chadwick

65. “I really believe there are things nobody would see if I didn’t photograph them.” – Diane Arbus

BONUS: “Photographs are everywhere. The destination is much less important than the vision you bring to it.” – Dan Carr

WHICH IS YOUR FAVOURITE QUOTE?  LET ME KNOW IN THE COMMENTS BELOW!