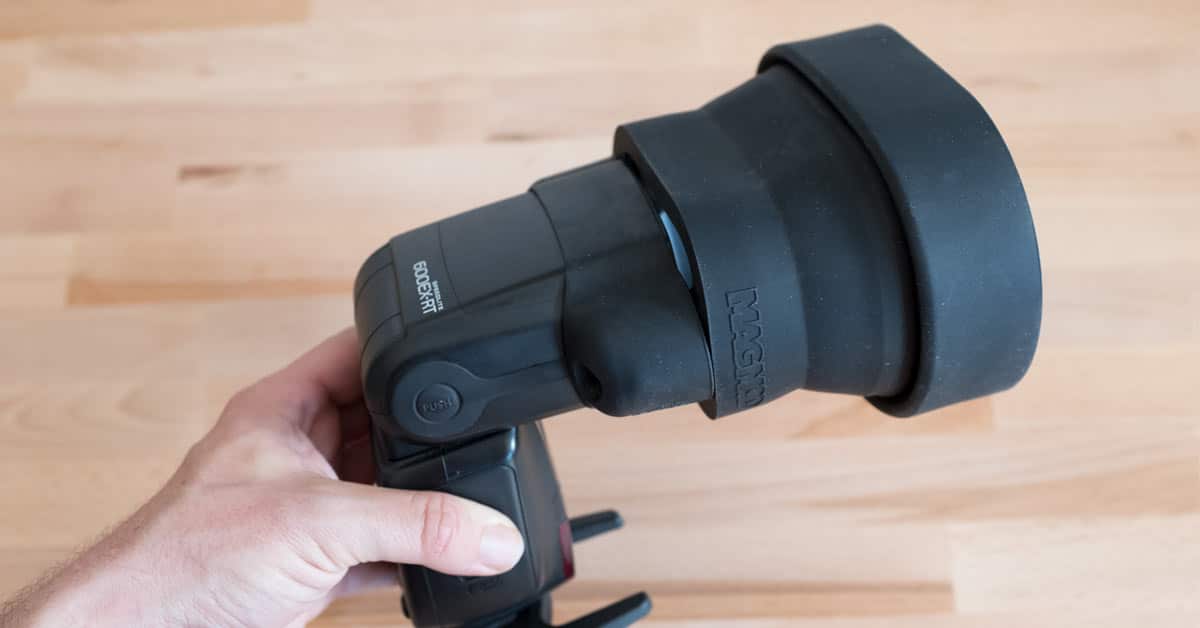 It’s often beneficial to use a little fill flash in wildlife photography to brighten up the shadows on a backlit animal, or add a catch light into something’s eye to help it look a little more alive. You can pretty much forget about ever doing these things with a pop-up flash, they simply don’t have enough power, so that means you’ll most likely be looking at a hot shoe flash. If you’ve used one before, you might have noticed that they sometimes have zoom settings on them which help you to control the focus of the flash output to suit a particular focal length. No sense having the flash spread out wide across the scene when you’re only capturing a small portion of it with a 70-200 lens for example.

The problem that wildlife photographers face is that none of these zoomable flash heads have settings that go past 200mm, but you’ll almost certainly be using at least 300-400mm when shooting animals, and often more than 600mm! What you need is something that can constrain that flash output and focus it into a beam that’s more suitable for usage with these longer focal lengths. The MagBeam is just such a tool, and it uses a Fresnel lens to focus that flash output much like that which you would find in a spotlight at a theatre. The lens is build into a clever collapsible rubber tube that sticks to the front of your flash using incredibly strong magnets.

MagMod claims the MagBeam will increase effective flash power by 2-3 stops, and I found this to be true in my testing. To be clear about this, obviously the flash has a finite amount of power that it’s able to pump out at any given setting, but what the MagMod MagBeam does is simply funnel all of that light into a much tighter circle, effectively increasing the brightness of the light in that one particular spot by 2-3 stops.

Increased brightness is great, but there are other knock on effects from this. If you didn’t actually need the flash to be brighter, it means you can now turn your flash power down and get the same flash brightness you were getting before, but now using 2-3 stops less power. This means your batteries last longer, and your flash will recycle 4 times faster! That last part is a pretty big deal when you’re working with fast moving, skittish animals! It could very well make the difference between you getting the shot or not, because hot shoe flash recycle times can be a couple of seconds when they are used at full power.

When you purchase your MagBeam, you select the kit that is designed for your flash model. There’s no change to the fresnel lens or lens holder, all you are doing is specifying the size of the magnetic holder that attaches to the flash. On my Canon 600 EX RT flash I found the rubber band to be an extremely tight fit on the flash, and it’s quite a struggle to get it on there. That’s ok in my book, because I plan on simply leaving it on there all the time, but it’s worth noting this in case you have a reason why you’d need to keep removing it. It would be a pain in the ass, and definitely not something to be fiddling with when you’re in a hurry.

I like the design of the MagBeam a lot, and it feels like a quality product as soon as you start to unpack it. The rubber fresnel lens holder can be extended to two different positions, giving three total positions if you include the fully collapsed state. As you can see from the beam pattern samples further down the page, this means you have some control over the spread of the beam, which could be handy if you’re switching between a few super telephoto lenses such as a 300mm and a 600mm, or a 100-400.

When the very first MagMod products hit Kickstarter, I remember emailing the owner of the company and asking about the possibility of a fresnel lens attachment, as an alternative to the Better Beamer Flash Extender because it was immediately apparent to me that these magnets were a far superior way to deal with flash accessories. At the time it was indicated that this was a distinct probability, so I was happy to see the MagBeam launched on Kickstarter a couple of years later and I immediately backed the project.

For many years the Better Beamer Flash Extender was the only option in town, and whilst it works and is cheap, I never enjoyed the experience of using it due to the overly fiddly hook-and-look mounting strap, and the necessity to carry around multiple pieces that were easily separated in luggage. It’s hard to be too down on the Better Beamer though, because it’s so cheap ($35) that you can’t reasonably expect more for the price. It should also be noted that my testing of it has shown it to be just as effective at extending flash range as the more expensive MagBeam, so the end result is the same.

Personally I much prefer the MagBeam though, because you can leave the magnetic adapter on your flash and that means setup time is literally under a second. If you’ve been surprised by a chance animal encounter then it could make the difference between getting the shot, and not. Being made from rubber also makes the MagBean feel much more durable, and the included soft pouch is a nice touch. The price difference between the two is about $40, but I think it’s well worth the extra money to get the MagBeam. I regularly use other MagMod accessories too, such as the gels and the grids, so for me it’s also part of a system, and I simply leave the magnetic adapter on my flash all the time. All the other accessories can be stacked together with the MagBeam too, so there’s potential for some interesting effects, such as gelling the flash with a CTO gel to shift the ambient white balance.

The final benefit, as you can see from the beam pattern examples, is the ability to adjust the beam spread to one of three positions. This could come in extremely handy if you’re trying to add fill light to some larger mammals where the fully focussed beam is too concentrated.

These images (click to view larger) show the beam pattern of a standard Canon flash at the wide and tele end of its built-in zoom, plus the MagBeam in its three different positions. I’ve also included the Better Beamer for comparison.

MagMod make a variety of flash accessories and they all revolve around the same magnetic adapter. This means that once you have purchased the Wildlife Kit (fresnel lens + mag adapter), it’s relatively cheap to get other MagMod items since you already have the mounting system. You can buy gel packs, grids and also masks to create interesting patterns using the fresnel lens. The rubber fresnel lens holder that is the main component of this Wildlife Kit also has a slot in it for inserting gels or masks, and the grids are simply magnetic so they can stack between the flash and the fresnel lens. Overall, it’s a super flexible kit that really lets you get creative!

If you’re shooting wildlife photography then quite simply I think this is a must-have accessory. The clever collapsible design and malleable rubber makes it easy to fit into pretty much any camera bag amongst your existing gear, and the increased 2+ stops of light is a help in many ways when you need to reach distant subjects. Even if your subject isn’t that distant, this will allow you to be much more efficient with your flash’s output, and therefore decrease recycle times and extend battery life.

As usual, I really appreciate when you guys use the links to buy your gear as I may make a small commission, at no cost at all to you. That’s what keeps things ticking and allows me to bring you this content!