PSA: Canon Users, You Can Lock Your Super Telephoto Lenses! 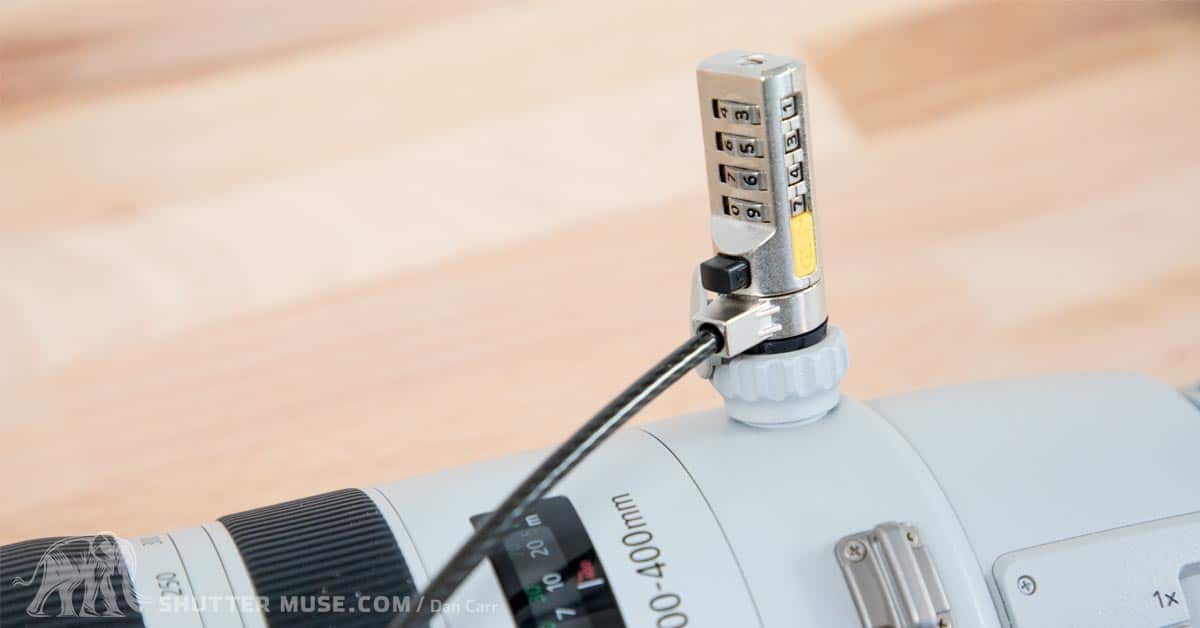 I noticed a comment recently from a prominent sports photographer that many of his colleagues were not aware that you can actually lock many of the Canon super telephoto lenses. All of Canon’s longer telephoto lenses produced since 2010 have a small slot for a Kensington-type security lock hidden in the knob that loosens the tripod collar. The feature was first introduced with the Canon 300mm f/2.8 L IS II and the 400mm f/2.8 L IS II in 2010, but has subsequently appeared on the 500mm f/4 L IS II, the 600mm f/4 L IS II, the 200-400 f/4 L IS (pictured on this page) and also the 400mm f/4 DO IS II (also pictured on this page).

Kensington locks are most often used to lock laptops, but having a lock for your super telephoto lens is a great idea because some of these lenses are worth more than the cost of a car! I’ve been in many media centres myself where lenses like this are strewn all over the place, and sadly I also know at least two people who have had significant amounts of camera equipment stolen at major sporting events. When you consider that a Kensington lock can be purchased for under $30, it seems like a no-brainer to add one of these to your photo kit if you’re using these kinds of lenses.

A good number of photographers are using rolling camera bags from Think Tank Photo, which have lockable zippers, and also cable locks on the bags themselves. This is definitely a viable alternative, but even then, given the low cost of a Kensington cable, and the high cost of the lens, I think it’s a good idea to keep one in your kit just in case you need to secure it temporarily when you’re away from your bag. Imagine shooting in a relatively public space when you have your camera to your eye, but a second camera on the floor at your feet with a super telephoto lens on it. With the Kensington lock, you can quickly cable that lens to your backpack, a guard rail or even yourself, giving you some warning if someone tries to sneak your precious kit away from you while your back is turned.

My preference is for the Kensington Combination Lock (model K64673AM) because this means I don’t have to carry a key around with me. If I was locking something at home, forgetting the key wouldn’t be such an issue, but imagine if you locked your lens in a more public place and then realized you don’t have the key! I think it’s definitely worth the extra $8 or so to spring for the combination lock version.

I don’t like to do it, but sometimes it’s necessary to leave camera gear in a car. If I put the lens in the back of the car, I can lock the cable easily around the mounting point of the seat. Of course a cable like this isn’t going to prevent a determined thief that has time and the right tools, but most thefts from vehicles are more opportunistic smash-and-grab jobs so it might save you a massive headache.