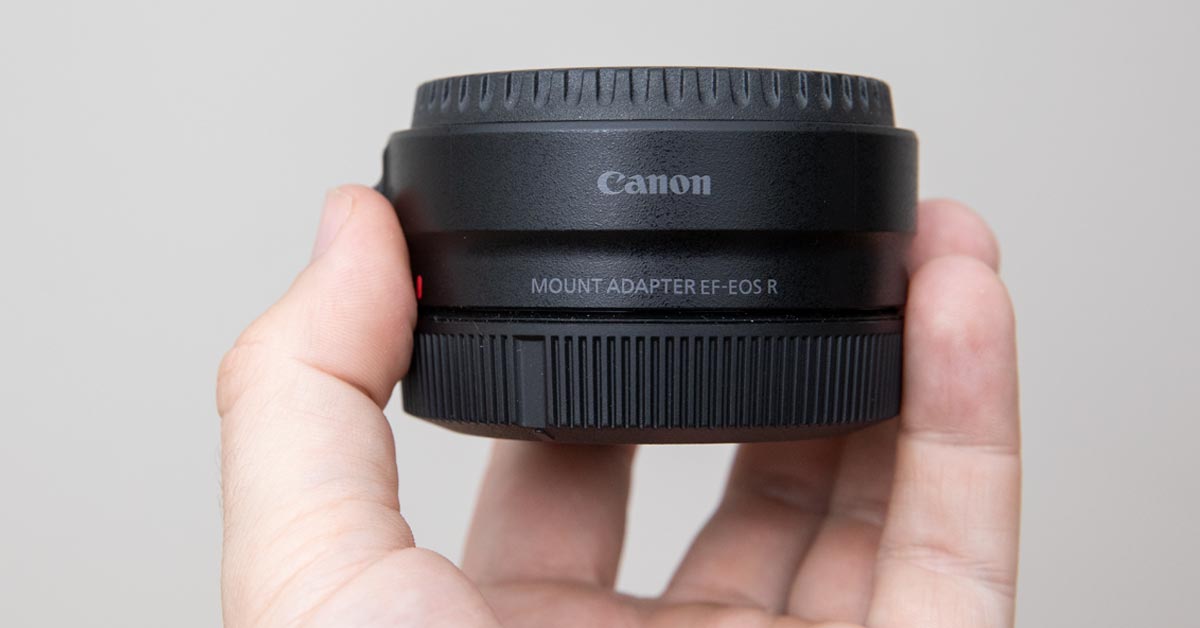 Canon launched a total of four different mount adapters that enable you to use EF and EF-S lenses on RF mount EOS R cameras. In this review post we’re taking a look at the most basic of these adapters, the Canon Mount Adapter EF-EOS R.

This mount sells for under $100 and allows full functionality of EF lenses when mounted to an RF mount. Autofocus performance should not be affected at all, although it is obviously equally dependant on the performance of the camera that the adapter is mounted onto.

Optical performance is also not affected because the mount adapter is essentially just a large spacer, it has no optical elements in it at all.

All this adapter is doing is moving the EF lens further away from the mirrorless sensor to mimic the space that would have been occupied by the mirror box on a DSLR.

The adapter is very solidly built, and it is dust and moisture sealed just like an L Series lens.

All of these things are great, but it shouldn’t be ignored that there are other adapter options out there from Canon which might be a better purchase. In particular, I’m a huge fan of the Control Ring Mount Adapter which adds significant new functionality to the lens in the form of a user customizable control ring that can be assigned to control aperture, shutter speed, ISO or exposure compensation. This adapter is twice the price of the basic adapter, but I actually think it’s worth the extra money if your budget is not too tight. All new RF lenses have a control ring on them, so using the Control Ring Adapter is a way to get a consistent feeling and workflow if you’re using a mix of old EF lenses and new RF lenses which is exactly what I’m doing myself. Read my Control Ring Mount Adapter review for more details on that one if you’re interested.

For those on a limited budget though, the cheaper standard mount adapter will still do the trick, and there are certainly no performance or optical benefits to using the other more expensive Canon mount adapters.

The same can’t necessarily be said for third-party adapters. There are several non-Canon EF-RF mount adapters appearing on the market, and I really would not recommend using them. They are slightly cheaper than this sub-$100 official Canon one, but you’re only saving a few dollars and it’s highly unlikely that autofocus performance will be as good with a third-party adapter. The Canon adapter is also built to a very high standard for what I would consider to already be an excellent price.

I don’t always advocate sticking to official products (ahem! batteries..), but in the case of this mount adapter I am going to do just that.

As always, it’s greatly appreciated when you use our links to make your purchases. We may make a small commission when you do this and it helps us bring you more content in the future. The adapter can be purchased at: