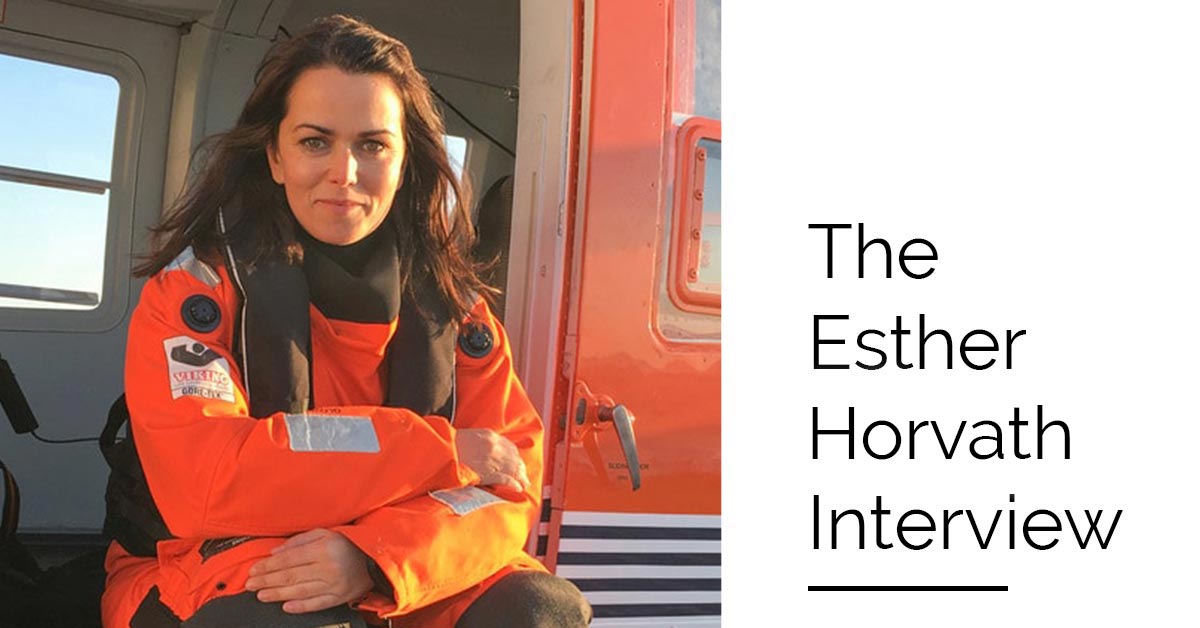 My next guest for this new interview series had just returned from a major expedition to Antarctica when I caught up with her via Skype. Esther Horvath is a documentary photographer based in Germany, and she’s worked on some amazing projects that have landed her images in the New York Times, the Wall Street Journal, Time Magazine and National Geographic.

Her focus is on documenting the effects of climate change on our polar regions, which means she’s travelled to some of the most remote, inhospitable places on our planet – and not only kept her cameras working, but returned with eye-opening images of the latest developments in polar climate science.

SM: Thanks so much for taking the time to talk to us today.

EH: No problem, it’s my pleasure and thanks for reaching out.

SM: You’ve done fascinating work in some pretty amazing places on our planet. How did you get your start in this very niche field?

EH: Research, research, research! A lot of the work I do is in places that are hard to get to and hard to work in, but there are several opportunities to do this work. It can be with institutes or go on expeditions funded by companies, or even pursuing grants. National Geographic has some really great grant programs for exploration.

SM: You’ve just come back from an amazing expedition to Antarctica. Can you tell us a little about that trip?

EH:  Yes, I was at Neumayer Station, a German science base led by the Alfred Wegner Institute. I was there documenting both the science happening, and life at the station. I’m interested in showing what the daily life is like there.

SM: When you go on these trips, you’re living that daily life in a very experiential way too. You’re in some very extreme and harsh environments, what are of the challenges of working in those conditions?

EH: Each place has different challenges. Weather and core temperature are definitely big issues. But it’s interesting that even in the coldest temperatures like -40C, my biggest fear is sweat. If you sweat, you can get *really* cold and sick very quickly!

My other concern is keeping my equipment working. Batteries can die very fast, and even focus and zoom freeze up and stop working.

SM: How do you work around that?

EH: With my lenses, I try to work at f16, to ensure everything will be in focus, and I prefer to work with fixed, prime lenses rather than zoom. If I’m working with a zoom, I’ll set it to 35mm because I know after a while I won’t be able to change it.

SM: And you’re using DSLRs for most of your work?

EH: In some situations [like the image below] there is no other option but a GoPro, but otherwise all of my work is using DSLRs.

SM: You’re capturing some inspiring images from some amazing places on our planet. What inspires *you*?

EH: What motivates me is the changes happening in the polar regions, in particular the arctic ocean. It’s the most rapidly changing environment on our planet. As a documentary photographer having access to these places, I feel a responsibility to document the changes there.

SM: The work you’re doing seems so effective at putting a face to the science story rather than it just being about the numbers in an academic report. Can you tell us a few of the people who have inspired you to take this approach?

EH: There are so many. I’m usually most inspired by stories, and how photographers work to tell those stories. Some names I would mention: Amy Vitale, Christina Mittermeier, Paul Nicklen, Brian Skerry. But there are lots more whose work inspires me, and I’m always looking for photographers who can really tell a story.

SM: I was reading about the program “Girls Who Click” that you’ve worked with. What is that initiative about?

EH: Girls Who Click is led by Suzi Eszterhas, with the goal of educating girls in this male-dominated field. It’s estimated at just 20% women in photography right now. The organization offers free workshops for girls, trying to inspire the next generation of conservation and wildlife photographers. The program started in the U.S., but we’re expanding to offer workshops in Europe this year starting in Germany.

SM: It sounds like so much of the work you’re doing is purpose-driven, aimed at creating change in the world around us. Do you do any personal work that’s not for a project or client?

EH: Right now, the climate story has really mixed everything together. My main passion started with the arctic ocean. That’s what I’ve felt the most connected to. It started as a personal project and story, but it’s now become the area that I work in. All of my other personal work is still climate-related. (Editors note: This response was edited slightly to remove a factual inaccuracy about the Inuit language.)

SM: Well that passion has certainly taken you to some fascinating places that not many people get to see. I’m curious, what’s next? Are there any places that you want to go? Something on your bucket list?

EH: My biggest bucket list place would be the International Space Station – haha! But realistically, I just want to get back to the arctic ocean. Specifically following up on the latest research on arctic sea ice. With my new project, we are focused on the life under that ice, and how the changes occurring are influencing the biodiversity of the arctic ocean.

SM: Wow. Once again, that sounds like it would be an incredibly challenging environment to work in as a photographer. Beyond the equipment, is there any special training that you have to do?

EH: Yes, I have to complete survival training for any type of helicopter or airplane crash. In this case, it’s about how to survive landing in the arctic ocean. I did two days of training for this with the U.S. Coast Guard.

Another one that doesn’t sound nice but is very important, is training in how to shoot a polar bear. That’s for our own safety, and the main goal is to scare away the bear and find a safe place. So we have one gun that makes just a very loud sound, but in the case of a life-threatening situation we also have a real gun which I’ve had to learn how to use.

SM: That’s definitely some extreme training to go along with the extreme environment!

To shift gears a bit, if you had the opportunity to go back in time or do some things differently from the path you’ve taken, what would you do?

EH: Oh, really good question. First of all, I wish I would have started earlier with photography. I studied economics, which was my Master’s degree and first career.

I would also try to trust myself more, right from the beginning. If someone would have told me when I first started studying photography six years ago at the International Centre for Photography, that I would be where I am now, I would have difficulty believing them. But it’s possible. I’ve really worked a lot over the last six years, but it’s important to trust yourself and find what you’re passionate about.

At the beginning of my photography career, I did a lot of different things – shooting daily assignments, shooting celebrities for the entertainment industry. I tried all of these things, but had a dream of what I wanted to be. I finally got an assignment for Audubon Magazine, and after I came back from that assignment, I decided that I had to focus all of my time on the dream and the photography that *I* wanted to do. So I cut out all of the other photography and stopped doing daily assignments and celebrities. I started to do the research I needed to work with scientists and institutes doing science work in the polar regions.

SM: That’s great. I think a lot of photographers struggle with finding that balance between what they want to shoot and paying the bills. How do you find a way to say ’no’ to those distracting assignments?

EH: There are some fortunate photographers who don’t need to worry about that, but I wasn’t one of them. I had to make sure I had enough assignments and work to pay my bills, but beyond that. I eventually let go of everything else that wasn’t necessary so I was free to go after my dreams.

To do this, I read a lot of scientific publications and books. It was important that I have a strong knowledge of the differences between sea ice, ice shelves, ice sheets, ice caps – and to understand the changes happening to them and what they mean.

SM: Is there any advice you’ve received over the years that’s been particularly beneficial?

EH: A few years ago, one of my editors at National Geographic gave me some feedback. She told me to always shoot from your heart, not your head. Reading and learning about polar science has helped me to stay in my heart and shoot from there. That’s definitely helped my photography.

SM: Thanks so much, Esther. I think our readers will gain a lot from hearing your experience and seeing some of your amazing images from around the world.

EH: Thank you very much – I truly appreciate the interest in my work, and thanks for contacting me!