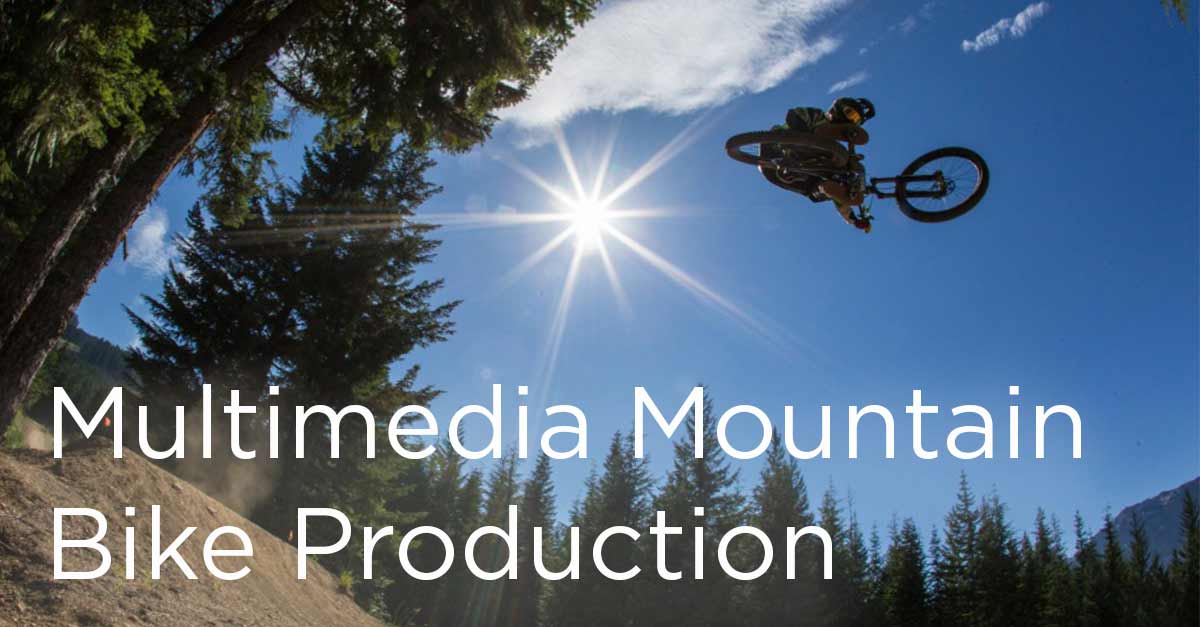 Shooting the world around us is what every photographer and filmer does, it just so happens that for as long as I have been shooting, that world has been full of big mountains and bikes.

My name is Jacob Gibbins and I’m a freelance photographer, filmmaker and one half of Aspect Media based in the UK. I’ve been self-employed and travelling the world photographing and documenting the sport I love, mountain biking since I was 15. Now 22, things are busier than ever and my photography has evolved from just snapping some photos of my mates down the local trails, to spending most of the year living out of hotels and suitcases.

A lot of my recent jobs have involved shooting both stills and video, so in this post, we’re going to talk about this and I’ll pass on a few tips for shooting away from the studio. When I first picked up a camera, which wasn’t all that long ago, the worlds of video and photo were very separate. Cameras only did one thing and you marketed yourself as one or the other, photographer or filmmaker. These days the lines have blurred though and this makes it an exciting time to be a creative professional.

As I said above, gear is now capable of shooting top-level stills and video all in the same camera. This is pretty new to everyone and the industry is still working out how to use this technology and price it. It’s us, the photographers and filmers that need to keep up or get left behind.

I personally own a Canon 5D MK3 as my main camera for stills and video. However, I’ve also just invested in a Panasonic GH4 for its rich video feature set and vastly superior image quality when compared to the 5D. The camera is just the start though! There are a million and one other things to consider when building a kit for shooting both video and stills.

Some things are only good for one or the other, like flashguns or sliders. But others such as Tripods, LED lights, lenses and bags are all things you will use for both. It’s in these areas where it’s best to invest your money.

These are the main parts of my kit

The Job – A Trip To Canada

For this article, I based it around a recent trip to British Columbia in Canada and shooting an episode of an online series following two mountain bikers on trips around the world. This would be the 3rd episode of the series so we’d already done this a few times with this crew and had a good idea how to work and get what we needed. The output needed to be a 5-minute video episode of the week’s antics, as well as enough still images to use with the videos release and an article in a magazine.

The main thing to remember when you have to carry your gear up mountains with you is to only take what you need and make the gear you do take count. When you’re talking steady cams, tripods, multiple camera bodies, lenses and all the other stuff, this soon starts to add up and you have to work out how best to get all the required media in the time you have.

There are the two ways of doing this that I find work best:

Video and photos require a totally different mindset so I don’t tend to find that chopping and changing between them constantly works very well. One is all about light and composition, where the other may have those elements but also add the extra dimensions of camera movement and sound.

Sometimes we did set aside whole days just for one medium or the other, and other times where we drove a little way to one specific location, I went for the 2nd approach above as we had access to a truck to shuttle us up the hill for a second run.

These are all things that will decide how you approach a shoot with both video and stills needed:

If you are just documenting a trip you tend to shoot a lot. You shoot everything with a loose plan and storyboard in mind, but mainly you piece it together after the trip once you know how it all panned out. If you go in with a more specific shot list, or idea of the required output like this trip you can plan the scenes a bit more carefully to best fit in stills and video.

Check out the completed episode of the show below and enjoy some of the photos!

Jacob is a UK based sports photographer and filmmaker who travels the globe following the world's best mountain bike athletes.