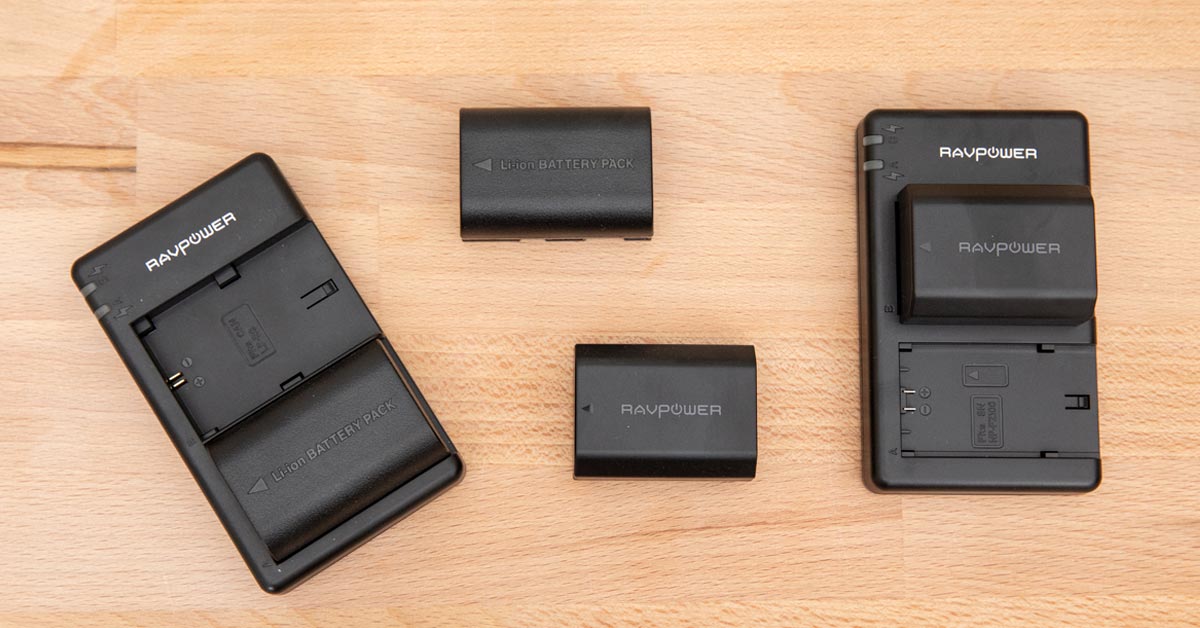 Most people are aware of the price discrepancy between OEM camera batteries and third-party batteries that are readily available from online stores such as Amazon.

For example, the OEM Canon LP-E6N batter for the Canon 5D Mark IV costs about $60 for just the battery, but you can buy a pair of third party batteries and a dual charger for about half that price from third parties.

This month I have been testing out third-party batteries sent to me from a company called RAVpower. I was already familiar with the many USB battery packs that they make, but until recently I actually wasn’t aware that they also make camera batteries for many different camera models.

For my review, I tested their versions of the Canon LP-E6N battery and the Sony NP-FZ100, though they also make various batteries for Nikon and GoPro.

What I liked about these batteries is that the dual slot charger that comes with them is powered by USB and includes skinny, lightweight cables too. This makes it really easy to use the charger in your car, or in your camera bag when connected to a simple USB battery pack. Using something like this 26800mAh RAVpower battery pack, you would be able to recharge a camera battery roughly ten times. That would be a whole week of shooting for most people!

You could also connect the charger to a small solar panel, providing you with a lightweight charging solution on long off-the-grid treks. In the past I have used Goal Zero solar panels for this purpose, and wrote about usb charging camera batteries with solar power in a previous article. You could definitely switch these RAVpower charges into place instead of the USB charger mentioned in that previous article.

The USB dual charger is also impressively thin and lightweight, and you can use it to charge OEM camera batteries if you already have a few of those. In fact you can buy the charger on its own if you simply like the sound of that, but would prefer to use your existing batteries.

The other thing that is worth pointing out is the RAVpower batteries are actually a higher capacity than the OEM versions. For example the OEM Canon LP-E6 is 1800mAh, but the RAVpower version is 2000mAh which means you’ll get more shots per charge.

Overall I was impressed with what I saw from these products. You get an awful lot for your money, and I really likes the USB charger. In the past I have purchased Wasabi Power third-party batteries for many of my cameras, but I much prefer the smaller, USB charger charger that comes with the RAVpower batteries and I think this will be my go-to solution in the future when I need spare batteries.