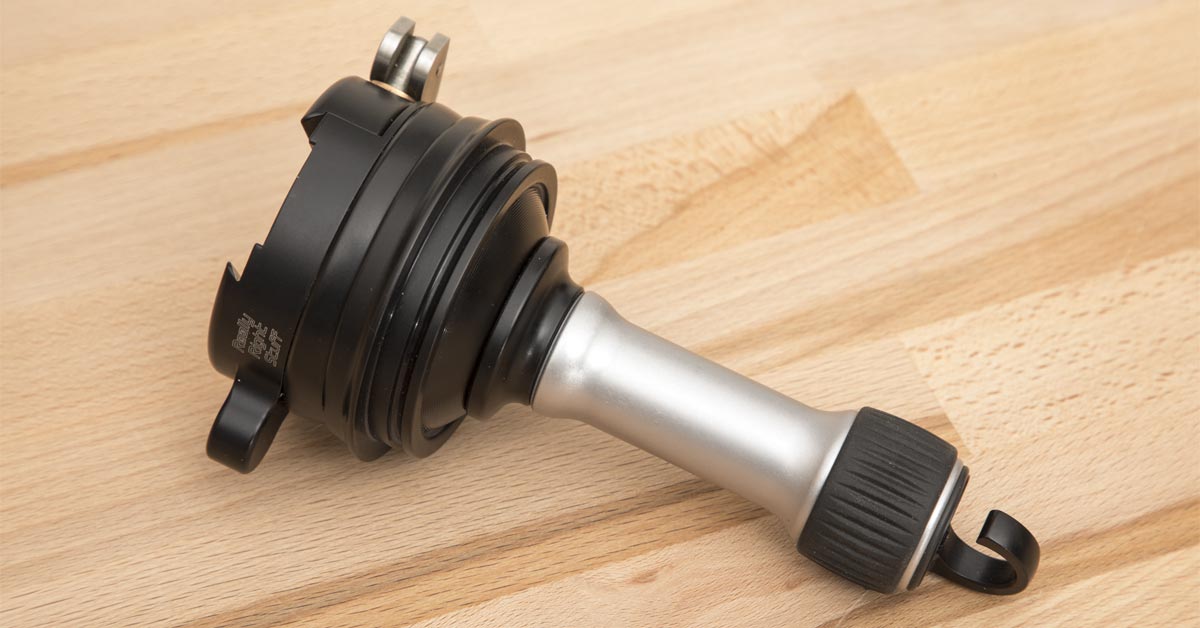 Really Right Stuff make levelling heads for their Series 3, Series 2 and Series 4 tripods and in this review we’ll be taking a look at the Series 3 TA-3 levelling head which sells for between $195 and $310 depending on the handle options and clamp that you specify. The head weighs 12.2 ounces and with the twist of the locking handle you can tilt it up to 15 degrees in any direction. When you set up your tripod, all you have to do is roughly level it with the leg locks, and then use the levelling head, with built-in bubble level, to finely tune the tripod top to a perfectly level state.

The TA-3 head also includes the TA-3-VB 75mm video bowl as part of the package. If you have a third-party fluid video head with a 75mm ball on the bottom, you can quickly attach that to a Series3 tripod using this setup, although the TA-3-VB is also available on its own.

Why Use a Levelling Head?

In many instances a ballhead is all you need in order to level a tripod head for a single image. The difficulty comes when you’re shooting panoramic images, or using a movable head such as a gimbal or fluid head for video shooting.

If the top of the tripod is not perfectly level then as you rotate the camera, whether for photo or video, the image will diverge from the horizontal. In panoramic photography you’d see that your images form a wave shape when stitched together, and this can be a real pain in the ass because it means heavy cropping is required to get a straight image, and you lose a lot of the frame. If you’re using a gimbal head for tracking moving wildlife with your camera, as you swing the camera around, you’d have to constantly readjust the vertical axis, to compensate for the diverging camera movement. This makes precise framing very tough when rotating fast, and it becomes incredibly difficult to track small things like flying birds.

You can level a tripod without a levelling head, but when you need precision, doing this by adjusting the lengths of all three legs is an exercise in extreme patience. Realistically it simply take too long, but with a levelling head you can do it in two seconds.

Really Right Stuff make stellar support gear, and the TA-3 in these photos is no exception. It’s designed for their Series 3 tripod, but you can also use a bowl adapter and use it on a Series 4 tripod as well (called he TA-4-AA3). The quick release plate on the top is an optional extra, but I highly recommend it if you’re going to be swapping between a ballhead and a pano head or gimbal.

The other choice you have to make is the handle on the bottom. I have the standard handle here, but there’s also a low profile knob instead of a handle, or you can get a shorter handle that doesn’t have a hook on the bottom. They’re all equally easy to use, with the main difference simply being that you can get the tripod lower to the ground if you use either of the two shorter options. Obviously you also lose the hook as well, but I’m really not sure I’ve ever used it anyway because the Series 3 tripods are already incredibly stable. To be honest, I wish I’d got the low profile knob version when I bought it, but you can always swap the knobs and handles around afterwards because all the parts are available individually, and are easy to switch yourself.

My main reason for having a levelling head is for use with my PG-02 gimbal head, and for me it’s a must-have item. You never know when wildlife is going to surprise you, so a fast tripod setup time is really important, and a levelling head simply speeds up the setup process. As with all Really Right Stuff gear, it’s a pricey item, but given that you’re going to be putting it on a $1000 tripod, I suspect this won’t necessarily be a problem for a lot of people. Once you get into the RRS range of gear, you know you’re buying a tripod setup for life! The price isn’t without justification though. The TA-3 is beautifully made, and the simplicity of the head makes it a breeze to clean it if you ever get it sandy or dirty. Whilst you can also use the RRS Universal Levelling Head on top of a Series 3 tripod platform, I don’t like that option as much as this TA-3 head. The Series 2 levelling heads, and the Universal Levelling Head are much harder to clean, and the locking collar isn’t nearly as easy to use as the simple twisting handle on this TA-3.

Really Right Stuff are an American company, and fine folks to deal with directly. However, B&H also stocks all of their products, and likely offers cheaper shipping options for most people. I’m in Canada and B&H will ship to me for free on this product, and also let me pre-pay all tax and duties. The same can be said for many other international destinations and of course free shipping is available in the US as well.