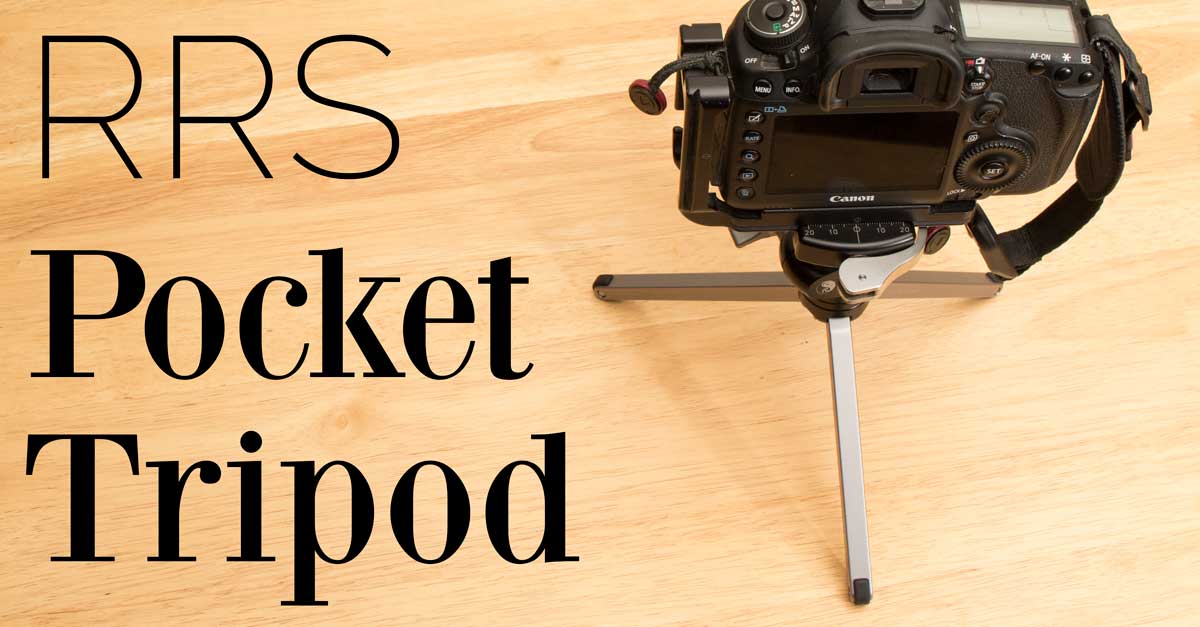 NOTE: In 2016, RRS introduced a new version of the TFA-01 called the TFA-10 Ultra. It’s the same size as the original, but it features a ratcheting leg lock system instead of relying solely on friction. This means that its capacity to hold heavier camera setups are a variety of leg angles is greatly increased. The price difference between the regular version (reviewed on this page) and the Ultra version is about $20. As soon as the Ultra version came out, I picked one up, and have since stopped using the older version. The olde one is still fine, but I love the added stability of the Ultra version, and truly believe it’s worth the additional money. Much of what is said in this review is still relevant to the very similar Ultra version too, but I felt that I should now clarify that I would actually recommend the new version to everyone, unless you genuinely only plan to use it with a tiny camera like a GoPro or a point and shoot.

NOTE 2: When I first reviewed the TFA-01, I used the BH-25 ball head with it. Since then, RRS launched the BC-18 MicroBall, which I think is far better suited as a pairing with the tripod. I no longer use the BH-25, and have switched entirely to the BC-18 for use with clamps and tabletop tripods. The BC-18 is smaller, cheaper, lighter and actually holds heavier weights without creeping.

Not long ago, I published a quick review of the Really Right Stuff Safari Clamp, a support accessory that’s recently found a permanent place in my travel kit due to its small size, but high load capacity. Well today I thought we’d take a look at the other pocket-sized RRS item that I carry around a lot, the TFA-01 Pocket Tripod. In fact, I’ve had the TFA-01 for a lot longer than the Safari Clamp, and I’ve mentioned it several times in older posts like; 21 Essential Items For The Travelling Photographer. A more detailed look at it has been on my to-do list for some time, so here we are!

The package that I have is the Really Right Stuff TFA-01 with the lightweight BH-25 ball head. This ball head has a load capacity of 4KG, but weighs only 7.8oz. If you need something a little beefier, a BH-30 will also work well on the TFA-01, and this has a capacity of 6.8KG and still only weighs 11.2oz. As well as a higher capacity, the BH-30 also has a separate panning base knob which the BH-25 does not.

My experience is that the BH-25 can hold my Canon 5D Mark III with a 24-70 f/2.8 II mounted to it if you really crank hard on the locking knob. I would not want to use it for super long exposures of many seconds, but anything up to and around a couple of seconds is just fine with me. If I was using a pro sized body, or any lens that’s longer than a 24-70, then I would definitely switch out to my BH-30. One of the main plus points to the TFA-01 design is that you can tighten the legs up using a hex key so that they do not open outwards from the weight of a heavy camera setup. Most other tabletop/pocket tripods lack this feature and the result is that you are forced to use the tripod in its lowest position with the legs full splayed outwards. I have found the legs on the TFA-01 work lose a little more than I’d like, but I carry a hex key in my memory card wallet so it’s not a huge deal. At least the option is there with this tripod!

As some of the example photos show, there’s a couple of main benefits to having a sturdy pocket tripod. First of all, you might be able to sneak it into a place that has the dreaded “No Tripod” signs. The tops of tall buildings are a great example of this, and I used mine when I visited the top Rockefeller Centre in New York City. The second advantage is that its small size means you can carry it around for a lot of those times when you simply wouldn’t bother to take your larger tripod. Inevitably, this leads to images that you otherwise would not have gotten. The saying says “the best camera is the one you have with you”, well, the same thing goes for tripods as well! Your fancy 6ft, carbon, $700+ tripod is no good if it’s in your hotel room while you are out shooting.

You have to think a little differently if you are forced to use such a small piece of camera support in a tripod-free location like a museum. In this situation, walls are your friend, as are L-Brackets that let you clamp the ball head to the side of the camera! The rubberized feet of the tripod grip nicely on a wall if you apply some sideways pressure. With a bit of practice you can easily get tack sharp images with a shutter speed ten times longer than you could hope to if you were just handholding the camera. Even if the long shutter speed isn’t a requirement, it can help your HDR shooting by preventing misaligned images.

The TFA-01 works great for low angle video as well, seen here with my Canon XA20

I’ve Tried The Others

Ok, yes, there are many other pocket tripods out there that are far less expensive than the Really Right Stuff one. I’ve tried several other options from Manfrotto, Giottos and others. All of them got returned. They simply can’t hold the weight of a pro camera setup. Yeah maybe you might get away with finding one that will hold a small mirrorless rig. And I’ve no doubt that a point and shoot camera would function well with some other options as well. But I’m here to tell you that any decent sized camera with a reasonably large lens, doesn’t stand a chance with any of the other options I’ve tried.

Have you found other options? If I’ve missed something, please do leave a comment at the bottom of the post!

For now though, if you want to hold a full sized DSLR, and be able to fit a quality zoom lens like a 24-70, the TFA-01 is going to be your best option. That, or using the Safari Clamp that I previously reviewed.

I’ve been using this little thing for a few years now, so conclusions can be drawn from a great number of photography trips. There’s no doubt that this has got me photos that I wouldn’t have achieved without it. Given that I tend to spend a good amount of money to get to the places where I take photos, the price of the tripod isn’t something I’m too worried about. Like I said, there isn’t, as far as I know, anything else of this size that can hold this kind of weight.

It’s not entirely without negatives though. This is a pretty heavy item to carry in a pocket, and whilst it does fit in small places like a jacket pocket or a shoulder bag, it’s noticeable. I would love to see the guys at RRS find a way to make this a bit lighter. Also the top of the tripod, that mates with the bottom of the ball head, is too smooth and shiny. It could do with a simple rubber piece on top to allow the ball head to grip it better. I often find the head comes loose and I don’t want to use LockTite since I’m always moving the head around onto other support options.

Really Right Stuff gear can be purchsed directly from RRS, or from B&H Photo. In this post I have linked to B&H Photo because they offer free shipping in many circumstances, and offer the ability to pre-pay tax and duties on many international shipments. Some people might prefer to shop directly from the manufacturers, and I’ve done that many times with RRS. They also profivde exceptional customer service.