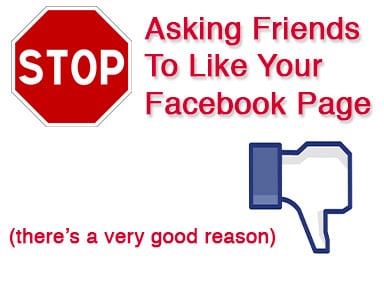 We’ve all seen it, and many of us are probably guilty of doing it ourselves but I’m here to tell you to STOP now, and for a very good reason.  First I want to preface this by saying that whilst I am coming at this from a photographer’s point of view, this is absolutely relevant to almost every business that sets up a Facebook page.

Let’s start with a broad view on Facebook from a business perspective; it’s a marketing tool.  A marketing tool should help you get new business or make you money in some way, otherwise it’s a waste of time and your time is worth money because time spent messing about on social media is time better spent doing whatever it is that your business does.  For most of you reading this, your business is photography.  Your Facebook page should help you to develop new leads for your photo business, sell prints or sell workshops.  If it’s not doing those things then it’s almost certainly a waste of time.

Facebook has changed the game big time at the end of 2013.  They pushed out an update to their algorithm that caused catastrophic downturns in the reach and engagement of Facebook page posts, updates and photos.  The result is that now for any update, link of photo you post, your content is only going to be seen my a miniscule percentage of the people who ‘Like’ your page.  In many cases it’s less than 10% and in the worst cases I have heard of as little as 2%. Ignite did a study of 21 brands Facebook pages recently and found that out of the 21, 20 of them have seen a decline in reach and engagement since the beginning of December 2013. The average decline they have seen was 44% and some were as high as 88%.

Ad Age obtained a sales deck that was sent out to Facebook partners, entitled “Generating business results on Facebook” which for the first time was a little more open about their plans for change. 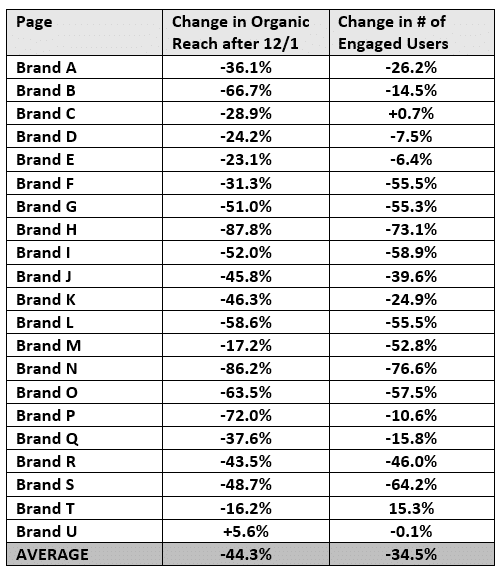 Now the light bulb is probably starting to go off in some peoples heads now as you read this…… you can see the problem here can’t you?  If only a tiny number of your fans are going to see your content you have a much much lower chance that this content you are posting is going to translate into new business.  If you have badgered your 500 friends to death until the all ‘liked’ your page, now you are in trouble because your posts and updates are more than likely wasted on them!  You don’t want that now precious small percentage of your followers who see your content to contain any friends and family.  Every friend or family member that sees your update means that a genuine fan or potential client did not see your update!  You see the problem we have here now?

Let’s say your pages has 1000 likes and 500 of them are just your friends and family.  You post a set of photos from the latest shoot you did and Facebook shows that photo set to 8% of your fans.  That’s 80 people, but because half your ‘likes’ have come from friends and family, statistically only 40 of those people are genuine fans or business leads.  You just halved the effectiveness of your Facebook page!  Now when you start considering actual post engagement as a small percentage of the reach you’ll start to get to some really tiny numbers since the percentage of people who like or comment on a post or photo is a tiny percentage of the reach, in fact it’s usually less than 1%.

We have to get out of the mentality that getting more ‘likes’ on a photo or status update is anything more than a massage for our ego if they are coming from friends and family.  You need to get great content in front of potential clients and that’s hardly likely to be your uncle or your high school friends.  If you’re a photographer and you make great photos I’m pretty sure that all your friends already know this and whilst in the early days of Facebook pages it didn’t really matter, I’m here to tell you now that you need to stop inviting your friends and family to like your page.  You’re actually permanently hurting the potential of your Facebook page as a useful marketing tool because there’s no way to go in and delete all your friends and family later down the road.

I’ll hold my hand up and say that I was absolutely guilty of doing this when I first started my page, but back then nobody really foresaw how Facebook was going to handle this.  Had I known what I know now, I definitely would not have done it.

But Wait, Here’s The Real Kick

Of course Facebook has a solution for you….. pay them money.  That’s what it all comes down to.  They want businesses to pay to reach their fans now, and you can hardly blame them.  They’ve given us a free advertising platform for many years and as a public company they have a fiduciary responsibility to their shareholders to make money. We’ve all seen the button to promote our posts and help it reach the news feeds of all our followers and fans.  But here’s the real kick, there’s no way to distinguish between real fans and your friends when it comes to hitting that ‘Promote Post’ button.  This means that if you go this route to reach your fans, they are going to end up charging you money to show photos and links to your own brother, cousin, uncle or long-lost high school friend.  What a crappy way to spend your hard earned cash!

Those That Buy Fake Likes Are In Real Trouble!

I want to add another note here because I’ve seen an alarming number of people in the creative industry buying fake likes in recent months.  These people think that it makes them look good to have 10 or 20,00 likes and in some case more than this.  There are many easily accessible services out there that will happily sell you fake likes for a small sum.  Most of them are in Thailand and Bangladesh where they have rooms full of people using fake accounts clicking like buttons all day long.  It’s a pretty sad state of affairs from both ends.  The photographers that purchased thousands of fake likes have now screwed themselves royally because in their cases a huge percentage of their ‘fans’ are fake!  Far more than the 50% from my previous example of friends and family.  I’ve watched a few people recently who I suspect now have about 80% or more of their ‘fans’ from fake accounts.  In these cases there’s a possibility that their posts and photo updates will now not reach a single true fan or business prospect!  I have to shake my head in wonderment at what these people were thinking in the first place?  Did they think that they would get more photo business because prospective clients thought that they must be a good candidate for the job due to their swelling Facebook page numbers?  If that’s really the case then it’s no different to lying on your resume.

This update to Facebook is changing the way that all businesses should use it.  It’s no longer a must-use marketing channel as far as I’m concerned and even huge photo websites like F-Stoppers have recently weighed in on the subject to voice their concerns and plans to focus on other social networks instead of Facebook.  Their average reach dropped from 42% right down to 7%.  My personal feeling is that e-mail marketing will come back to the forefront of marketing tactics and I’ll be devoting a number of feature posts to this topic in the coming months.  There are many great photographers using e-mail effectively and I think it’s going to become much more prevalent in the coming months and years.  Stay tuned!