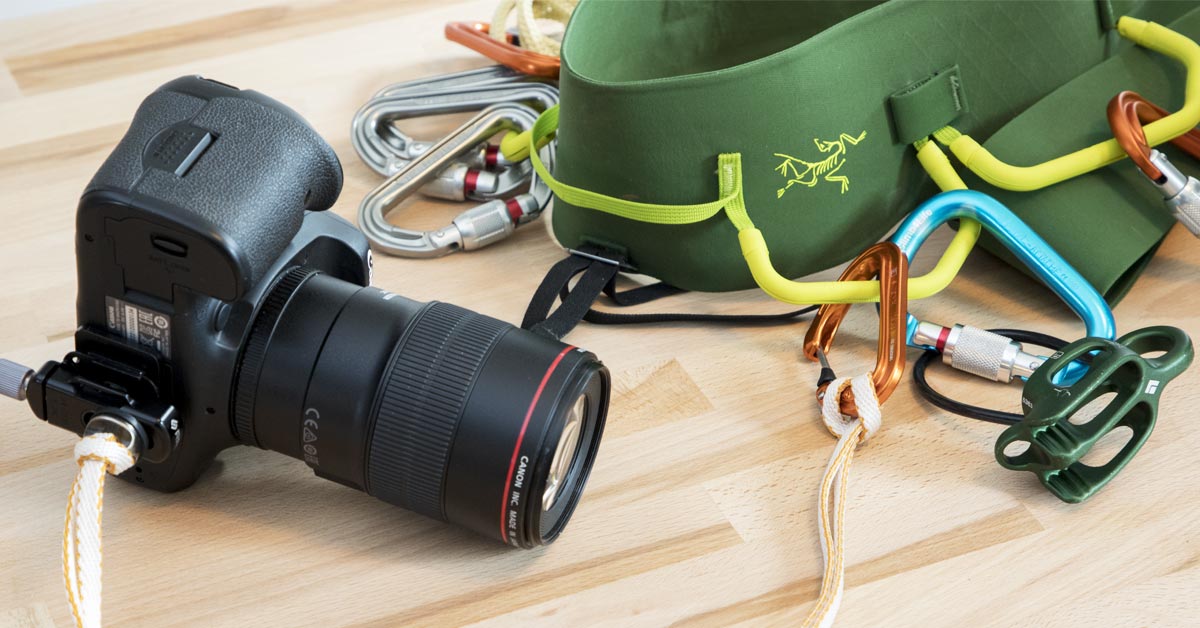 I recently began to learn how to climb with the intention of using those new skills to capture some interesting imagery for my portfolio. Learning how to climb isn’t something that can be done overnight, but I’m gradually finding the time to get out into the mountains to practice. My climbing skills and my rope skills are improving every month, and I’m beginning to figure out the necessary systems to rappel into previously inaccessible places, and ascend and descend ropes to put me into positions for capturing the images I’m after.

While I was trying to figure out how to carry my camera while I’m either climbing a wall, or rappelling into position from above, I realized that I needed to create some sort of tether for my camera. Dropping a camera and lens would suck from a financial standpoint of course, but really my main concern is for the people beneath me. A full frame Canon camera with a decent lens on it could easily kill someone if it hit them on the head from a good height.

In the past I’ve also had cause to use a tether for my camera when shooting aerial photos from a plane or helicopter with the doors removed. Loose camera equipment flying out of the door and into the tail rotor could easily bring a helicopter down, so you definitely want to make sure things are safely secured. Since I usually end up in the air a couple of times a year for one reason or other, and also intend on using my newly acquired climbing skills much more often now, I thought it would be a good time to put together a permanent camera tether to keep in my kit.

I realize that with some of the items in these shopping lists there might be other brands offer similarly useful things to do the job. It’s not my intention to say that these are the only ways to do this, but rather give people some inspiration for a great starting point, and share some of the knowledge I gained through my own experiments. For example, I experimented with three different brands of slings for the tether (Black Diamond, Mammut, Petzl) before coming to the conclusion that the Mammut ones are best for the job in my opinion, even though the other two options still perform the required task of tethering a camera in a safe fashion.  If you take my designs and copy them in their entirety it’ll be easy and I’m sure you’ll be very happy with the solution, but there’s certainly other ways to get to the solution as well. Read on further down the article to find out why I selected these particular Petzl carabiners.

Note that the shopping list for each option includes a 60cm sling (some people call these runners, same thing). I have found that a 60cm length is long enough for me to tether a camera to my climbing harness and still be able to raise the camera to my eye without running out of length. If you are particularly tall, you might need to look at a 120cm sling instead. Sadly nobody makes Dyneema slings in any lengths that fall between 60cm and 120cm. A longer 120cm sling might also be useful for a variety of the non climbing situations that I outlined in the previous section. Personally,

If you aren’t using any sort of tripod quick release plate on your camera then this simple setup is all you need to get started.

Many people, myself included, have an Arca-type tripod plate on their camera for quickly attaching it to a tripod. This means that the 1/4″ 20 socket used with the Black Rapid FastenR is occupied. Whilst you could remove the tripod plate to use the harness, and continue with Option 1, this means that you have to remember to carry a tool with you for removing the plate, and it’s also quite likely that you’ll forget the plate at some point once you have removed it. We’ve all been in the situation where we have no tripod plate, and it sucks! My advice is to use the fantastic Really Right Stuff B2-FABN Micro Clamp. This little thing is truly multi-purpose, so whilst it does increase the cost of this tether setup, it’s an item you can keep in your Photography EDC kit and use for many other purposes.

To start with, the B2-FABN Micro has two 1/4″ 20 sockets on it, so you can screw the Black Rapid FastenR into either of them depending on how you want your camera to hang once it’s on the tether. It also has a third hole on the bottom which can be used with QD quick release products. This means you can use QD Swivel attachments with your day-to-day camera straps, or camera straps that already have a QD mount, and easily connect these to your camera as well. If you aren’t familiar with the QD system, it’s used with a lot of firearms products, but is starting to gain traction in the photography industry as well thanks to Really Right Stuff’s push to include the system on their products (vide0 here).

If you’re looking to create a “set and forget” camera tether kit then I also recommend adding a 120cm sling and a second carabiner to your kit. The second carabiner is particularly useful for attaching the camera end of the tether to a climbing harness when the camera is in your bag and not yet attached to your tether. From a climbing standpoint, this also means that you have a useable multi-purpose item hanging on your harness that you can use in place of a draw if needed. The 120cm sling is useful when tethering your camera to something in other precarious situations, for example when shooting from a high vantage point like a bridge. The 120cm length will give you added length to girth hitch the whole thing around something like a railing.

Why The Petzl Ange-S Carabiner?

I looked at a lot of carabiners before deciding this was the right one for the job. I wanted something small and light that allowed me to carry the tether in my camera bag “just in case”, but I didn’t want to use one of those non-rated carabiners that many stores sell for using with your keys. When you can get a fully rated clibing carabiner for just a few dollars more, this made much more sense. From a safety standpoint, this means that you also don’t have any of those non-rated biners on your harness which might be accidentally used in an emergency. The Ange-S is also small enough that it can fit through the hook on the underside of most tripods without much of a fight. This extends the functionality of this device because it gives you a much easier way to hang heavy items on a tripod for added stability (see photo). Essentially, the Ange-S was the smallest fully rated carabiner I could find, and the wire gate makes it easier to fit through the tripod hooks, whilst also keeping the weight down to a minimum. The whole setup can easily be stashed in a camera bag pocket for emergencies or unexpected helicopter rides(!).

The small wire gate Ange-S makes it easy to use the tether to extend the hook on a tripod. It’s usually a pain in the ass to hang a camera bag right beneath the tripod base where the hooks are, but the tether makes it much easier. Make sure you double up the sling though as you don’t want your bag to have too much room to swing from side to side.