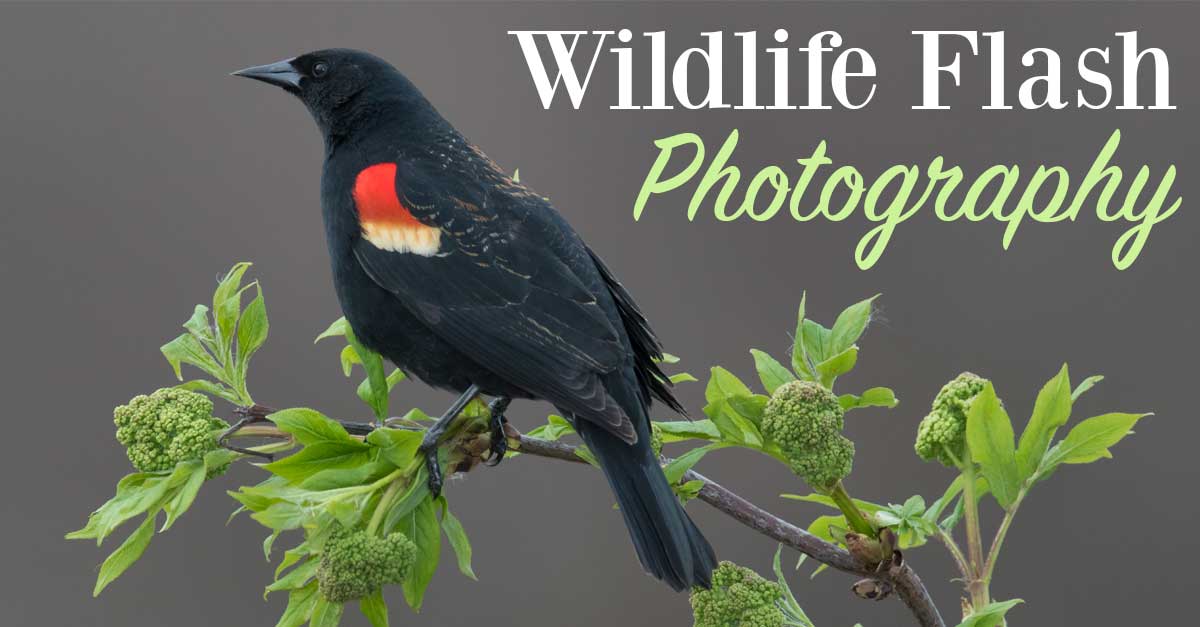 I recently went on a little mission to try and capture some images of snowy owls near Vancouver, BC.  Whilst I didn’t find what I was looking for, I spent some time shooting a few other birds in the area and I snapped a picture of my setup and posted it to Instagram.  I got a few questions from people asking I was using a flash with my long lens, so I thought I’d show an example because this is an important lesson in wildlife photography.

In this setup, I’m using a Canon 7D Mark II and a Canon 200-400 f/4 L IS (review) with a Canon 600EX RT flash sitting in the hot shoe.  The weather on that day was overcast, and that’s an important factor in the decision to use flash.  On a very bright sunny day, you might come across an animal in the shade, and a flash would help you to balance the light in the shade with the brighter background light. On an overcast day with even, diffused lighting, why use a flash?

The answer is all in the eyes! Many animals have very dark eyes and they can look like a black hole when there is no direct sunlight on them providing a catch light.  A flash can give you back that catchlight in the eye and make the animal look much more alive.

They key to using flash in this way is to use it as fill light, not as a key light.  Fill flash simply means that the light output from the flash is not as bright as the ambient light on the subject, the flash is not defining the exposure.  There’s no specific “fill flash” setting on a flash, you simply dial down the flash compensation if you are shooting in ETTL.  Now you are using your flash just to fill in the shadows a little bit, and with animals this not only adds a catch light to the eyes, but can also reveal more textures and details in their feathers or fur.

The key to successful fill flash with animals is subtlety!  Each animal and scene requires a little experimentation, but in general you will probably be in the area of -1 to -2 stops of flash on the flash compensation dial.

For the most part, I think I can just let the image comparison do the talking. Pay particular attention to the catchlight in the bird’s eye.  It really bring the bird to life!  It also adds a lot more texture to the feathers and opening up some of those shadows gives you more latitude to play with in post processing.  Now of course, the effect of the flash on the features or fur of the animal will vary greatly depending on their colour, but the catchlight will always be added and that is often reason enough to use a flash on an overcast day like this.

A Note On Better Beamers and MagMod MagBeams

If any of you are already familiar with the use of flash and long lenses, you might be wondering where my flash extender is!  For those that don’t know, a flash extender is an accessory that extends the range of your flash by focussing the light beam at a further distance by using a fresnel lens.

Effectiveness varies depending on your focal length and also the zoom setting of your flash head, but they can add 2-3 stops of flash power.  I do have one but when I took this BTS photo I didn’t need it as the birds were so close to the camera that I had no issue lighting them up.

There are really only two options to choose from when it comes to picking a flash extender. The Better Beamer is perhaps the best-known option since it has been around for many years, but I actually prefer the MagMod MagBeam as it is a little more effective and also has a much more robust design. I’ve talked about both of these before, so here is my Better Beamer review, and here is my MagMod MagBeam review.