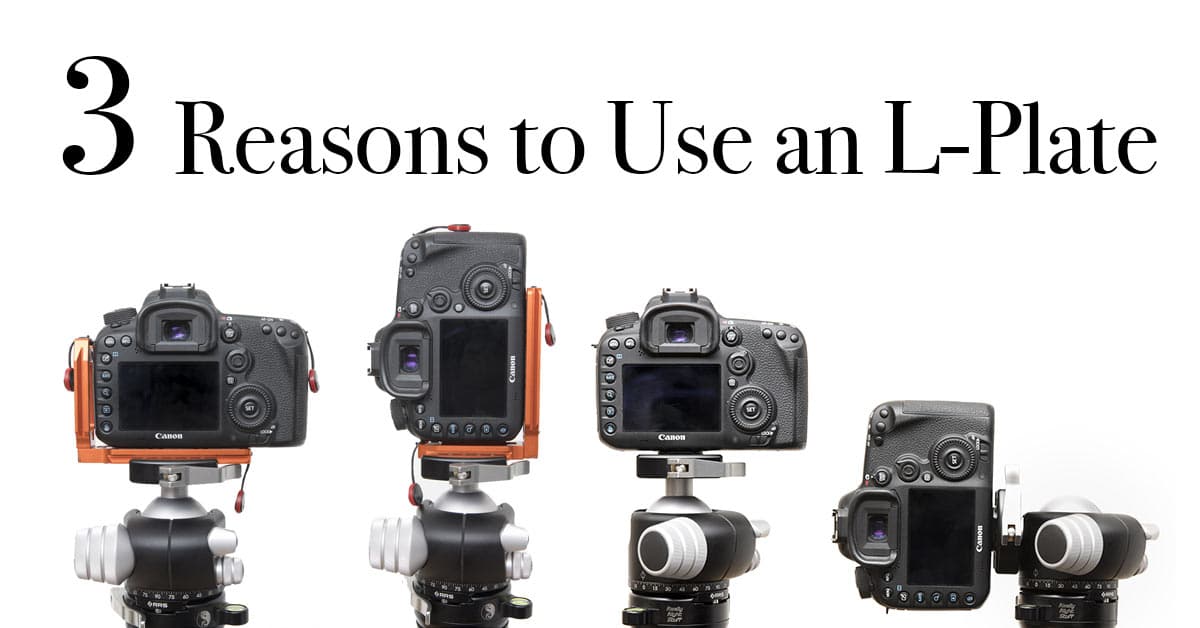 An L-plate (sometimes called an L-bracket) is an accessory that stays permanently attached to your camera and allows you to clamp it to the ballhead on your tripod. When I purchased my first L-plate about a decade ago, it was one of those “why the heck didn’t I do this before!!” moments, and since then I’ve had one on every camera I own. When people see me using it, or when I post photos of my camera setup on social media, I often get questions from people asking about “the funny bracket thing”. If you want to delve really deep into the topic of camera L-plates, I’ve previously written one of my long-form articles about them called: The Ultimate Guide to Camera L-plates.

If you want the distilled “Cliff Notes” version, that’s what I’m writing about today. Here’s my top 3 reasons that you should be using an L-plate on your camera. 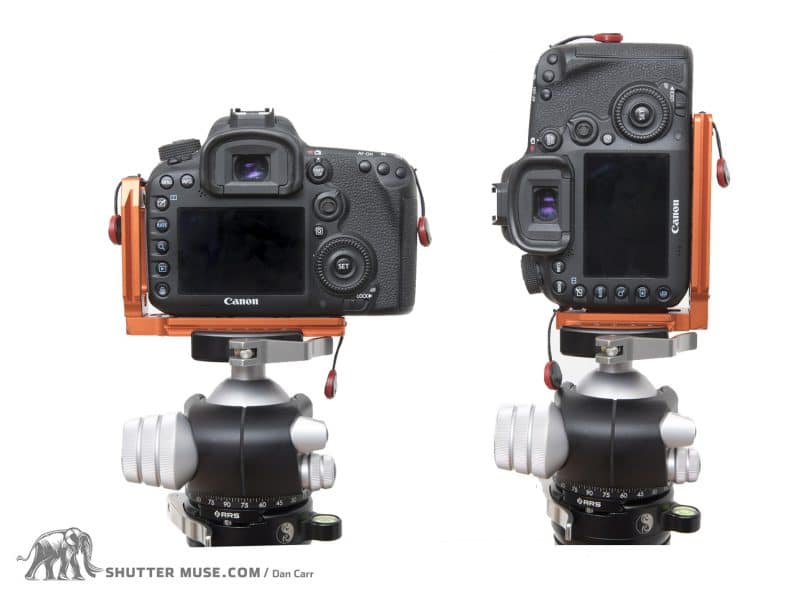 Camera orientations when using a camera with an L-plate 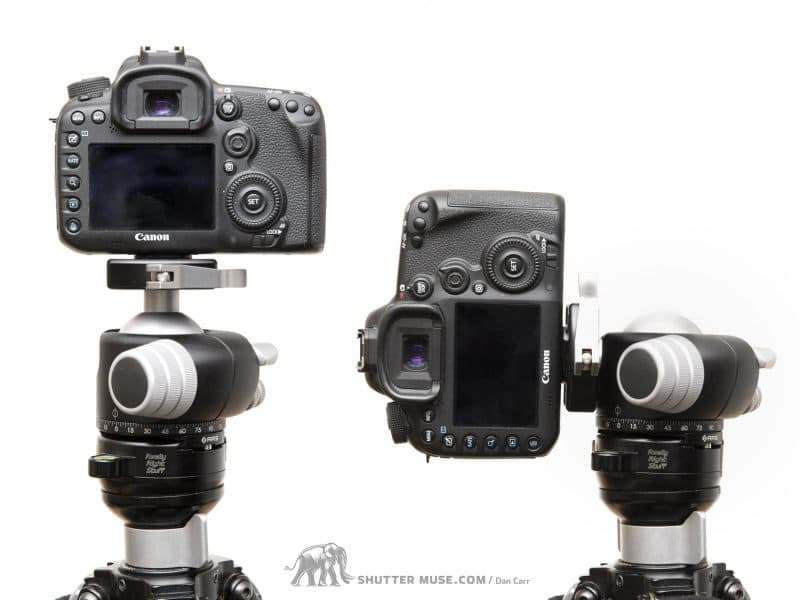 Camera orientations when not using a camera with an L-plate

1. They Speed Up The Shooting Process

L-plates use the Arca-Swiss standard quick-release system, which makes it incredibly fast to attach your camera to the ballhead on your tripod. When the light is just right, it’s common to want to want to try getting some different compositions in both portrait and landscape orientation. With an L-plate on the camera you can swap orientations very quickly and only have to make minor adjustments to your ballhead because you have effectively just rotated the camera close to the lens’ axis.

Without an L-plate you have to use the drop notch on the ballhead to get into portrait orientation. You can see in the photo how the camera position is dramatically changed! Not only have you moved it to one side, but you’ve also lowered it, requiring much more fine tuning of your composition. Now your camera is also at a lower working height than it was before, so all that initial set up to get the camera at the perfect, comfortable working height has been wasted. Just thinking about it annoys me!

It’s common for landscape photographers to travel great distances and spend huge amounts of time waiting for the right light. When mother nature turns that light on, any speed advantage you can give yourself to get a variety of shots is worth it.

2. They Can Give You Sharper Images

If you’re not using an L-plate then it means you’re either using a smaller tripod plate, or you are simply spinning the camera onto a ballhead using the 1/4 20″ thread on its base. Those other two options give you a much smaller contact point on the camera, and increase the risk of the camera rotating on the tripod plate. It’s annoying enough to have to constantly retighten things, but it can also lead to softer images as the camera moves a fractional amount during longer exposures. This is particularly a problem when you have flipped the camera into the ballhead drop notch to take a photo in portrait orientation. When using the camera in that way, it’s common for the weight of the lens to cause the camera to sag slightly on a regular tripod plate leading to a soft image. A camera in the ballhead drop notch is also much more susceptible to ballhead sag, again lowering the sharpness of your images. 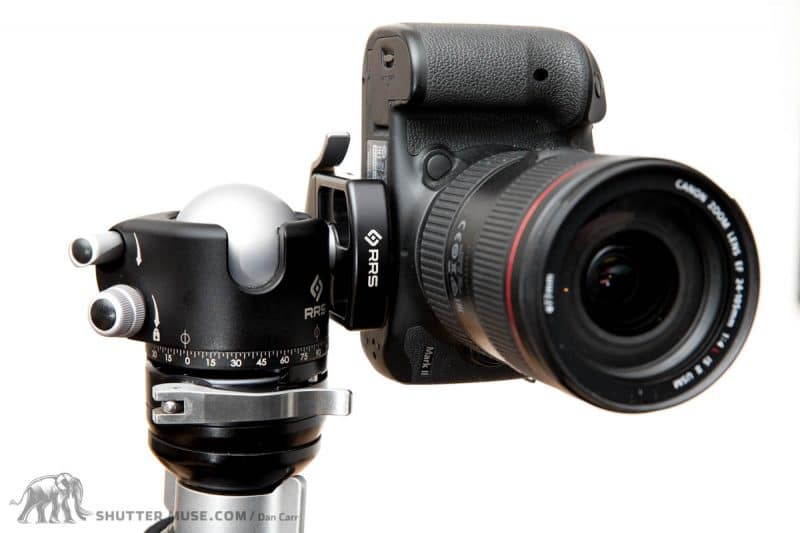 Without an L-plate, the off centre camera in a drop notch can destabilize a tripod, and the lens weight can cause the whole setup to sag.

With an L-plate you have a much larger contact area on the base of the camera which keeps friction higher and prevents rotation on the base plate of the bracket. Camera-specific L-plates, such as those built by Really Right Stuff, actually “hug” the contours of the camera in multiple places, making any movement of the plate completely impossible. The plate almost becomes a part of the camera!

A L-plate also keeps the weight of the camera directly over the top of the tripod in portrait orientation, which greatly increases overall tripod stability on softer ground or in windier conditions which again leads to sharper images.

3. They Protect Your Camera

The L-plates wraps around the camera body and acts like a protective shell. It’s particularly useful for preventing dings and scratches on the base of the camera, allowing you to put the camera down on the ground without fear of damaging or devaluing it. if you ever decide to sell your camera, it’ll be in that much better condition that you’ll be able to ask a higher price for it and effectively get back the money you spend on the L-plate.

Which One Should You Buy?

Convinced yet? I hope so! The good news is that in the last few years there have been many more L-plate additions to the market, and now they can be had for a very reasonable price. There are a lot options, and these are explained in a bit more detail in that longer guide that I mentioned earlier, but the short version is that these are my recommendations in different price brackets: