Home » Tutorials » Angle of View Vs. Field of View. Is There a Difference and Does it Even Matter?

Angle of View Vs. Field of View. Is There a Difference and Does it Even Matter?

Whilst researching some new tutorial content for this site, I stumbled upon a topic which seems to have a lot of people confused, and I have to be honest that when I began delving deeper into it, initially I just became more and more confused myself.

The seemingly simple question is: Is there a difference between angle of view (AOV) and field of view (FOV)?

I realized that in the past I had used the two terms somewhat interchangeably, but I began to wonder if that was incorrect even though I found many other people doing the same thing, such as Bob Atkins, who refers to FOV when defining the equation for it, but labels the resulting graph with AOV.

The Wikipedia entry for field of view starts with the first line “For the same phenomenon in photography, see Angle of view”  which certainly seems to indicate that the two are interchangeable. Unfortunately it quickly contradicts itself in the very first line of the angle of view entry by citing a source that clearly states that people should not treat FOV and AOV the same. That source, linked in the previous sentence, states that AOV is an angle, whilst FOV should be a measurement of linear distance.

That actually made a lot of sense to me, but other sources I trust explicitly on such matters, such as the excellent Photography Life website, contradict that statement by saying that whilst AOV and FOV are different things, they are both measured as angles. In their article it states that AOV is a property of the lens and does not change no matter what size of sensor is in the camera, whilst FOV is a function of the lens AND the sensor size. In other words, a full frame lens can have a particular AOV, but when used on a crop sensor camera the actual field of view (FOV) is going to be smaller. Once again, taken in a vacuum, this sounds like a perfectly excellent way to define both terms, but it does contradict other sources and I struggled to find anywhere else that suggested that particular pair of definitions.

I then started to look around to see how camera manufacturers were using the terminology and found that Canon, Nikon and Sony all cite angle of view in their lens specifications on their websites and appear to prefer this terminology over field of view. However, they also include the angle of view for both full frame lenses, and APS-C lenses (see example below), which is contrary to the usually excellently researched content on Photography Life which says that AOV for a lens is constant, and only FOV changes based on sensor size.

Sample specification from Sony website. Canon and Nikon take much the same approach.

“Angle of view” describes how much of the scene in front of the camera will be captured by the camera’s sensor. In slightly more technical terms, it is the angular extent of the scene captured on the sensor, measured diagonally. It is important to remember that angle of view is entirely determined by both the focal length of the lens and the format of the camera’s sensor, so the angle of view you get from any given lens will be different on 35mm full-frame and APS-C format cameras. Different lenses of equal focal length will always have the same angle of view when used with the same-size sensor

Nikon agrees with Sony here, although they do then go completely rogue and start talking about “picture angle” in a section labelled “angle of view” which is a term never mentioned anywhere else by anyone else, and, in my opinion is probably just the result of a poor translation at some point.

So What the Heck is AFOV?

At this point I was thoroughly puzzled by all of this and all signs were pointing to the fact that the two terms are just so similar to each other that the internet has completely befuddled itself about them. Then I started to notice a third term popping up in some content, such as this article by Edmund Optics which was referring to AFOV, as in angular field of view.

Ok, so now we have FOV, AOV and AFOV!

That particular article used the term AFOV in place of what I was coming to define as AOV. I can accept that, because when you think about the term field of view it doesn’t seem as though it should be an angle, so the addition of the word angular makes sense there if you are going to use an angle as the unit of measurement. In some cases I also found people referring to the term “linear field of view” which I think we can all agree is just a way of underlining that this is a distance rather than an angle.

Here’s How I am Going to Define FOV and AOV! 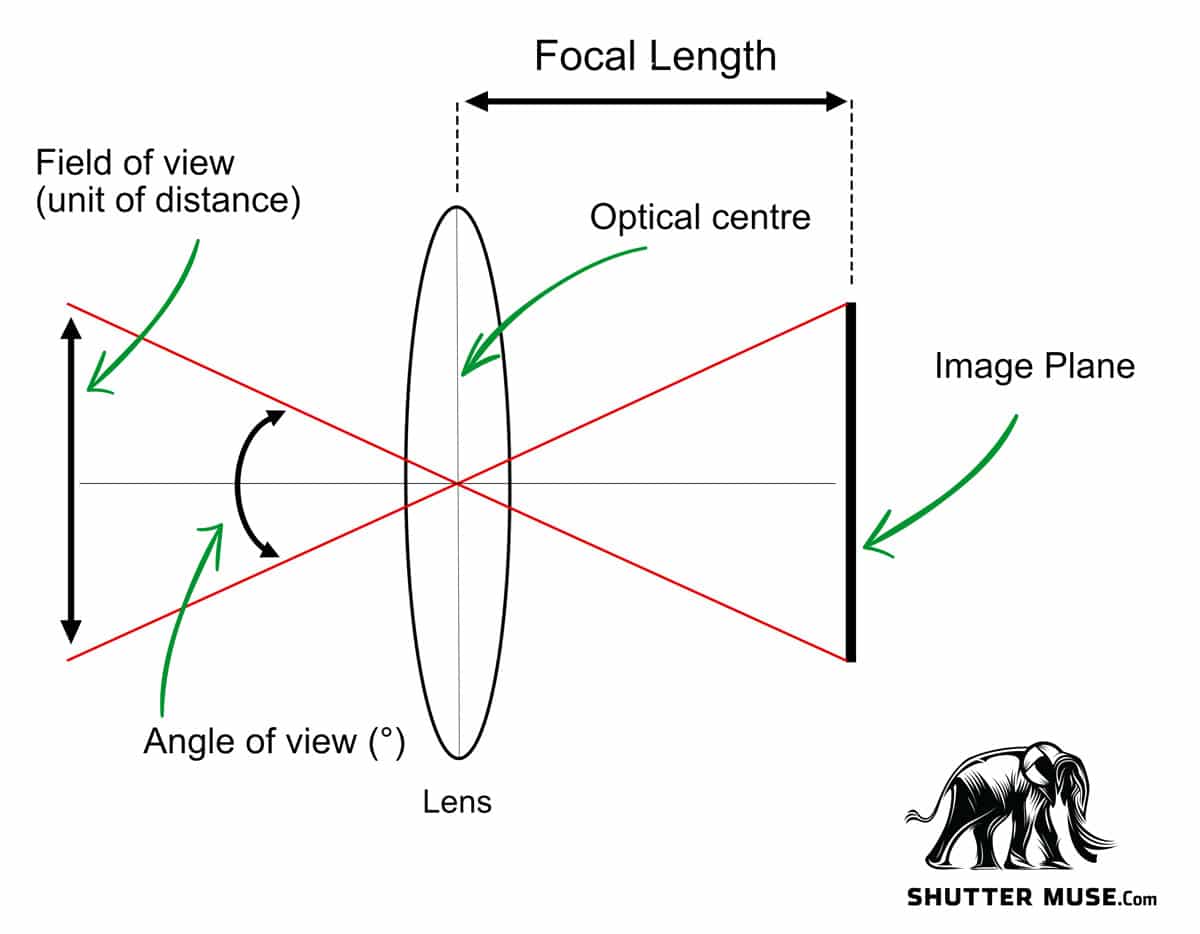 I have a feeling that there’s just that much confused information out there on this topic that people will discuss (and argue about) it forever, but I wasn’t willing to sit back until I had come up with a set of definitions that I was happy to adopt for use on this site and in my teachings going forwards. Feel free to disagree with me in the comments, I’m absolutely open to other suggestions if they can be backed up with some source of information. Having read countless arguments and blog posts on the topic though (seriously, I spent 8 hours reading about this today), I’m happy with how I have concluded to tackle these terms in the future. My definitions, as presented below, are the ones that make the most sense to me when I piece everything together.

So here is how I am going to define and use these terms on this site and in my future work unless someone can provide me with some well sourced information that contradicts this:

Defined by the equation:

This is the formula that is most commonly cited for angle of view, and it agrees with the way in which lens specifications are presented by all the major camera manufacturers.

Defined by the equation:

Field of view is a measurement of distance and it requires the knowledge of the distance from the lens’ optical centre to the subject. If you know the focal length, and the distance to subject, you can calculate the angle of view and then the field of view. This would allow you to calculate the size of something within your frame, or, in reverse you could calculate your distance to the subject if you knew the size of it and what proportion of your frame it filled.

One thing I discovered that backs up my theory that this is the best definition for field of view is that this is exactly how all binocular manufacturers use this terminology in binocular specifications. That industry uses the standardized distance of 1000yds as the distance to subject, and binoculars will often list a specification such as “Field of view: 300ft at 1000yds”. Source: allaboutbirds.org

An example specification taken from the Nikon Sport Optics website for the Monarch HG binocular. Note their usage of Angular filed of view as an angle, and importantly, field of view as a distance!

Exactly the same thing as angle of view.

The same thing as FOV, measured with a unit of distance and requiring the knowledge of the distance from the lens to the subject matter. Most often used when also using the term AFOV. eg “The Canon 35mm lens has an angular field of view of 54.4 degrees and a linear field of view of 103ft at 1000yds”.

What do you think about this set of definitions?

Leave a comment below, but if you want to disagree with me then it would be wonderful if you could cite some sources because there are already far too many forum threads out there on this topic which have simply degraded into back-and-forth conversations taking the form of “I’m right” , “No, I’m right”. Let’s not have this become another one of those! I want to get to the bottom of this!