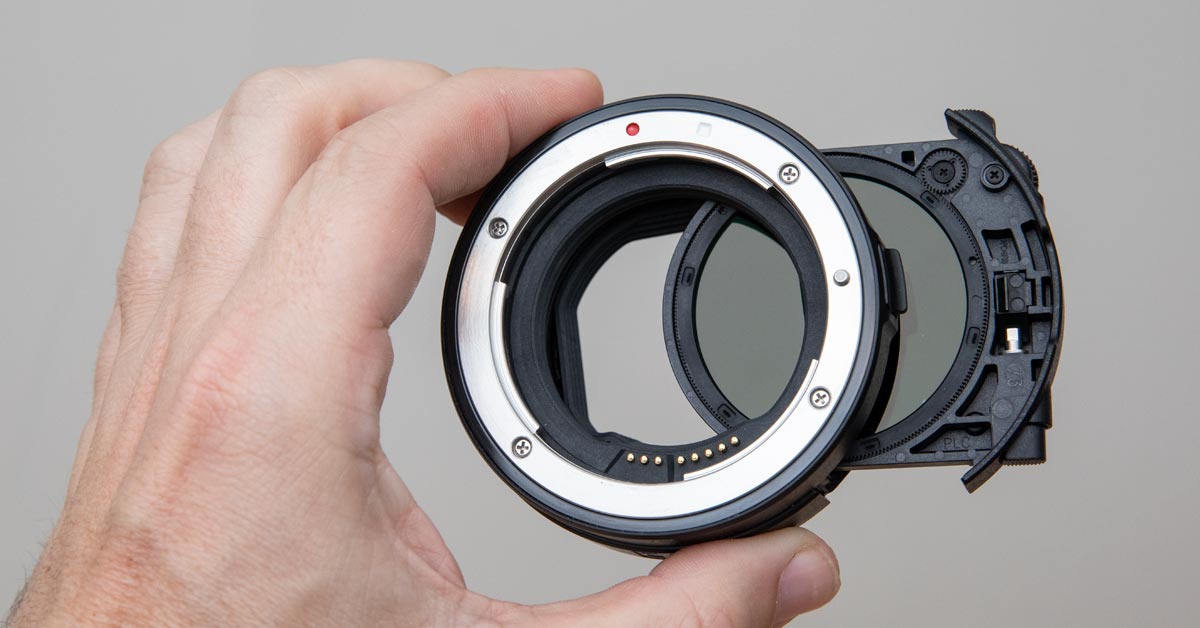 With the launch of Canon EOS R full-frame mirrorless system came a selection of mount adapters that allow older EF and EF-S lenses to be used with the mirrorless EOS R cameras. Aside from the basic adapters that are the norm in the industry, Canon also created a few additional adapters that add some useful features.

In this review I’ll be taking a look at the EF-EOS R mount adapter that incorporates a drop-in circular polarizing filter. At the time of writing, this is a unique product and Canon have done well to innovate in this area and help photographers make the inevitable transition to the mirrorless system. Note: There’s also an adapter that incorporates a drop-in variable neutral density filter.

Why use a polarizing filter, and why is this particular design so useful?

Polarizing filters are most useful to landscape photographers as they can dramatically cut down on reflected light that otherwise dulls the colours in scenes with foliage, water and sky. I have included one example of the difference that can be made when using such a filter, but if you want to see some more then I’ll refer you to a previous post on this site where I shown all the reasons why you might want to use a polarizing filter.

What’s really cool about the design of this mount adapter is that the polarizer is mounted behind the lens and this gives two massive benefits:

Firstly, you only need one of them and you can use it on every EF lens that you have. Normally you would use a screw-in polarizing filter on the front of the lens, but this means that you either have to buy multiple filters to match the various filter thread sizes you might have on your different lenses, or you have to use the cumbersome filter thread adapters which can be extremely fiddly in the field. With the polarizing filter inside the mount adapter, you just need this one single filter!

The second reason that this design is so useful is that you can use a polarizing filter with ultra-wide lenses that don’t have a filter thread. Lenses like the Canon 11-24mm f/4 L, or the Sigma 14mm f/1.8 ART have huge bulbous front elements that prevent the usage of standard screw-in polarizing filters. Since those wide lenses are often used for landscape images – the exact kind of image that often benefits most from these filters – it has always been a downer that you can’t easily use a polarizer. Now, with this mount adapter, the problem is solved!

The mount adapter is solidly built, and weather sealed against dust and moisture in the same was that their higher end cameras and all L Series lenses are. The rotation of the polarizing filter is controlled by a small wheel on the side of the adapter, and the filter can be removed by pinching the buttons and sliding it out.

If you do not wish to use the polarizing filter, but still need to use the adapter, you can buy a glass drop-in filter that takes the place of the polarizer. It’s called Canon Drop-In Clear Filter A and it cost $129. I find the price of the clear filter to be pretty steep, and I’m guessing that most people will prefer to buy the regular mount adapter for $99 instead! You’ll have to swap mount adapters instead of just drop-in filters, but you’ll save $30.

The only real reasons to buy the clear filter instead of the standard mount adapter is for the small weight saving, and the option to switch filters without having to remove the lens and adapter in a dusty environment, which might expose the sensor to dirt.

Overall, in terms of build and features I think Canon have done a good job with this adapter and it certainly feels up to the rigours of prolonged professional use. The $239 price for the adapter also seems fair when compared to the price of a really good polarizing filter in a 77mm or 82mm thread size. My only real price gripe is the steep price for the optional clear filter.

Whenever you place a polarizing filter on a lens, be it at the front or in the back as it is with this adapter, there will be some light loss. Cheaper polarizing filters can reduce the light coming into the camera by as mush as two stops, but higher quality ones tend to cut a little less light than that.

Having repeated this process a few times to check my working, I’m confident in saying that the filter density of the EF-EOS R drop-in polarizing filter adapter is 1 1/3 stops. This is a good result, and is one indicator that a good quality polarizing filter is being used.

So, using the polarizing filter adapter will require 1 1/3 more stops of light than using the standard EF-EOS R adapter, but you’ll get all those wonderful benefits of a polarizing filter if you happen to need them for the scene you are photographing.

It’s often the case that lower quality filter will create a colour cast in an image. Sometimes it’s merely a subtle warming or cooling that can be corrected with a white balance adjustment to the RAW file, and sometimes it’s much worse, requiring painstaking editing.

To test the Canon EF-EOS R drop-in filter with circular polarizer in this regard, I simply took a photo using the polarizer, and then switched the mount adapter to the standard one with no filter and took the same shot again. I have included those test shots below.

In Lightroom I set the RAW colour temperature the same value on both images, therefore any resulting colour shift between the two images would be caused by the polarizer.

As far as I can tell, this drop-in polarizing filter is colour neutral, or at least very very close to it, which is an excellent result. Obviously the image with the polarizer does show slightly more saturated colours due to the polarization effect of the filter, but there are certainly no nasty green or red hues which would hard to get rid of.

Using the same pair of test images above, I was able to examine the sharpness of the image with and without the drop-in polarizing filter. There was no noticeable change in sharpness with the filter in place.

I love that Canon has brought a few adapter options to the table with the new EOS R system. The drop-in circular polarizer adapter is a high quality CPL that’s easy to use and built to the standards of Canon professional lenses. If you own an ultra-wide EF lens that otherwise prevents the usage of a screw-on polarizing filter, I think this adapter is an excellent purchase and I’ll be buying one myself for that reason as soon as I have returned this loaner one.

My only real reservation is the cost of the optional clear filter. In an ideal world, switching out the CPL for the clear filter would be the best option when you don’t need the polarizing effect, but Canon haven’t priced the clear filter at a price point that makes the purchase decision a no-brainer. It seems silly to me that it’s actually cheaper to buy a totally different standard EF-EOS R mount adapter instead of the simple clear filter.

That said, many people already own the standard mount adapter as they have been sold with the EOS R camera bodies as a package for some time. I already have one for that reason, so the clear filter is not a necessary purchase for me and I’ll just be buying the drop-in CPL adapter.

As always, it’s greatly appreciated when you use our links to make your purchases. We may make a small commission when you do this and it helps us bring you more content in the future. The adapter can be purchased at: