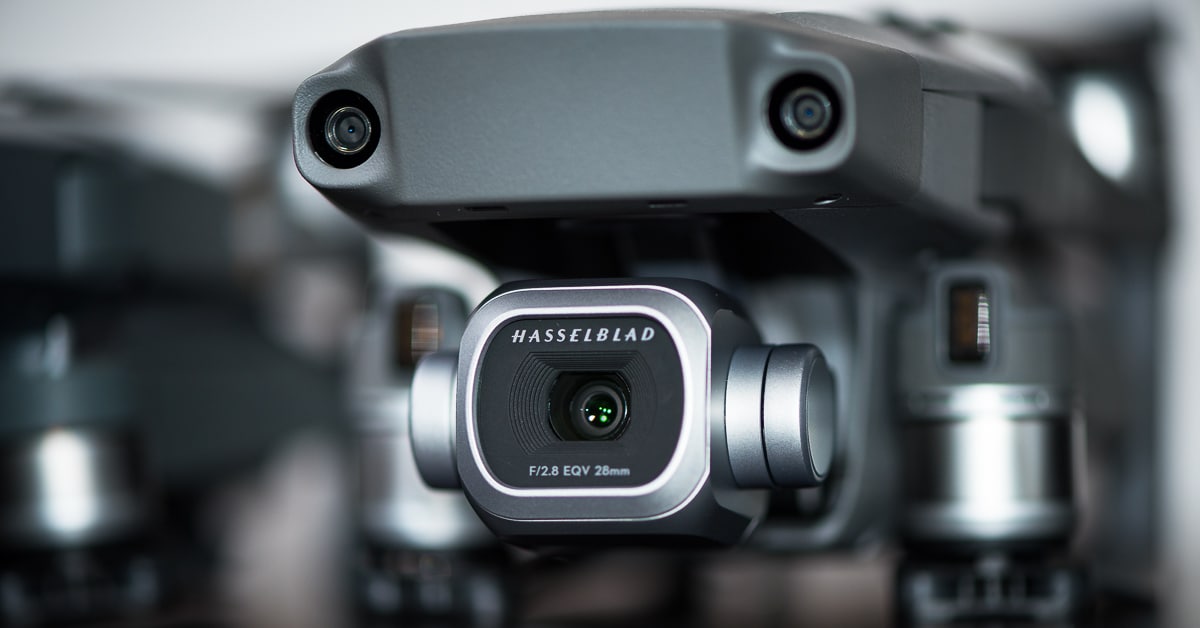 Over the past two years aerial photography has slowly but surely earned a secure spot in my photographic repertoire, thanks to tools like the DJI Mavic 2 Pro and DJI Phantom 4 Pro+. The ability to place a camera in virtually any position or angle in three-dimensional space, rather than being limited by where your can walk or stand on your own, not only opens up unique compositions, but also completely frees the photographer to realize their creative vision.

I ended up with both of these two particular drones largely because I’m indecisive and picking between them presents a bit of a conundrum. On one hand there’s the impressive portability of the Mavic, and on the other hand there’s the very respectable image quality from the Phantom. After months of use, the Phantom was my clear winner, and the Mavic has only seen occasional use. For most of my personal projects and assignments, I’m more than happy to sacrifice some space and convenience in the name of improved resolution and dynamic range that the 1″ sensor on the Phantom provides. 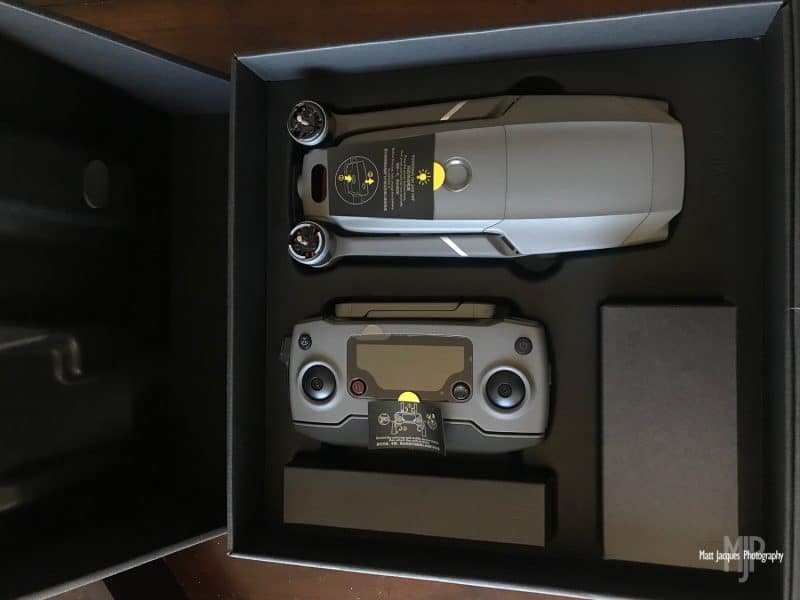 Ooh, fresh new drone. The Mavic 2 Pro has a solid, professional feel to it.

Then suddenly, everything changed… Enter the Mavic 2 Pro.

When DJI announced their latest two drones, the Pro and the Zoom, it was the Pro that caught my attention right away. The Zoom, with its 24-48mm zoom lens, seems like it would make a fun UAV to play with, but the 1/2.3″ sensor size and 12MP resolution are essentially the same as the original first generation Mavic Pro. The Mavic 2 Pro, on the other hand, suddenly has the same 1″ size sensor of the Phantom 4 Pro, and the same 20MP resolution. On the surface at least, it looks like the Mavic 2 Pro has finally achieved the perfect marriage of the Mavic’s small size and the Phantom 4 Pro’s excellent image quality. And what’s all this about a Hasselblad lens? I’m in.


Upon opening the box and taking a first look at the drone, the design and engineering of the Mavic 2 Pro clearly represents much more than just squeezing a larger sensor into the old Mavic body. While the chassis might look almost identical, it’s ever so slightly different in nearly every conceivable way. Side by side with the first generation, the Mavic 2 Pro is slightly bigger, slightly longer and slightly heavier. There are more sensors incorporated into the body – including top, side and reverse sensors – and the brushless motors are slightly bigger and presumably more powerful. Even the finish on the body has a less plastic-y feel to it. This all contributes to an overall feeling of improved quality which hopefully translates into durability. It’s quite the feat to cram this much technology into a folding gadget, so opening and closing the Mavic often feels like handling a $1,499 piece of origami. It’s a fascinating and very cool bit of engineering, but often leaves you feeling like you should somehow be more careful with it – an impression which can get in the way of simply using it as a professional tool to create images.

Mavic 2 Pro (right) is similar, but slightly different in nearly every way compared to the original Mavic Pro (left).

Thankfully when it comes to capturing images, the Mavic 2 Pro has proven solid and reliable. Despite all of the headline-grabbing intelligent flight modes like auto tracking and hyperlapse (more geared toward video), and auto HDR and auto panorama modes for stills, I still tend to shoot in the ‘boring’ single frame full manual mode. The drone’s ability to shoot in RAW is critical to capturing great images, and it seems that most of those automatic modes immediately switch the file format back to jpg since they rely on the drone doing the processing of multiple frames/exposures. That’s great for some applications, but to make the most of the dynamic range of the sensor and get the best final image quality that’s suitable for print, RAW is always the way to go.

The Mavic 2 Pro also introduces the controllable aperture feature from the Phantom 4 Pro. For video shooters, this acts as a built-in neutral density (ND) filter, allowing the shutter speed to be kept in the sweet spot that produces the smoothest-looking video. When it comes to stills, this gives some much appreciated control over optimal image sharpness, and the flexibility to respond to changes in light while keeping a suitable shutter speed to ensure there is no motion blur. Depth of field is essentially a non-issue thanks to a combination of the relatively wide angle lens (28mm equivalent), and the typical working distances involved with taking photos from elevation. 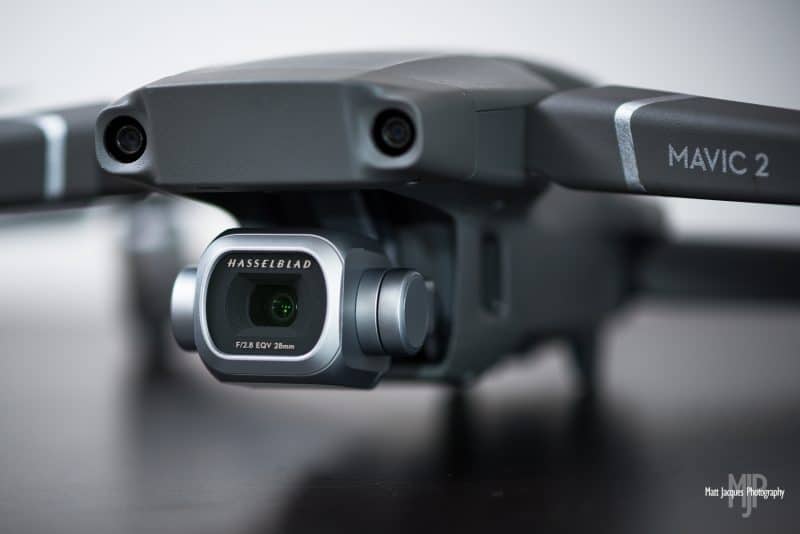 Hasselblad partnership on the Mavic 2 Pro camera seems to be tied more to marketing than any tangible image quality improvements.

On my first trip out with the drone I headed out to find some golden fall foliage to shoot, about an hour outside of Whitehorse, Yukon – and was soon introduced to another simple but awesome feature of the Mavic 2 Pro. After picking a spot to launch from, a flash of panic washed over me as I realized I forgot to insert a memory card before leaving home. Oops, did I just drive all the way out here just to turn back empty handed? Thankfully that panic was short-lived as the option to record to internal memory popped up on the DJI Go app’s screen… phew! 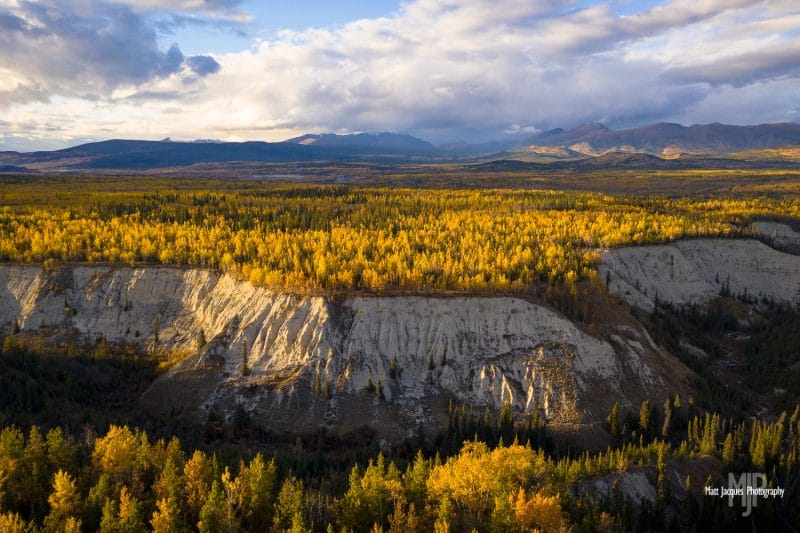 With the files from that shoot back safely on my computer at home, I was able to get a better sense of image quality. My goal here was not to conduct a comprehensive pixel-peeping review, but get an overall sense of the images the drone is capable of producing. So far I’m very pleased and would comfortably describe the image quality as being as good as the Phantom 4 Pro. Shadow and highlight details are much more recoverable here compared to the original Mavic Pro. I think of this as how “stretchy” or elastic an image file is. Ultimately, a stretchy RAW file means it’s much easier to capture and create dynamic landscape images without introducing unwanted side effects like noise or loss of detail. My Nikon DSLR (D810 & D500) files will always be stretchier, but the Mavic 2 Pro’s images are no slouch and perfectly suitable for publication or creating fine art prints. 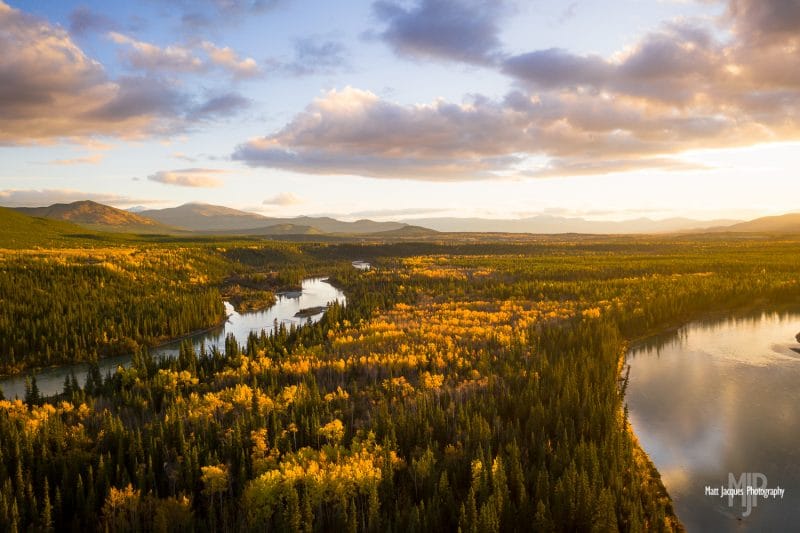 The Takhini River winds through the Ibex Valley during golden hour. The Mavic 2 Pro did a great job balancing highlights and shadow detail in challenging lighting conditions here.

While the marketing materials for the Mavic 2 Pro lean heavily on the collaboration with Hasselblad, it’s unclear to me what exact benefit this brings. Even though the camera is labeled (quite literally and prominently) as a Hasselblad camera, the 1″ sensor itself seems to be Sony-made and the only contribution from the company seems to be the “Hasselblad Natural Colour Solution” or HNCS. If I’m deciphering the marketing-speak correctly, it’s very likely that HNCS is only invoked during jpg production, including some of the new high dynamic range modes. Neat, but nothing to get excited about as a RAW shooter.


So once the dust has settled and the marketing hype has faded away, we’re still left with a great camera that you can position and re-position almost anywhere you’d like. If the Mavic 2 Pro had existed two years ago, I wouldn’t have had a dilemma at all. This new drone really does everything the Phantom 4 Pro does and then some (e.g. 10 bit video, additional sensors etc.), all stuffed into the body of the Mavic.

It’s not perfect, but it sure is an awesome little platform from which to create images! 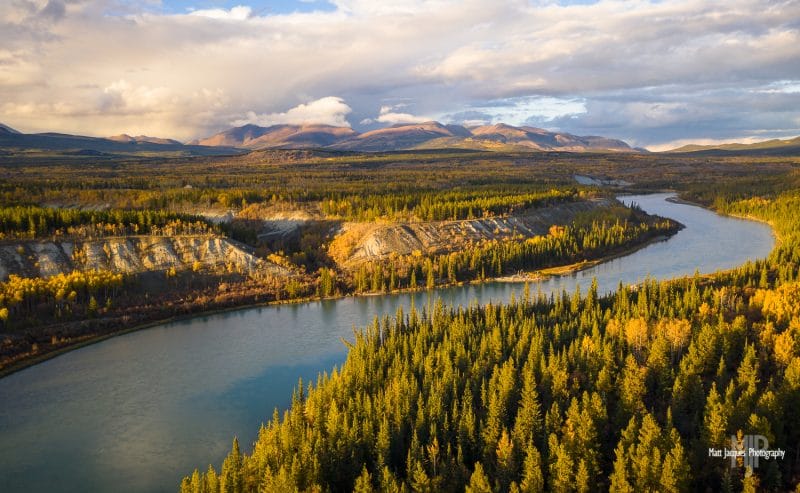 The Takhini River winds through the Ibex Valley just outside Whitehorse, Yukon.