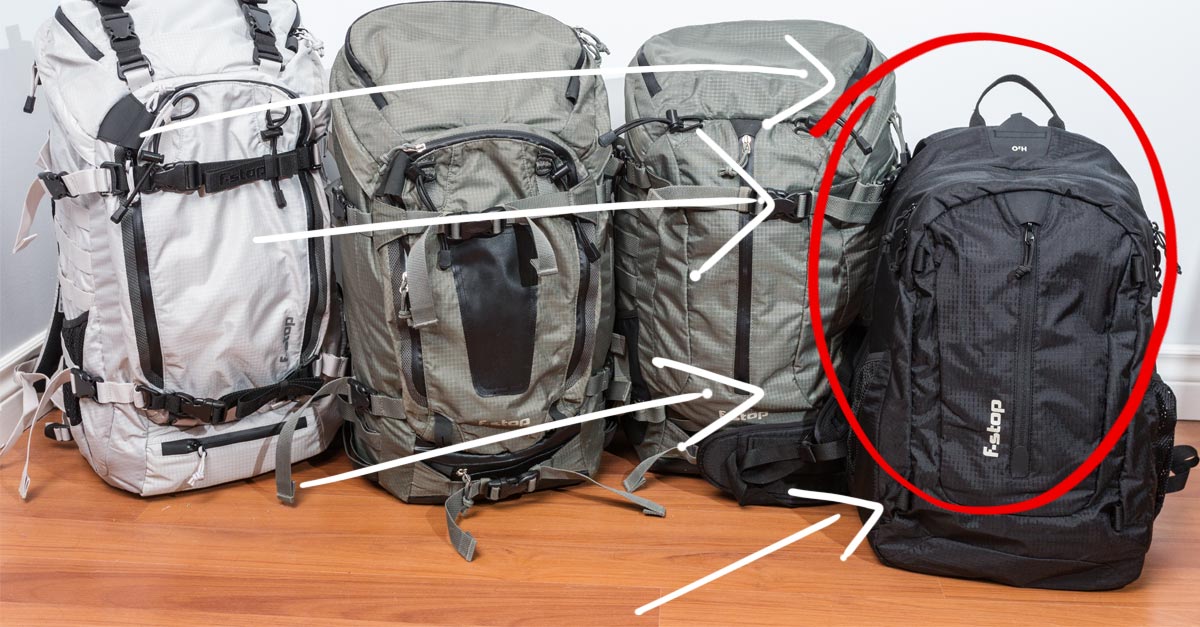 f-stop have added a new pack to the Mountain Series lineup, called the Guru. In this review I’m going to run through all the features of the bag and show you a ton of photos of it, and how I pack it.

Disclosure: At the time of writing this review, I was a member of f-stop’s Faction Pro Team. While this is no longer the case, I have not edited opinions in the review since its initial publication in 2011.

As you would expect, the Guru is designed and manufactured to the high standards we have come to expect from the other packs in the Mountain Series lineup. The main difference here is that the Guru is currently the smallest pack of the series with a 28L capacity. This compares to the 37L of the Loka and the 48L of the Tilopa BC.

The f-stop ICUs (Internal Camera Units) have always been a key component of the Mountain Series packs. The Guru is designed to work well with either the small or medium Pro ICUs for people with a minimal amount of camera gear, who want to carry a few extra items with them such as food or clothing.

The medium slope ICU is also a good fit. Of course any ICU smaller than the Small Pro will also fit, but the bag depth would mean it moves around a lot internally. The depth of this bag has been designed with the depth of the Pro ICUs in mind.

As you will see in the additional images within this review, using either of these ICUs leaves a considerable amount of additional room in the top of the pack

In addition to a 15″ laptop pocket, the Guru also features a comprehensive organizing pocket in the front with multiple internal zippered pockets and slots for accessories. Due to this organization, its small size and inconspicuous looks, the Guru can be used in many different ways. It makes a great pack for a day in the city, a roomy bag for use at school, or an all day mountain bike adventure.

The Guru is built from the same ripstop nylon as the Loka and Tilopa backpacks. Let me tell you, it’s tough stuff! This is going to last you a long time.

Now please take a scroll through the 50 photos below which detail every part of the new Guru.

The versatility of the F-Stop packs has always been a key feature.  You can choose how much camera gear you want to carry in your pack by picking the size of the ICU when you place your order.  Perhaps you want just a camera and a lens to take on a weekend trek, or maybe you want to carry a 10-lens arsenal for a huge one day shoot.  Both are possible with the right selection of ICUs. F-Stop were the pioneers of this form of outdoor photography back.

With the Guru, f-stop have introduced a new feature called the Gatekeepers. Durable nylon straps with quick-release buckles. The Guru comes with a pair, and more can be ordered as needed. The spring loaded clips allow easy release of the straps to re-position them to one of several different mounting points on the pack. If you would rather carry extra load on the side, no problem, simply move the Gatekeepers.  Or if you want to keep the pack looking sleek, remove them altogether. The choice is now yours. This new feature will also be included on all future Mountain Series packs.

Guru as a strobe kit bag

I was asked this question a few times so here is the pictorial answer. Is the Guru a good pack for carrying a strobe pack and head, in particular an Elinchrom Ranger or large Profoto pack. The answer is yes.

The F-Stop Guru is a rugged and highly versatile bag that is a welcome addition to the Mountain Series. In particular, I like the way it straddles the line between mountain pack and capable urban daily carry pack. My other Mountain Series packs would be too large, and rather conspicuous on a day in the city. But the Guru handles these sorts of duties with aplomb.