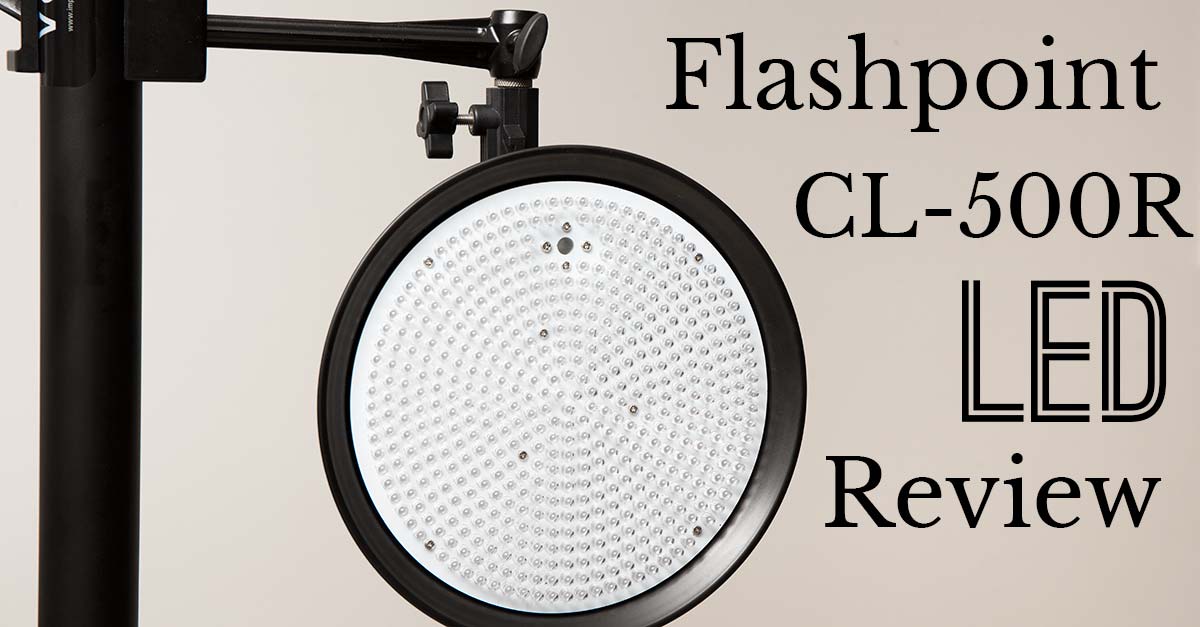 Flashpoint is Adorama’s in-house lighting brand and as well as flash photography equipment like the batter pack we recently reviewed, they also offer a collection of continuous LED lights for use when shooting video.  I recently has the opportunity to test out a few of their LED products including the CL-500R which is reviewed here, and also the CL-1300 which has a separate review, and a slightly higher price point.

LED lighting has seen a sharp price drop in recent months and this has lead to higher quality products in the lower price brackets.  Having previously checked out the Flashpoint 500C, and found it to be pretty awful, I was really pleased to see that this new light is an absolutely giant step forwards in terms of build quality.

To form factor of the light is rather odd though because the power unit sticks off the back of the panel quite some distance, and is not removable in any way.  It comes with a round padded carrying case that is necessarily quite big to accommodate this rear protrusion, but most of the interior volume of the case ends up being empty.  It’s a real waste of space if you are trying to store your gear in a cupboard or pack it into a car.  The more typical rectangular or square LED panels take up considerably less room so this is definitely a negative point for me.

Functionally, the light works well.  It might be a touch cool in temperature, but nothing that troubled me for web video production.  It ships with a diffusion panel that you can stretch over the front of the light, but it should be noted that for an LED light, this CL-500R seems to run pretty hot at full power.  I’m not totally sure I’d want to leave the diffusion cover on the light for very long, and given the relatively lower power of the light, you probably don’t much want to diffuse it and take the power down further.

An optional remote dimmer knob is available for $30

The CL-500R is a light that offers good value, and a marked improvement over the 500C line that I’ve tried in the pas as well.  The problem I have with it at the moment is that the $200 price point is pretty close to the $280 price of the CL-1300 which I think is a much better product in many ways.  The CL-1300 is a standard 1×1 form-factor which is much better for travel, mounting and storage.  It’s hugely more powerful, offers the ability to remote control multiple lights, add barn doors and comes with a 3200k filter for indoor shooting.  For a mere $80 difference, I think you’d be mad to get the CL-500R.

What if the price changes?  It’s hard to say how the price will change with these in-house brands.  The ‘discounts’ are often perpetual, so we may never see the CL-1300 rise to its $450 street price again.  If it did, it would definitely make a difference to my conclusion because we’d suddenly be talking about a light that’s more than twice the price of the CL-500R.

This LED isn’t all that powerful so you’re really limited to indoor use with it.  I used it as a background fill light several times, but you could use it for key and rim lights as long as you were in a room where you had control over the light levels.  Of course this raises the question, why have a daylight balanced light if its not useable outside? It’s definitely a consideration, but you could easily apply a tungsten filter using 1×1 sheets clipped over the light.  Not ideal, but doable with an LED since they don’t get very hot.  If you had two or three of them and didn’t need to use tungsten lights in your indoor scene at all then of course you could just shoot at 5600k.

I still can’t help thinking that this would have been a much better product if the same guts and number of LEDs had simply been arranged into a small rectangular package instead of the awkward bulky, round design.  A good product, not a great one, but if you’d told me two years ago you’d be able to get LED lighting of this quality for $200 I’d have though you were mad!

Since Flashpoint is Adorama’s in-house brand, the Flashopint CL-500R is only available from their store here for $200.  If you are interested in an LED of this physical form factor, you might also check out the slightly more powerful, larger version called the Flashpoint CL-1144R for $400.