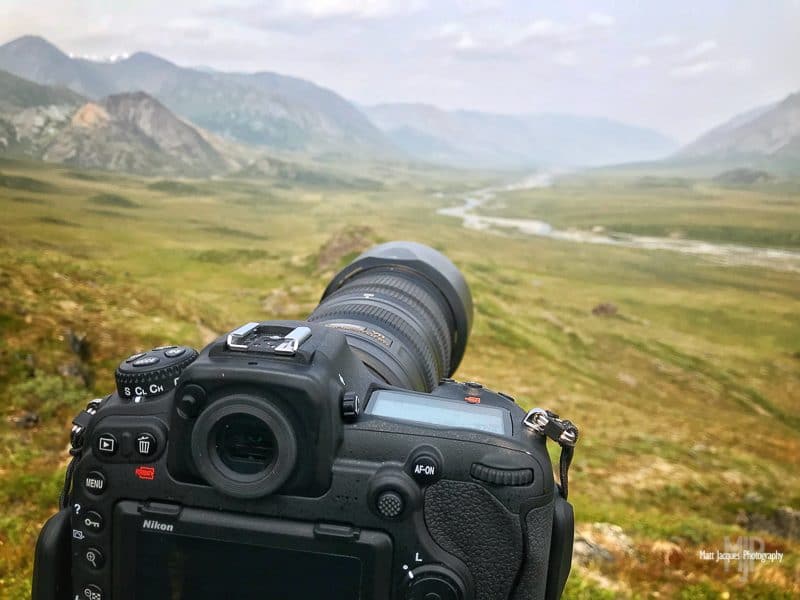 Back in 2016, when considering an upgrade to my trusty Nikon D700, I pondered the options available to me and quickly realized there was no true successor to that camera which served me so well on a wide range of assignments. I was torn between the amazing full-frame resolution and dynamic range of the D810 and the crop-sensor speed demon D500.

Ultimately, I went with the D810 as I had started shooting more landscapes and still subjects, and felt uneasy about taking a step ‘backward’ to a DX body. I’ve had zero regrets about the spectacular D810, but as a big trip into Alaska’s Arctic National Wildlife Refuge this summer began to take shape, I had another opportunity to test out and re-consider the Nikon D500. 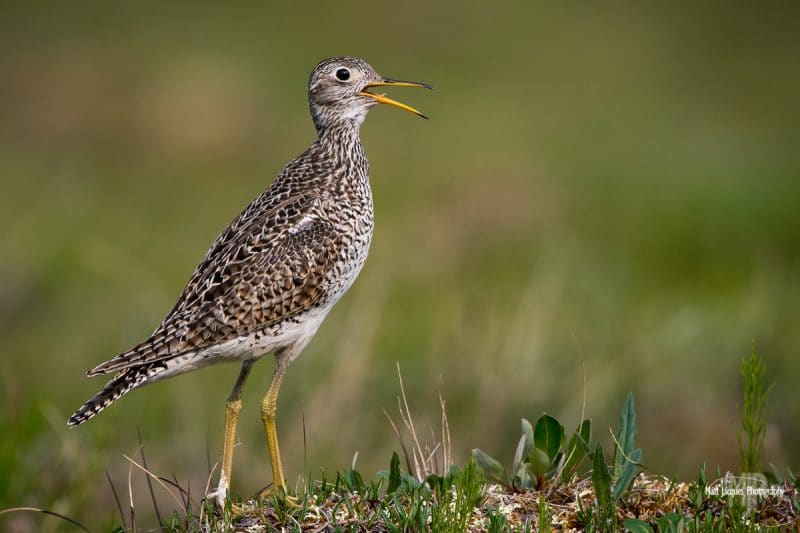 Since its release, the camera has received high praise from reviewers, and it was supposed to pair nicely with Nikon’s AF-S Nikkor 200-500mm f/5.6E ED VR, a lens that had already earned a place in my pack for the trip because of its light weight and reach. Since I would need to take a second body with me on the trip either way, this seemed like a prime opportunity to see what all the hype was about and get a taste of the Nikon’s current DX world.

Logically, the D500 made plenty of sense to keep my long lens bolted to, but did I really need 10fps versus the 7fps possible with the grip in the D810? Would I miss the high resolution and virtually limitless ability to crop in post?

I made sure to familiarize myself with the D500 on a few test shoots before the big trip, and was impressed rather quickly. The somewhat smaller body and lighter weight of the camera only amplified the perks of shooting with the nimble 200-500mm. That lens was already hand-holdable on my D810, but it induced significantly less fatigue when paired with the D500. I noticed and enjoyed the little things that don’t improve image quality, but add to the overall experience with a camera – like the flip-out screen, touch-enabled menus (although, somewhat frustratingly, not *all* menus), and bluetooth/wifi connectivity via SnapBridge. 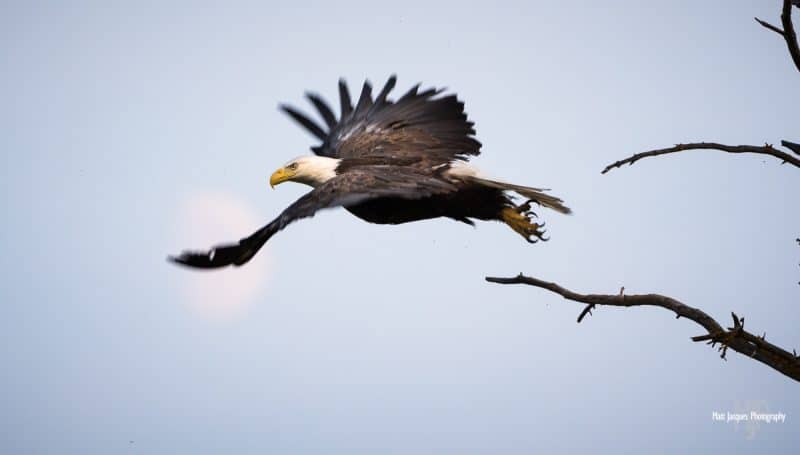 When it came to shooting, the D500 and 200-500mm combo acquired and maintained focus on wildlife subjects big and small very well in most continuous autofocus modes – although I had few opportunities to really assess the 3D tracking. One immediate advantage over my D810 was the dramatically better distribution of the autofocus points across the frame. Since the 153 focus-point AF system is identical to that which is in the D5, but the sensor is that much smaller than the D5’s, the AF points cover a much larger proportion of the frame. This made it much easier to place the wildlife where I’d like them in the frame, and hold focus rather than focusing and recomposing over and over. How many shots have I missed while distracted by recomposing an image in the past? Probably quite a few! 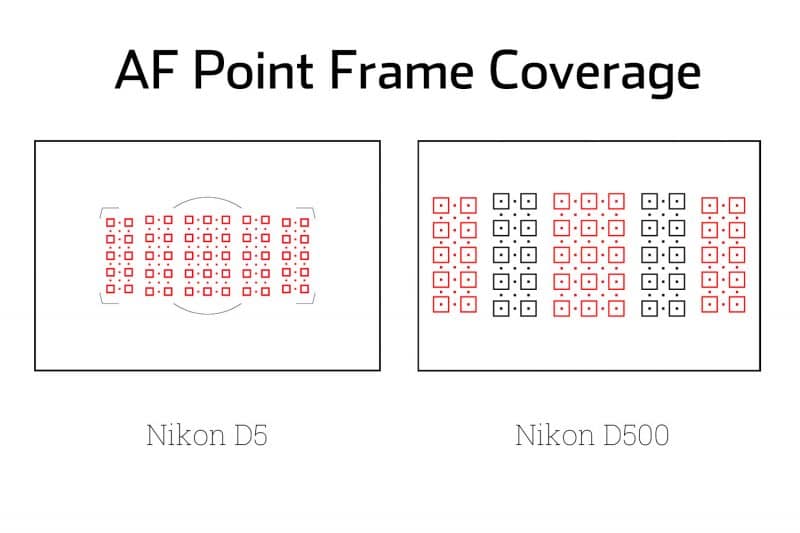 Same AF system, but the smaller sensor of the D500 makes the coverage of the frame much better. All 153 focus points are compatible with aperture f/5.6 or faster, making it great for the 200-500mm f/5.6 lens.

On my D810, I’ve had some issues with using teleconverters with this particular lens, but the TC-14E III 1.4x teleconverter worked well in most cases. The ability to slap a teleconverter on this camera/lens combination makes for some truly otherworldly reach. I found myself doing some quick math in the field when chatting with other photographers. Shooting with the D500 and its built-in 1.5x crop factor turns the 200-500mm into a field-of-view-equivalent 300-750mm. The TC-14E III ramps that up all the way to a whopping 420-1050mm. 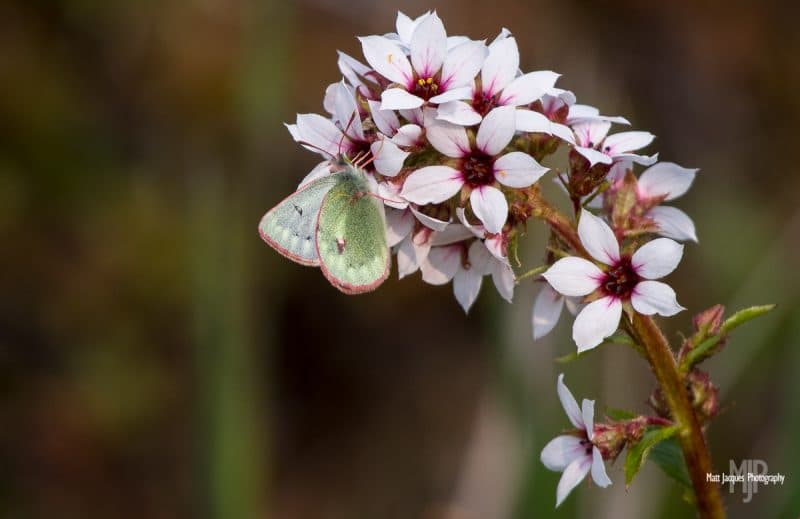 Since the 200-500mm has such an incredible minimum focus distance to begin with (just 2.2m or 7.22ft), impressive magnification that borders on macrophotography is possible with close subjects. This brings up one of my persistent issues with the 200-500mm. It is absolutely stellar and sharp, even wide open, at close and medium subject distances – but maintaining sharpness at or near infinity focus has been somewhat of an issue.

Of course, infinity focus at 750mm or 1050mm involves compressing a lot of distance into a very narrow field of view, so haze and other atmospheric conditions like heat shimmer come into play. I encountered this in the Arctic Refuge, where we watched the Porcupine caribou herd as they began the longest land migration of any mammal. We were not lucky enough to see the herd particularly up close, but thanks to the ridiculous reach of the D500 and 200-500mm pairing, composing a decent shot from afar was manageable. However, shooting wide open at f/8 (with the TC-14E III), I was getting more soft images than sharp. Things were generally better with the 200-500mm alone, but it’s one area that I’m not perfectly satisfied with, even after Nikon gave my lens a look over and thumbs-up. 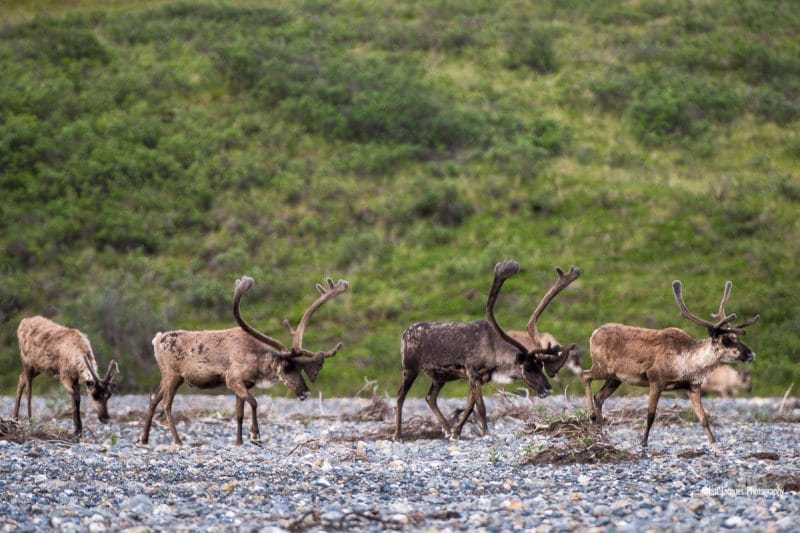 Porcupine caribou on the move along the Hulahula river in the Arctic National Wildlife Refuge.

Otherwise this combination has been an absolute joy to shoot with. 10fps has come in handy in many situations already, and in those cases it was a revelation to be able to just sit on the shutter button without the camera’s buffer getting anywhere near bogged down. I’ve also taken advantage of the Auto-ISO setting, and have walked away with twilight shots of wildlife taken at ISO 25,600 that I simply would have missed otherwise. Sure, the resulting image quality is not perfect, but when you’re in a once-in-a-lifetime place like the Arctic Refuge or staring at a species you may never see again, it’s an awesome feeling to get the shot despite sub-par conditions. 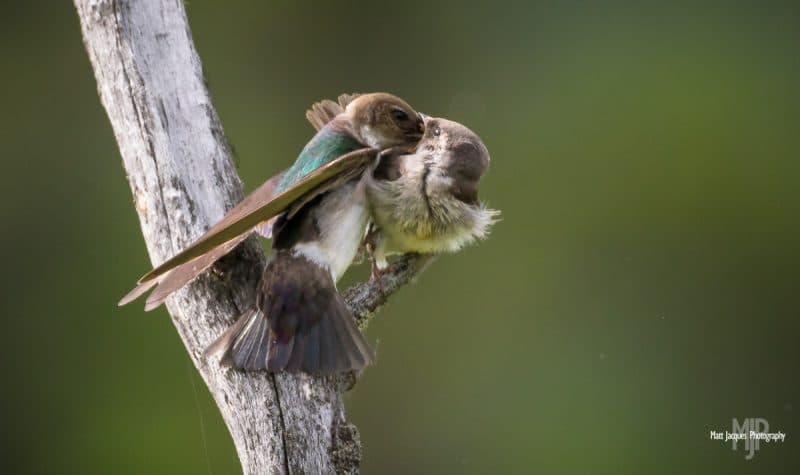 Fledgling violet-green swallow gets fed. 10fps on the Nikon D500 allowed allowed this moment to be captured. 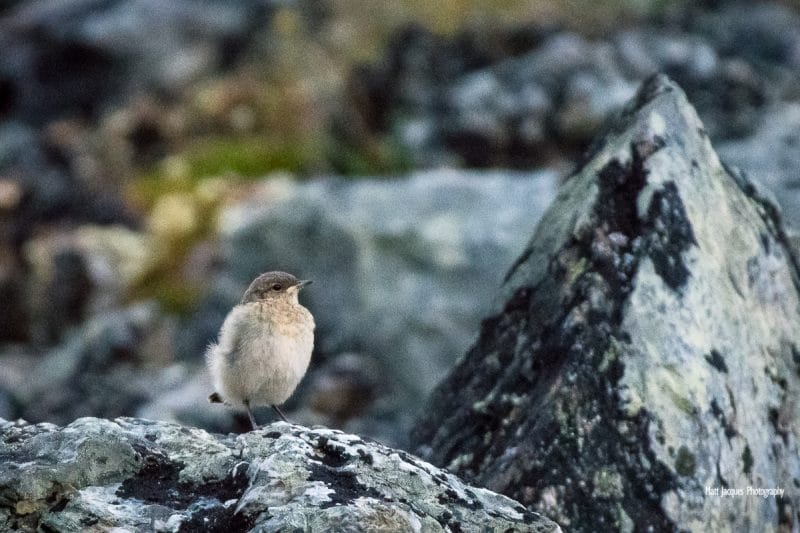 The northern wheatear bird travels from as far away as north Africa to breed in the Arctic National Wildlife Refuge. The D500’s ISO 25,600 allowed this shot to be captured near midnight.

Despite giving up over 15MP to the D810, at 20.9MP I haven’t been disappointed in the resolution or image quality at all. I can still crop images if necessary, while maintaining respectable image dimensions for printing. While the D500 has more densely-packed pixels than my D810, it still has outstanding dynamic range and performs admirably at high ISOs.

That image quality potential is really unleashed by the camera’s industry-leading autofocus which uses the same engine as Nikon’s flagship D5, just-right ergonomics and a lightning-quick data pipeline that does everything to ensure there are no barriers to capturing the image you want when the situation presents itself. Although I have some reservations about use with a teleconverter, the 200-500mm really is a perfect match for the D500. 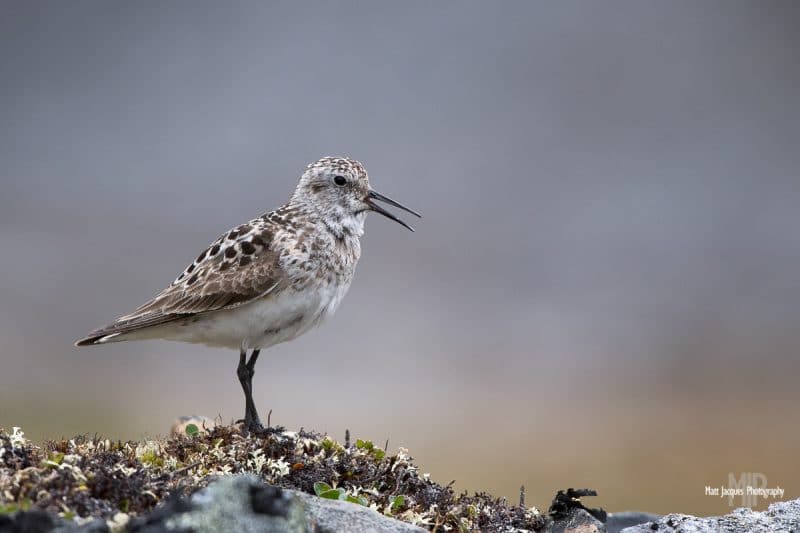 Sure, some of Nikon’s exotic primes might be able to deliver even quicker autofocus and flawless sharpness, but I would not want to be hiking through the Arctic tundra with one for very long. As it worked out, I was absolutely spoiled by having this lightweight, long-reach combo in my pack on this trip. Both the D500 and 200-500mm really excel at getting out of the way, making less to worry about and exhaust you when you’re venturing long distances or hunkered down on the edge of a marsh for hours at a time.

Overall, I’m extremely happy with this pairing and can’t imagine much surpassing it. For the combined price of a D500 and a 200-500mm f/5.6, about $3200, it’s the best way to get into serious wildlife photography that I can think of. It has completely removed almost every excuse I had before for missing the shot in the field, and made it easier just to pick up and go whenever an opportunity or inspiration presents itself. Whilst I had originally intended to just borrow the D500 from our friends at B&H Photo to test out on this trip to the Arctic, I ended up buying one! 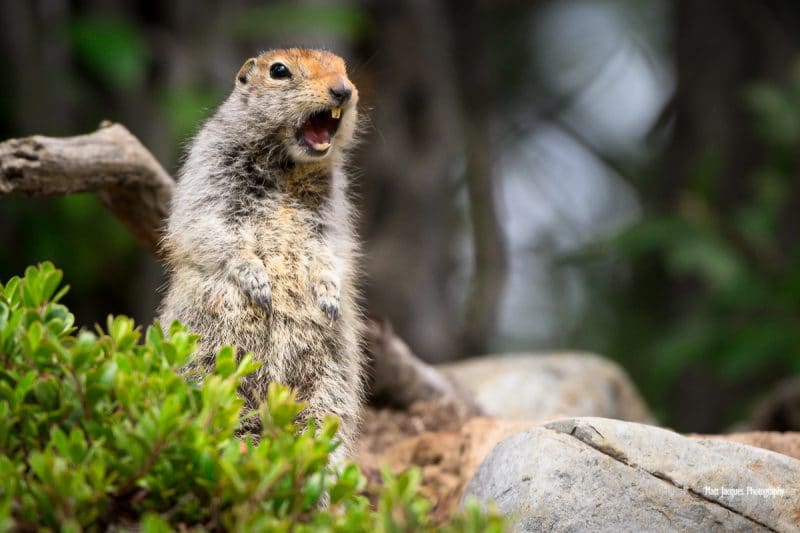