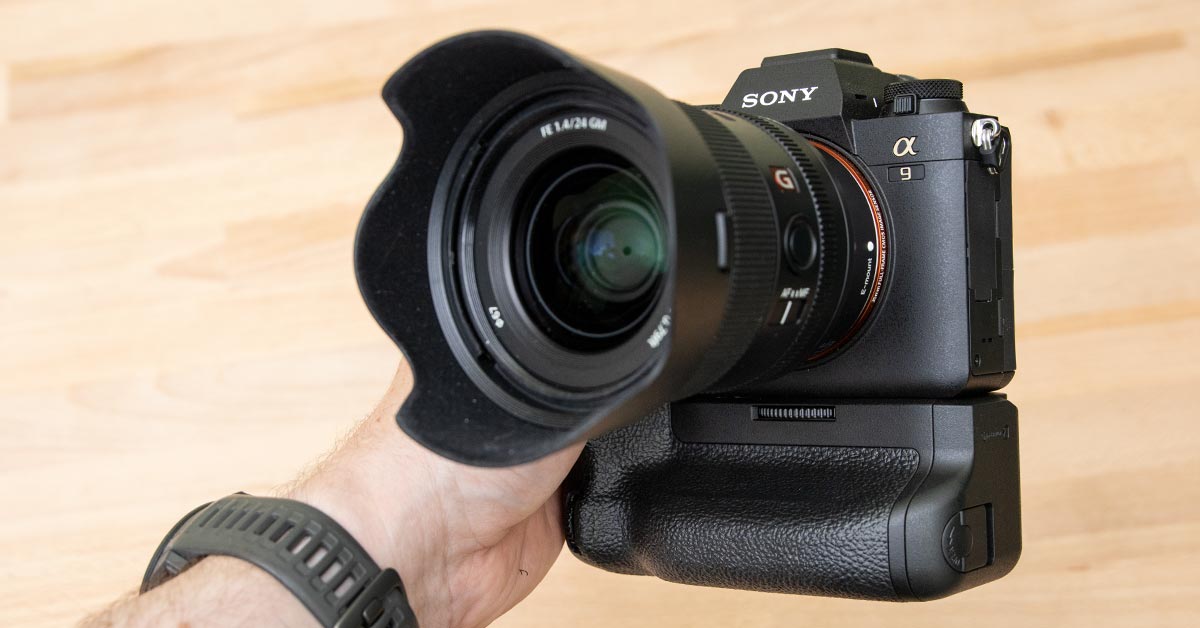 The Sony VG-C4EM battery grip is designed for the Sony a9 II and the Sony a7R IV, at the moment it remains to be seen whether it will also work with the upcoming a7S III. What I learnt while reviewing this grip is that unlike Canon and Nikon, Sony really knows how to make a battery grip.

Sony’s battery grips are designed to perfectly match the cameras they are made for. This means that the ergonomic improvements that were implemented in the a9 II and the a7R IV are also carried forward to the VG-C4EM. Primarily this means the hand grip is much larger, the AF-ON button is also much larger and the AF point controller is a little larger, with a more textured surface. All very good things, as anyone who has used the newer iterations of Sony cameras will know.

As someone who has mostly used Canon battery grips in the past, I was delighted to find that the relative button placements on the VG-C4EM grip are absolutely identical to the button placements on the camera. In other words, things like the distance between the AF-ON button and the AEL button are identical on the camera and the grip. The vertical and horizontal offset of the AF-ON button is also identical, so that the button always falls underneath your thumb in the same way as it does on the camera.

Now you might think this is logical – of course it should be like that! And you’d be right. But as any Canon battery grip user in the last decade will know, it is apparently not logical to everyone! For some reason Canon like to space out their buttons differently on the battery grips, meaning your fingers, through muscle memory induced by using the camera, often fall in the wrong place. As an ex Canon user, it was annoying enough to me that I couldn’t even use their grips. And the less said about Nikon’s recent Z6 and Z7 grips the better… they didn’t even put buttons on them at all.

What all of this means is that the grip is immediately comfortable and familiar, and if your fingers know their way around the camera, they know their way around the grip when using it vertically. It’s by far the most comfortable camera grip I have ever used, and I include the built-in grips on camera like the pro-body Canon 1D X series and Nikon D3/4/5 in that assessments. While I understand that grip size and comfort has a little to do with how big your hands are, I’d say that most people will find this very pleasing to use.

The grip holds a pair of the NP-FZ-100 batteries, which again is a smart choice compared to… ahem.. Nikon, who use the D series (D4/5/6) batteries in some of their DSLR grips, thus forcing the photographer to own and carry two sets of battery chargers and battery types if they want to switch back and forth between using the grip and not. Sony made all the right choices here.

The batteries can both be charged through USB-C port on the camera, where it will first charge the most depleted battery and then move on to the second battery. Both battery levels are displayed individually on the camera screen or in the viewfinder, including accurate percentage levels is you’re using the official Sony versions of the batteries. In use, the camera depletes first one battery and then the other, with a small arrow indicating the currently-in-use battery on the LCD screen. This is good because as one battery dies, you can take note of that and quickly swap in a replacement at some point. It means you never get to a situation where both batteries have to be simultaneously dead, as long as you have at least one additional battery that you have on charge outside the camera. For me this works well. I simply keep a third battery in my camera bag with a Nitecore USB charger and an Anker 10,000 PD USB power pack. When the camera isn’t in use I plug the pack into the camera. When it is in use, I’ll usually put the third battery on charge in the handy USB charger, which can also be used in my car if I’m driving.

While I’m happy to see that the batteries can be charged over USB, this is the one area where I think Sony missed a trick. If they had also included an additional USB-C port on the grip itself, you could then use it to charge a pair of batteries while it was not in use. It’s a minor thing and I don’t know of any other brands that allow that either, but it is an idea for the future, eh Sony?

Conclusion – Should You Buy It?

For sports and wildlife photographers, I think this is an absolute must-have buy-it-right-now accessory. And I’m saying that as someone who initially didn’t think they would need it, and used an a9 II without one for a couple of months. Whenever I got myself in a situation where I was waiting for long periods of time with the camera in a vertical orientation, waiting for the action and the right moment, it became a real pain – literally and figuratively. In some situations where I was lying awkwardly on the ground waiting for wildlife, I know that I missed some shots because of the awkward way I was having to hold the camera and large telephoto lens in the vertical orientation.

It’s not to say I wouldn’t ever shoot without a grip again. If I had to hike 20 miles to a location and needed to lighten my pack, it would be the first item to go. But for all other times when it’s no problem to fit in in my bag, it vastly improves the shooting experience when a good proportion of your images are being shot vertically.

If you’re primarily a landscape photographer (probably with an a7R IV) I don’t see much reason for buying this battery grip. With your camera mounted to a tripod a lot of the time, you won’t get the major ergonomic benefits of the grip, or need the capacity to shoot 4000 frames without swapping a battery. You’re also just adding weight to your pack while you hike around. Sure it looks cool, but it’s not a cheap accessory by any means, and your money will be much better spent elsewhere.

For portrait photographers it’s going to be a harder choice. In those situations there’s always a lot of switching back and forth between camera orientations, so the grip comfort will be appreciated. But on the other hand a smaller looking camera can seem a lot less intimidating to your subjects and help you make a better connection with them. With the grip on, it certainly feels more like you are hiding behind a camera.

When it comes to weddings, and when I think about being on my feet all day long with a pair of bodies on my shoulders, I would probably opt to go without the battery grips. The weight saving on pair of them would be noticeable, and again, a smaller camera is way less obtrusive and intimidating for people.