People Are Mad About the Sony a9 II – My Thoughts 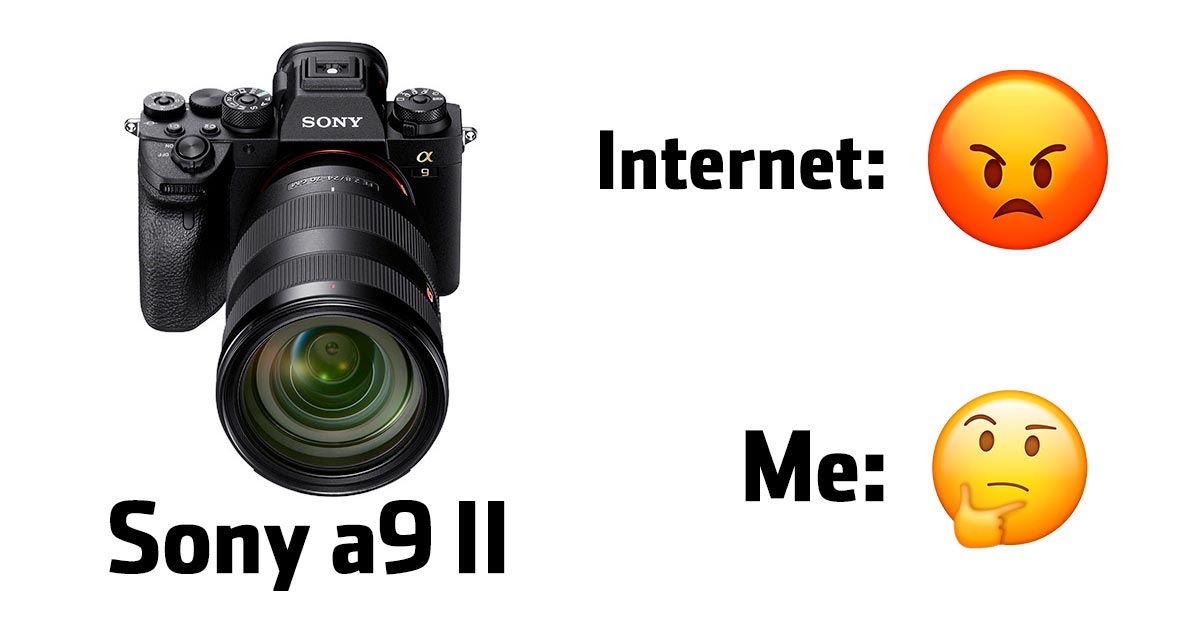 To get to the meat of this matter, we first need to talk about the Sony a9 and its adoption and acceptance by the pro community. When Sony launched the original a9 mirrorless camera, people were awed by the 20fps shooting with no viewfinder blackout, and amazed by the autofocus tracking capabilities. Almost every major photographic publication, print and web, would peg this camera as the top performing professional camera for sports photography, and to some extent wildlife photography, depending the subject.

At the time, the major weakness to the Sony mirrorless system was the total lack of super telephoto lenses that the professional sports photography community needs to go with such a camera. I couldn’t wrap my head around that at the time, and I do think it was a blunder on Sony’s part to release a camera that didn’t have the right lenses for the target audience. I know many who disregarded the camera on that basis, and rightfully so. To many pros it made no difference how good the camera was if it didn’t have the 400mm f/2.8 and 600mm f/4 lenses that are the staple.

Eventually Sony fixed this and launched the stunning 400mm and 600mm GM lenses that are now on the market, along with the very reasonably priced 200-600mm G lens.

At the same time, Sony continued to offer major firmware updates for the a9 that actually pushed the autofocus performance even further, including the latest update to V6 that added realtime eye AF tracking for animals. A massive performance update that was delivered just weeks before the a9 II was launched. Have you ever heard of a company doing such a thing? I certainly haven’t. Getting major feature updates to a camera is usually like getting blood out of a stone. Yet Sony was willing to do it within earshot of the a9 II launch.

In recent months, with the 400mm and 600mm GM lenses now on store shelves, I have seen a slew of photographers ditching Canon and Nikon systems to move to the Sony a9. The primary reason for this is the remarkable autofocus system, and I say this as a career long Canon user myself. The first time I tried an a9 I was absolutely jaw-hit-the-floor floored by what I was seeing through the viewfinder in terms of its tracking ability. It is leagues ahead of anything Canon and Nikon have released to date.

So the a9 gets a massive update with firmware version 6, professional super telephoto lenses are now shipping, and certainly in the case of the 600mm GM, outperforming the equivalent lenses made by Canon and Nikon.

Then the a9 II is announced, and the internet nearly has a meltdown.

While the a9 was much loved by reviewers for many reasons, it was not without flaws. Weather sealing could have been better, the buttons were a bit small, the second SD card slot was only UHS-I speed and the grip was too small for camera that would have huge lenses mounted to it. When the a9 was launched, people loved to moan about these things, so Sony fixed then on the a9 II.

The a9 II features the same sensor as the original a9 but the ergonomics of the body have been greatly improved and the people got the larger grip and larger buttons that they wished for. Both SD card slots are now UHS-II, weather sealing has been improved and a new faster processor should deliver even better autofocus tracking, as well as improved high ISO performance. On top of that, there’s a host of communication improvements for the pro sports community, including faster 5Ghz wifi and gigabit ethernet.

Despite improvements that have been called for since the launch of the original a9, the internet forums are full of people who berating Sony for the launch of this camera, stating that it is nowhere near enough of an improvement to deserve the “II” moniker.

In many cases I see people saying things like “why have Sony just updated a bunch of things nobody cares about”. But the funny thing is, these are exactly the things that people did care about when the a9 was launched. Over and over people complained about the poor ergonomics, lacklustre weather sealing and the speed of that second SD card slot, and now these have been fixed, they suddenly become things “nobody cares about”.

It seems that many people are also overlooking the fact that the improved processor speed will improve the autofocus tracking capabilities even more, on what is already the clear industry leading camera in this regard. Remember when I told you earlier that pros, at least the ones I know, are primarily moving to the a9 for its AF tracking? Well now with the a9 II it’s going to be even better! What’s not to love about that? Oh yeah, the mechanical shutter speed also doubled from 5fps to 10fps. That’s a huge leap!

The other argument I saw people throwing around was that all of the improvements in the a9 II are simply things that should have been in the a9 in the first place. For me this is a preposterous thing to say. All camera iterations are based on feedback from the previous version, and if people entirely wrote off new versions of a camera because the improvements “should have been in the original camera”, the industry would not sell very many cameras! In the history of photography, no manufacturer has ever got a camera 100% right first time. Sometimes it’s down to technology not being available to meet people’s desires, and sometimes it’s a cost issue and the manufacturers are juggling features to hit a desired price point.

And on that point, don’t forget the a9 II is over $1000 cheaper than the current street price of the several years old Canon 1D X Mark II. I’ve no doubt when the 1D X Mark III comes out next year, the a9 II will be several thousand dollars cheaper than it.

If you look back through the evolutionary history of Canon’s 1-series cameras, most new versions have a very similar amount of updates to the a9->a9 II progression. So why are Sony fans so pissed about all of this? I think partly Sony are a victim of their own success here. Some, but not all, of their camera updates have been huge leaps forwards, but was it really possible that they could continue that same trajectory? To me it always seemed unlikely. What were people expecting?

Well, for one thing, they were expecting a 36mp sensor. The rumour website Sony Alpha Rumours repeatedly reported that a 36mp sensor was likely in the a9 II. Unfortunately, the internet being what it is, that then got repeated on many other websites as the a9 II is definitely going to have a 36mp sensor. Whilst I always take rumours with a grain of salt, when a website repeats it over and over again, you start to think it probably is true.

Well, it turns out that popular rumour website has a pretty bad track record with rumour reliability, and clearly they love to create clickbait articles. But all of this left much of the Sony community expecting a 36mp sensor upgrade in this camera, and I genuinely think this had an effect on the internet’s reaction to the a9 II.

Now many people perceive it as a camera that doesn’t have a 36mp sensor, rather than a camera that does have improved weather sealing, doubled mechanical shutter speed, better ergonomics, better high ISO performance, better AF tracking, faster SD card slot, USB-C 3.2 Gen 1 connection, improved wifi and ethernet speeds as well as a host of other pro connectivity features.

And before you cry out “SONY FANBOY” in the comments here, let me remind you that I’m a Canon DSLR user!

Sony will sell a boat load of a7R IV cameras, a ship load of a7 IIIs (and IVs when it comes out). Those are the Alpha cameras for the majority of their customers, and just as the Nikon D5/6 and Canon 1D X series cameras are rarely seen in the hands of anyone but professionals, so it will be with the a9 II.

This camera probably isn’t for you, but the a9 II is an improvement over what many people already perceive to be the gold standard in professional camera bodies. How can that possibly be a bad thing?