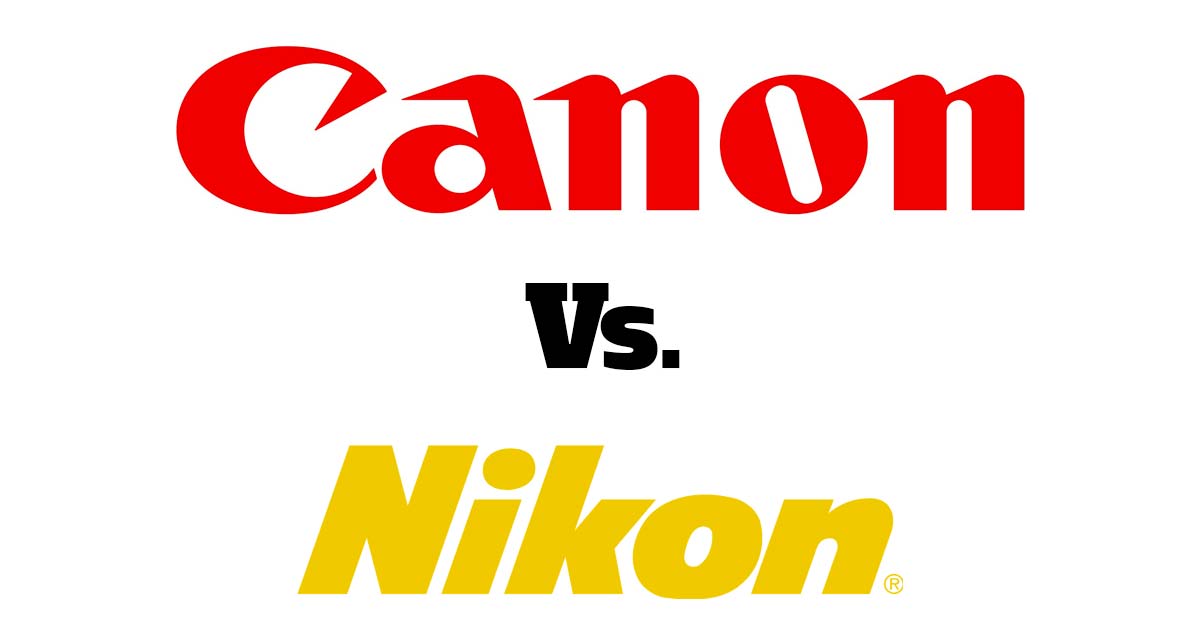 The Canon Vs. Nikon debate has raged for decades and whilst you could probably argue that it has now become Canon Vs. Nikon Vs. Sony, I don’t think I’m quite ready to tackle that broader argument. However, this week I have finally decided to write something about the longer standing traditional match up because I’ve finally reached some sort of zen-like clarity about it.

I’m a Canon user myself and I have been all my career, but to put Nikon users at ease that this isn’t going to be an unfair fight, I’ll preface this by saying that Canon’s recent camera releases have been lacklustre at best. We’ll get into that in more detail later in the post, but I really do want to make it clear that I’m not going to sit firmly in camp Canon and pretend that everything is rosy.

Everyone with me then? Ok, let’s get into it…

In the couple of weeks prior to writing this article we have seen major announcements from both Canon and Nikon. The new Nikon D850 appears, on paper, to be the most exciting DSLR that has ever been launched. It combines the speed of the Nikon D5’s autofocus system with a fast frame rate and a near-50MP sensor. Not only that, but it also introduces new features such as a BSI sensor, 8k timelapse mode plus a unique and innovative focus stacking feature that has macro and product photographers foaming at the mouth. More than any other camera I have seen, this really does have something for everyone. Nikon has a good track record with high ISO performance and dynamic range capabilities so I’m sure this is going to be a great performer.

Whilst Canon didn’t launch a new DSLR this week, they did add to their already burgeoning lens lineup with not one, but four new L-Series lenses. An 85mm f/1.4 L IS, and a trio of new tilt-shift macro lenses (50mm, 90mm, 135mm).

This pair of releases from the two brands in question really underlined their relative strengths to me, and was the catalyst to finally offering some thought on this whole topic. Nikon has been the high ISO king for some time, and the Nikon D810 set new standards for the dynamic range we can expect from a DSLR. Canon always seems to be playing catch-up when it comes to cameras, and not in a way that can simply be explained away by opposing release schedules. They seem content to simply try and match the best existing competition, rather than sticking their necks out with major new innovations. The 5D Mark IV is a great camera and I was overjoyed to read about, and then experience the improved dynamic range that it (finally) got by using new sensor technology. It was a night and day difference to the 5D Mark III in that area, but it still didn’t reach the DR of a several-year-old Nikon camera.

To make matters worse, the 6D Mark II seems to have been given the old sensor technology, so whilst Canon’s mid-range fans were teased by the improved 5D performance, it simply didn’t materialize in the 6D Mark II. In my eyes, it’s one of Canon’s biggest mistakes in the last decade, and something that again underlined to me the difference between the way that Canon and Nikon are currently going about designing new products. As every review is keen to point out, it’s not that the 6D Mark II is a bad camera that takes bad photos, it’s just nothing new. At all.

So why am I still a Canon user then? I’d love to shoot with a Nikon D850, but there’s still one big thing that’s keeping me loyal to Canon: Lenses.

Canon’s lens development department seems to operate on an entirely different level to their camera department, and they’ve put out an incredible string of lens innovations over the last decade. Unlike their camera lineup, when Canon puts out a new lens they don’t seem to be content with simply matching (or getting close to) existing products by other manufacturers. Instead, they innovate, and it’s simply something that hasn’t been said about their DSLRs since the addition of HD video recording in the 5D Mark II. When it comes to lenses, it’s usually Nikon that is playing catch up, and in many cases it takes them a heck of a long time.

Let’s take a look back at some of Canon’s unique and innovative lenses over recent years:

2012 – Canon 40mm f/2.8 STM pancake lens – They don’t all have to be big expensive monster lenses. The diminutive 40mm pancake lens always gets a smile when I put it on my camera.

2015 – Canon 11-24 f/4 L – The widest rectilinear full frame lens on the market for Canon or Nikon. Not just wide, but also a stunning performer.

2016 – Canon 400mm f/4 DO II – The only 400mm lens with diffractive optics and probably my favourite Canon lens on the current market due to its tiny size. Nikon have something similar on the way now too, but a super telephoto diffractive optic lens has been in Canon’s lineup for 17 years.

2019? – 600mm f/4 DO IS – Canon has already shown prototypes of a 600mm DO lens, which is likely to come to market within the next couple of years, shaving a huge amount of size and weight off a typical 600mm lens design.

These are just the new innovations that I’m listing here, it doesn’t even take into account the updates that are the 24-70 f/2.8 L II and the 100-400 L IS II which take zoom lens sharpness to a whole new level.

Of course there are some Nikkor lenses that I’d love to see in the Canon lineup as well, such as the 28mm f/1.4, but by and large there has been very little innovation from the Nikkor lens team in recent years. Even the new flagship 70-200 f/2.8 VR3 release in 2016 was met with puzzled faces from many people when they swapped the focus and zoom rings around, causing some major handling issues.

When you consider Canon’s most recent lens releases, and Nikon’s most recent camera releases, the choice is pretty simple: Do you want the chance to own the best lenses or the best cameras? It’s clear to me that in general Nikon make higher performing cameras these days but Canon’s lens division is kicking some ass. So which do you prefer? Nikon make very few “bad” lenses, just as Canon make few “bad” cameras, but which piece of the puzzle is going to inspire or enable your photography? That’s really what you have to ask yourself.

I own many of the Canon lenses that I listed above, and I love to see a new lens design that pushes optical boundaries. When I get a new lens that gives me a new ability, I run around with it attached to my camera for months and months, exploring new opportunities and looking for ways to create images that were previously not possible for me. When I get a new camera, it just tends to feel like a new tool. I’m excited for about a day, and then I move on. For this reason, I feel I’m well suited to the Canon brand.

How do you react to a new lens or a new camera? Understanding that is probably the key to making your choice between these two brands.

A Complete Guide to Canon RF Lenses and Their Specifications