Edelkrone FlexTILT 2 Head Review – It’s Weird, But Is It Wonderful? 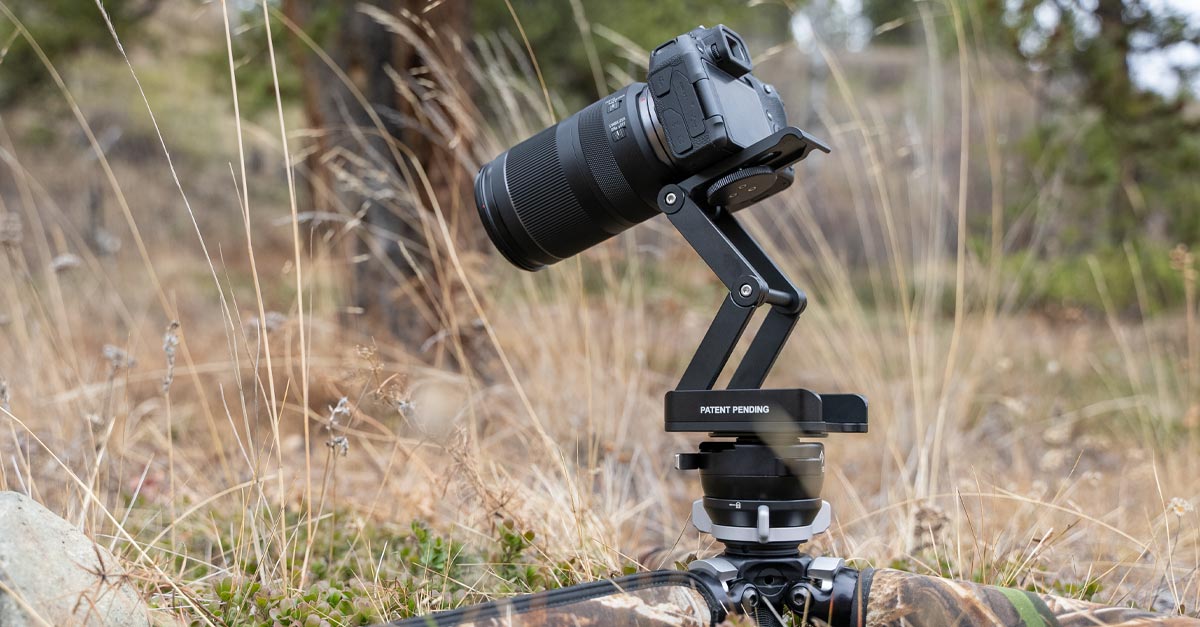 I have reviewed many ball heads, fluid heads, monopod heads, pano heads, gimbal heads and leveling heads on this website. The FlexTILT 2 head from Edelkrone is none of those things. It’s weird and wacky, and I just had to try it out to see whether it was useful, and how well it was made.

The FlexTILT head is a compact package when its full collapsed. You shouldn’t have any issue finding space for it in your bag, although the weight is a not-unnoticeable 15.5 oz (440 g). The top plate features a 1/4″ 20 threaded stud that is rotated by a wheel, and the base has a useful bubble level. The recommended load is 5.5 lb (2.5 kg).

On the base of the head is a 3/8″ 16 threaded hole, but Edelkrone does also provided two 1/4″ 20 to 3/8″ 16 adapters in the box with the head. With the help of these adapters, you’ll have no problem mounting the head to a tripod or another head, and you’ll have no issues securing a payload to the top.

The angles and movement of the legs are probably best described by the photos above. With three distinct sections and the base, there are a huge number of shapes that can be created with this head. Some of them will of course only hold a camera if they head is attached to a larger tripod that has a wider base, but some are self-supporting, meaning you could use this head to position a camera on a table. (see photos below)

Overall I was very impressed by the build of this head. The machining quality is very high and the hinges move smoothly, even when significant tension is applied by the hex bolts. As this was my first purchase from Edelkrone I wasn’t quite sure what to expect, but clearly, they have high standards of production.

Out of the box, I found the tension in the hinges to be too little to hold a Sony mirrorless camera. Thankfully you are able to adjust the tension of every hinge using an included hex key, and it takes only a few degrees to stiffen things up. During my time with this head, I have regularly needed to tighten or loosen the hinges, requiring me to carry the hex key at all times. It’s, therefore, a shame that Edelkrone did not include a simple magnetic slot on the head to safely store the key.

A second pain in the ass is the fact that they inexplicably use a different sized hex head on the screw that adjusts the panning base tension, requiring you to carry a second hex key. These two screws are so close in size that I fail to see any reasonable reason for using two different sizes.

Ground-level macro shooting can be restrictive with a large tripod and ball head configuration. It’s hard to get up and over small subjects, and even harder to do it without casting a shadow on your subject from the tripod. With the FlexTILT head, I was pleased to find out that my gut feeling was correct: This is a very useful macro shooting accessory.

Although Edelkrone doesn’t promote the head in this way because they primarily sell products to filmmakers, I’m sure you can see right away from these photos that it’s a useful piece of kit for ground-level floral and insect macro. When using a regular ball head a tripod, my macro photos usually end up being in profile to the subject because it’s that much easier to set up in that way. With the FlexTILT head, I found myself eagerly investigating a variety of different compositions from much higher angles of elevation. It was great fun, and I’d definitely use the head in this way again for macro work.

One thing that is important to note is that you will need to put the head on a ball head or a leveling head to make this work for your macro shots. The FlexTILT head can tilt forwards and backwards, and pan left to right, but it can’t roll left or right to adjust the horizon line. In the photos on this page you’ll see I have attached it to a Really Right Stuff Universal Leveling Head using an Arca-Swiss plate as a quick release.

FlexTILT Head for Sliders and Video

Edelkrone promotes this head as the perfect partner to a video slider. While maintaining the horizontal sliding movement of the camera, it allows you to position the camera out over the edge of the slider to dramatically increase the available moves you can create with that kind of setup. The short video below does a good job of demonstrating some of these uses.

I have a slider on order at the moment, and I’ll update this review with some thoughts on this functionality once I have had some time for further testing. To me, it looks like a no-brainer addition to a slider kit, as long as you are using a relatively lightweight camera such as a DSLR or mirrorless camera.

The Edelkrone FlexTILT 2 head isn’t going to be replacing your ball head any time soon. But that’s not the point. This is a specialized head that allows you to reach a few new angles in conjunction with your ball head.

Prior to purchasing this head from B&H Photo, I hadn’t seen many people talk about this head from a photographer’s point of view. After all, Edelkrone makes gear for filmmakers so that’s how they market their products. Although I always intended to use the head on a slider in the way it was primarily designed, I was also fairly sure that I would find a couple more uses for it for stills photographers. I wasn’t wrong.

When used for ground-level macro photography this head is a fantastic tool. The gooseneck design allows you to get your camera up and over your subject in a way that would be much harder if you were mounted on a tripod with a ball head in the traditional way.

Usually, if you wanted to shoot macro photos straight down, the easiest thing to do is to invert a centre column on your tripod and shoot with the camera upside down on a ball head. It’s doable, but this head makes it easier and with less chance that your tripod will cast a shadow on your subject.

While I find the head to be useful, I do think that at $150 it’s overpriced. I picked mine up when it was on sale for $100 and I feel that this would be a much more reasonable price for this product. There’s also no getting around the fact that Amazon is absolutely full of knockoff versions of this same design that go for anything between $30 and $50. Are they built to the same standards and able to carry the same load? I doubt it for those prices, but I’m sure many consumers will still take a gamble and give some of them a try. Personally, I have a problem with buying products that are such blatant ripoffs of other products, but your mileage may vary.

The FlexTILT 2 head can be found at the following links.