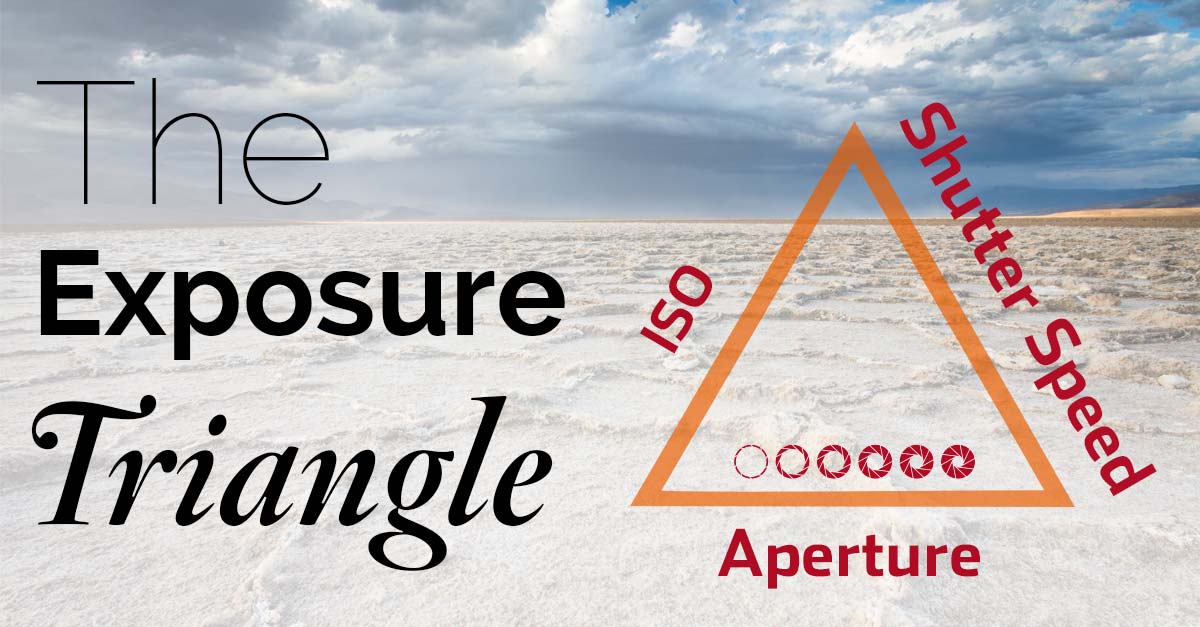 In automatic exposure mode, your camera will select settings for you, to achieve an optimal overall exposure in your photo.Once you are comfortable shooting that way, you might want to move on to semi-automatic modes like aperture priority (AV), shutter priority (TV) or even fully manual (M). These modes require a little more practice, but they allow your creativity to run wild and that’s what photography is all about!

Before we start making the decisions about exposure, we must have a solid understanding of it. Exposure is a measure of how much light we allow to hit the sensor of our digital camera when we press the shutter button. It’s not a single number though. In fact, it’s a combination of three numbers; aperture, shutter speed and ISO. The relationship between these numbers is very important and that’s what the exposure triangle describes. Before we get deeper into the important discussion of how these three numbers, the ‘pillars’ of photography, interact with each other, it’s good to have a brief definition of each one:

Aperture is the opening in the middle of the lens that lets light pass through the barrel and onto the sensor when the shutter opens. We use f-numbers as a measure of the size of this hole. E.g f/2.8 or f/11

All cameras have a physical shutter that opens and closes when you press the shutter button. Opening the shutter exposes the digital sensor to light, and the length of time that the shutter is open, is called the shutter speed. Most shutter speeds are expressed as a fraction of a second; for example, 1/1000 or 1/125.

ISO is a measure of how sensitive the camera’s digital sensor is to light. It’s expressed as a number, like ISO 400, and the higher the number is, the higher the sensitivity. When a camera is set to a more sensitive setting, it gathers more light in a shorter time.

Note: As follow-up articles to this one, I’ve written detailed, yet simple guides to each of these three things that explains the effect that different settings will have on your photos. You may wish to read them after this article, or you may wish to refer to them simultaneously, so I’ll post the links here as well as at the bottom of the page.

Normally we are seeking to create an image the depicts, as close as possible, what we saw with our own eyes. Digital camera can’t capture the same range of brightness levels as the human eye, but our aim is to create the best approximation without loosing too much detail in the bright and dark parts of the image. There will always be stylistic differences in what people deem to be the ‘correct’ exposure though. Much like the other ‘rules’ of photography, there’s a bit of room to put your own spin on things and usually it’s pretty obvious when something is wrong versus. simply being a personal choice.

The example below shows you what are very clearly incorrect exposures, with the central portion being my personal choice of ‘correct’.

Definition Of A ‘Stop’ Of Exposure

This is a term that we are going to be using a lot in the rest of this article so let’s make sure that we’re absolutely clear about it. One stop is equivalent to a change of either aperture, shutter speed or ISO, that results in twice as much light reaching the camera’s sensor.

Of course all of these work the other way as well! If we increase by one stop, we are simply halving the amount of light in the exposure. You might hear someone say, “I think my photo is about a stop underexposed.” What they are saying is that the correct exposure requires twice as much light. You might change your aperture, shutter speed or ISO by one stop in order to achieve this, or you might use a combination of all three. The relationship between them is what we’ll discuss in the exposure triangle next.

Sometimes we see exposures talked about in terms of exposure values (EV). This is a relative term that takes into account both shutter speed and aperture. +1 EV simply means +1 stop. -2 EV would mean two stops less of light. These days it’s very unusual to see EV used as a definitive value for a specific exposure, though technically EV 0 is an exposure of 1 second at f/1.0. You are far more likely to see it used relatively, as in +3 EV or -1 EV meaning +3 stops or -1 stop.

Right, now that we’ve got all of our definitions sorted out, let’s get down to the meat of the subject!

Each of our three settings controls the exposure in a different way. Shutter speed’s variable is simply time; the longer the shutter is held open, the more light hits the sensor and the brighter the image will be. Aperture’s variable is area; the wider the aperture is, the greater the area of the hole in the lens barrel and hence the greater the amount of light that passes through it. ISO’s variable is a tough one to imagine because it’s not a physical or mechanical change, but the higher the sensitivity, the more light is recorded in a specific time.

Since we can measure all three of our settings in stops, they become interchangeable, and this is the key concept. If we have the group of settings that result in a perfect exposure, but we decide to modify one of the settings by one stop, we must compensate for that by modifying one or both of the other settings by a total of one stop in the other direction if we want to maintain the same overall exposure.

Once you wrap your head around this concept of balance, exposure suddenly doesn’t seem like a dark art after all!

A concept that’s often used to explain this is the analogy of a full bucket of water. To fill a bucket of water with rain there are three key variables; the diameter of the bucket, the length of time you leave the bucket out in the rain, and the intensity of the falling rain. If a full bucket represents a correctly exposed image, there are many combinations of our three variables that will result in a full bucket. You could have a smaller diameter bucket (assuming same overall volume), but leave it out longer in the rain. Or you could have a much more intense rain shower and leave it out for much less time. Eventually the bucket will always get full.

There’s no need to jump from automatic to manual exposure mode in single leap, in fact I’ll let you in on a little secret; most professionals don’t even use manual exposure mode! Whilst it’s important to know how to use it, for those times when you absolutely must (and there are those times), it’s not usually the best way to shoot. Most of the time people like me are shooting in aperture priority mode or shutter priority depending on whether shutter speed or depth of field is our…errrrr…priority! Really, you just need to get out there and practice! Eventually it will all become second nature and you’ll be quickly adjusting your exposure without even looking up from the viewfinder. That’s the great thing about this magical exposure triangle relationship. You can actually feel your way though it without even looking. Need a little less depth of field? Three clicks down on the aperture wheel means I’ve got to go three clicks up on something else. Maybe I’ll take two clicks on the shutter speed wheel and one on the ISO. Or maybe I’ll do all three on ISO. As long as I’m compensating elsewhere on the triangle then I’ll be maintaining my exposure.

Test Your Knowledge! Are You Ready For Manual Mode?

If you’ve read the posts about understanding shutter speed, aperture, ISO and the exposure triangle, you should have a solid foundation for your photography. We’ve designed a quick quiz with 12 questions that will bring everything together and make sure you are ready to move onwards.

Now that you’ve got a solid understanding on the relationship between our three pillars of photographic exposure, it’s time to delve into each of them in more detail if you didn’t already click through to these. The following set of articles takes everything there is to know about each one, and distills them down into simple, easy to understand resources with reference tables to come back to in the future (bookmark them!). You’re now well on your way to putting that camera in manual mode!

10 thoughts on “Understanding Exposure And The Exposure Triangle”