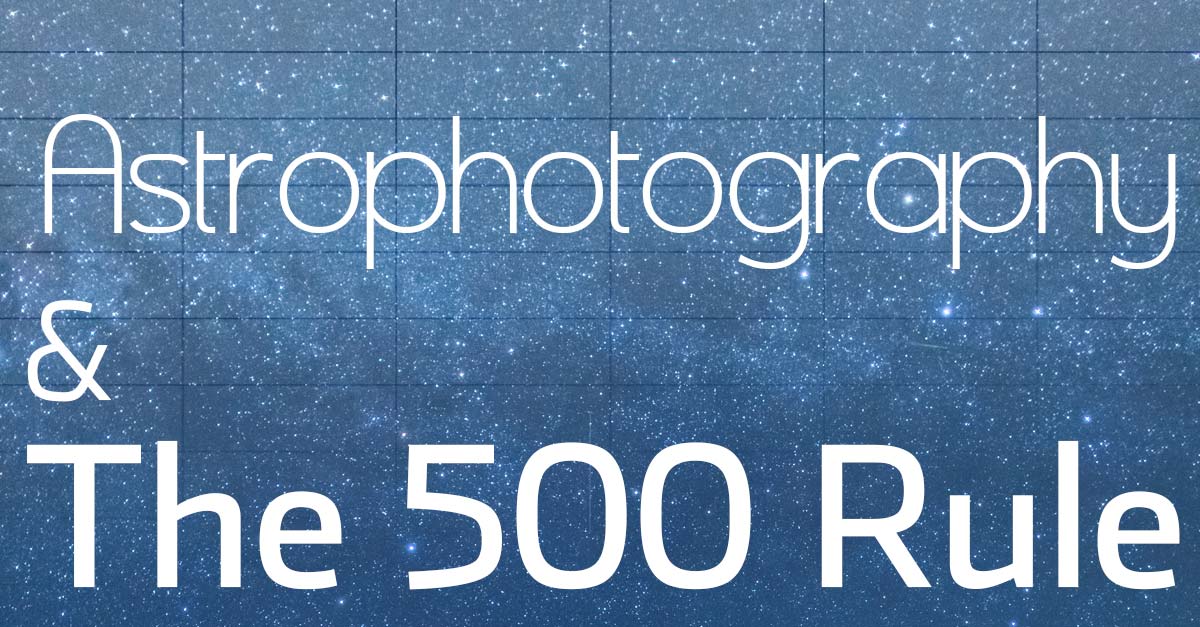 I’ve been spending a little more time out at night recently while I work on getting some new content together to teach you guys about astrophotography. Whenever you’re shooting stars there’s a question you have to immediately ask yourself and that’s whether you want to render your stars as point stars or star trails. There isn’t really a good middle ground between the two of these things because a slightly trailed star just comes across looking like a slightly blurry point star. In other words, it looks like you made a mistake when you were shooting it. Of course, this can cause a few problems because of the inherent lack of light in your nighttime location means that you require a pretty lengthy exposure time. What’s more, when people first starting shooting at night they are often very surprised to see just how short an exposure time can start to produce trailing on their stars from the rotation of the earth.

The exact length of exposure that you can get away with depends on a few variations. Firstly you need to know the focal length of your lens and the wider it is, the longer you can expose for without the stars becoming visibly blurred. Secondly, and very much related to the first point, you also need to know the crop factor of your camera’s sensor because this has an effect on your equivalent focal length. A full-frame camera has a crop factor of 1x, but APS-C sensors have either 1.5x or 1.6x depending on the manufacturer. Micro Four Thirds is becoming increasingly popular as well and these cameras have a 2x crop factor.

When deciding on what your maximum exposure time should be for point stars, you might also take into account how you will be viewing your final image. For example, if I was only showing my images in small resolutions on the web, I could get away with a small amount of trailing without it being noticeable. On the other hand, if I make large prints of my work, or they are featured as full-page shots in a magazine, then I would definitely have less tolerance. I think it’s fair to say though that most people will want to get the best possible result though, but if you are struggling with your particular gear setup then it might be that you can have a little leniency and nobody will really notice.

The ‘500 Rule’ is definitely more of a guideline than a rule because really there are no rules in photography. What this says though is that the maximum exposure time you can have before your starts start to become blurred is equal to 500/(your focal length in 35mm equivalent).

Now the shortness of this exposure time can catch people by surprise as I said before. If you have a crop sensor camera with a kit zoom lens on it that only has a max aperture of f3.5 or something like that, you’re going to be pushing your ISO up pretty high to get your exposure time down to 14 seconds. It’s, therefore, easier to shoot with wider lenses, and also a good reason for a full-frame camera which will allow the full field of view of a lens and also have a better high ISO performance.

When I was in Death Valley visiting the Racetrack Playa one night, I wanted to capture a cool photo of the 4×4 Jeep I’d rented to get up to the famous plateau with the moving rocks. In this shot, I chose an exposure time of 31 seconds but I had my lens set at 35mm on a full-frame camera. The 500 rule would way that I shouldn’t have my exposure longer than 500/35=14 seconds. As you can see from the 100% crop of the image, the stars have indeed begun to trail quite visibly in the photo. Not ideal! Hey, we all make mistakes…… that’s how we learn. In fact, the focus of this image is more on the vehicle than the night sky so in this instance, I almost got away with it. Had this been a shot entirely of the sky though, focussed on the intention of just showing the stars, this would have looked a lot worse.

For easy reference (and because nobody really likes to do the math), I created some handy charts that you can refer to. You’ll find a download link to get a PDF version of the chart that you can keep with you on your mobile device, or print out and keep in your camera bag. If you don’t need that, the charts are also displayed on this page.

The first chart features a large variety of focal length, as well as three different sensor sizes. Full frame 35mm as well as 1.5x and 1.6x crop factors to cover Canon, Nikon and Sony. A separate chart is provided for the 2x crop of Micro Four Thirds cameras.