How to Stack Canon Extenders 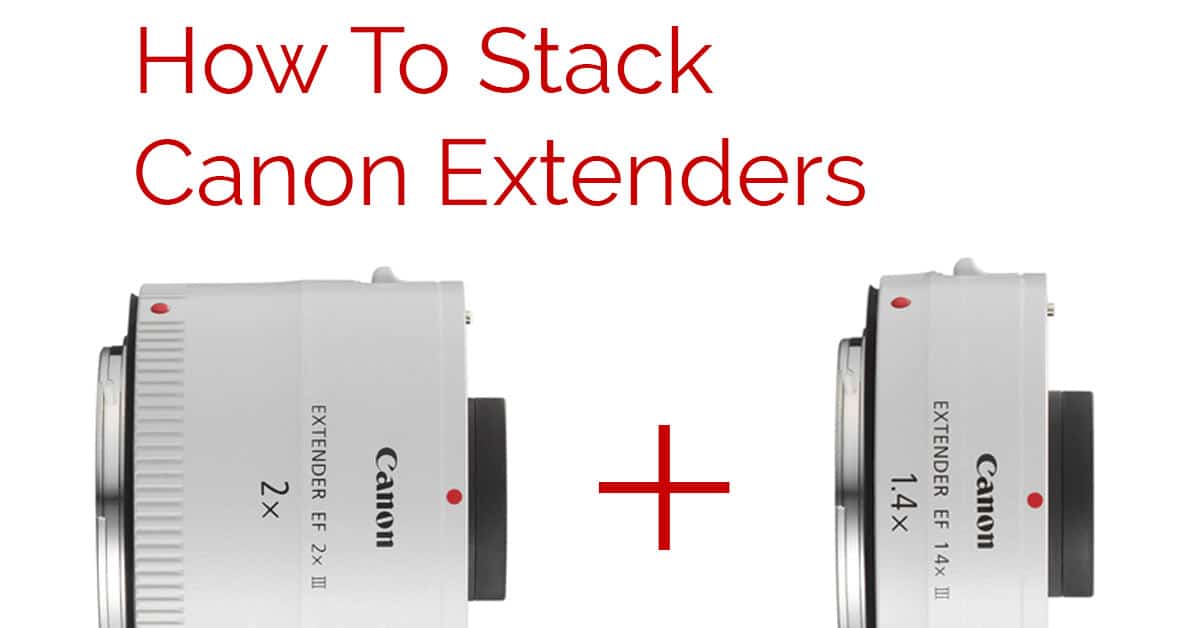 Firstly, if you aren’t familiar with the use of extenders, sometimes called teleconverters, I’d urge you to read my existing in-depth guide to using extenders for your photography. Extenders allow us to extend the focal length of compatible lenses, and they come in a variety of magnifications. For Canon lenses, they are available in 1.4x or 2x variations, and we’ll be focussing on extenders for Canon cameras in this particular article. Stacking extenders simply means using more than one of them simultaneously, and for Canon lenses the solution is quite simple. On the other hand, the solution for Nikon lenses is much more complicated and usually requires physical modification of the extenders with a metal file. Since I’m a Canon shooter, I can’t really demonstrate the Nikon method for you.

The vast majority of people looking to stack extenders are wildlife photographers who want to fill more of their frame with their subject. Extenders, if used correctly, can be a great way to get more reach from your lens, and get smaller, cheaper lenses up to the kind of focal length that might otherwise cost you over $10,000 if you were to buy a prime lens version. For example, using a 1.4x extender on a Canon 100-400mm f/4.5-5.6 L IS II gives you a good quality 560mm lens that costs about $2600 for the combo, whereas a 600mm lens would cost you closer to $12,000.

The problem is that there will always be occasions when something is still too far away for you to compose the shot exactly as you’d like to. It doesn’t matter if you start with a 200mm, or if you’re lucky enough to have one of the big guns like a 600mm! There will always be times when you’d wish to be a little closer. This is when stacking extenders can be a solution.

Complications and considerations of stacking extenders

In many cases this means that you’ll lose the ability to autofocus, or vastly decrease its potential, depending on which camera you are using. A lot of cameras can’t autofocus a lens when its maximum aperture is f/8, although though some, like the Canon 7D Mark II and 5D Mark III will give you a single, central AF point at f/8 or the central point with 4 surrounding points. At the time of writing this article, only the Canon 1D X Mark II has the ability to deliver full autofocus with a lens which has a max f/8 aperture. Even if your camera does allow for some form of autofocus with your final lens+stacked extender combination, the AF speed will be vastly decreased. In other words, you probably don’t want to try stacking extenders whilst shooting fast moving subjects like birds in flight, or race cars on a track.

The next consideration is that extenders do degrade the sharpness of a lens and add vignetting to the image at wider apertures, particularly when stacked. Your images will benefit from having the lens stopped down some way from the maximum aperture, but of course this eats up even more of your light which has to be compensated for by shutter speed or ISO. Long story a little bit shorter, you’ll probably find it hard to get a fast shutter speed with a stacked set of extenders, unless you are outside in the midday sun, so be prepared to choose your subject wisely, or crank up your ISO to a very high value even in daylight.

Any time you use an extension tube, you will lose the ability to focus to infinity, so the same goes for including one in a stack between two extenders. Whether or not this will make a difference to you is dependant on the lens that you are using, and also what kind of subject you are trying to shoot. I would hazard a guess that most people are stacking extenders to use on telephoto and super telephoto lenses to get “closer” to wildlife. I can’t speak for every situation, but this one seems the most relevant. Many of Canon’s super telephoto lenses are actually designed to focus past infinity, so the inclusion of an extension tube actually just brings the whole thing back roughly around the infinity mark. As an example, I stacked a 1.4x and a 2x extender on my Canon 400mm f/4 DO II, and pointed it down my street.  I was easily able to focus on the house at the end of my street, which was some 150-200ft away. In other words, whilst it might cause you to lose the ability to focus on an object on the horizon, I doubt that is what most people are trying to do with such lenses. Wildlife is typically MUCH closer than the house at the end of my street, so the loss of infinity focus makes no practical difference to me at all. Every lens will be slightly different, and please feel free to share your own combinations in the comments below, but my gut says that this won’t be a problem for most people.

Stacking extenders with an extension tube

An extension tubes looks a lot like an extender, but it doesn’t actually have any glass it in it at all. Its usual purpose is to alter the minimum focus distance of a lens by shifting it further away from the camera’s sensor. For the the purpose of coupling two extenders together though, it perfectly moves the protruding element just far enough away that two canon extenders can be stacked.

It’s worth noting that extenders can be purchased at various heights. Canon make a 12mm and a 25mm, but there are third-party versions in a variety of other sizes. For the purposes of stacking two Canon extenders together, you only need a 12mm extension tube, and this is what I would recommend that you use. Whilst extenders don’t alter the sharpness of an image, they do introduce a little vignetting and that increases the higher the extension tube you use. For this reason, if you have the choice, you should use the smallest extension tube you can for your stacking, which is the 12mm. Personally I use the Canon 12mm, but there are lots of good value third-party ones as well. The most commonly used third-party extension tubes are the Kenko tubes, and I’ve previously written a comparison between the Canon and Kenko extension tubes which you might want to check out as well.

Canon’s own Mark III extenders will need the extension tube in order to stack them together as we have seen, but some third-part extenders will stack together without using the intermediary extension tube. I’m a little loathe to state categorically that this can be done since I’ve not tried it myself, but it is widely reported that you can stack a Sigma EF 1.4x extender and a Sigma EF 2x extender together with no tube between them. I have also seen the same reported for Kenko extenders. I would say that if you plan to do this, make sure you either try it in a store first, have a store salesperson try it for you, or buy it from a place with a very good return policy like B&H Photo, just in case it doesn’t work as expected. I’d also caution that generally these third party extenders are thought to be good, but not as good as the Canon ones in terms of image quality. Since stacking extenders already puts a huge strain on image quality, if the results are very important to you then it would be best to use the highest quality extenders you can get, which are the proper Canon ones.

UPDATE: It has been pointed out to me in the comments that Canon’s Mark II extenders did actually stack together without need for an extension tube since the rear element of the 2x was recessed some way. For many of Canon’s latest long zooms and super telephoto lenses, the newer Mark III extenders provide some AF function improvements, so I would still recommend those for most people. If you happen to already own a Mark II extender though, you may not need the tube. A Mark II 2x and a Mark III 1.4x can be stacked without an extension tube as well, according to several other 3rd party sources that I researched. I have not tried it myself, so wield some caution….

This is a bit of a niche topic, and there’s not a huge amount of information out there about it. If you’ve done this yourself, and gotten good OR bad results, I’d love it if you could share your experiences below in the comments. What kind of extenders did you stack together?  Did they need the extension tube in the middle to space them out like the Canon ones? Join the conversation below!