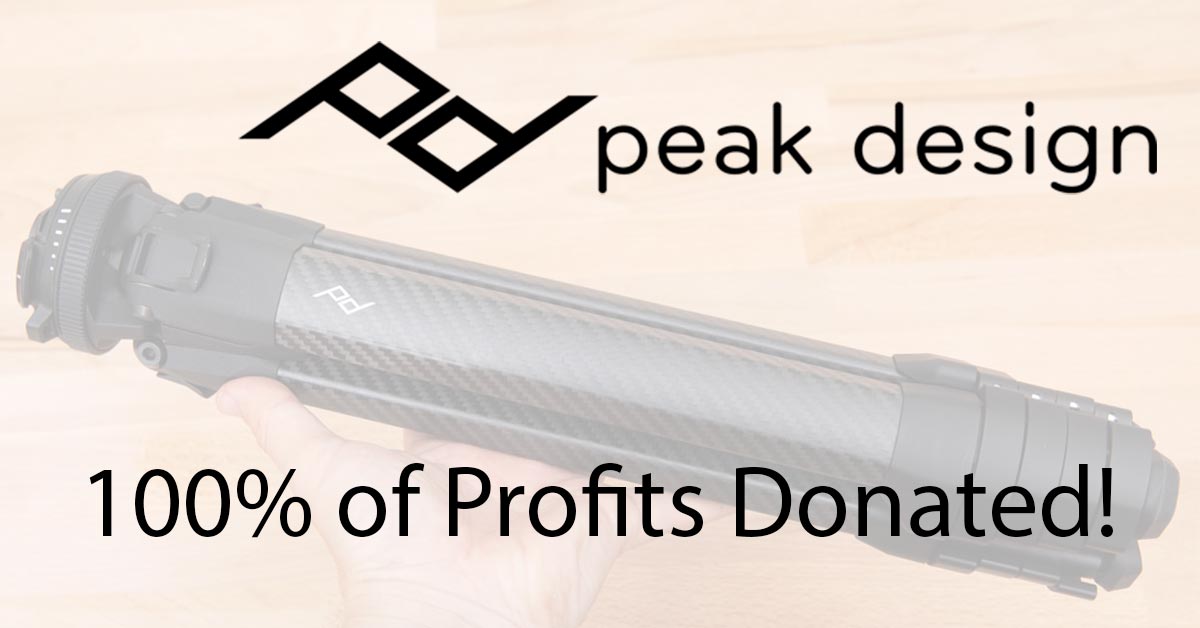 It feels like forever that I have been talking about the Peak Design Travel Tripod, but it’s finally available for purchase today! Yes, this is the tripod that raised over $12million on Kickstarter! While initial Kickstarter backers do have their tripods now, today is the first time that they are available for general purchase.

In an unprecedented move, Peak Design has committed to giving 100% of tripod profits from the first 5 days of sale, to coronavirus relief (the CDC Foundation) and to fighting climate change (Climate Neutral). Of course I don’t know exact numbers, but I do have a sense of the size of Peak Design’s operations from working with them for several years, and I can tell you this will be no small chunk of change. I’m genuinely blow away by the generosity of what they are doing here.

Tip of the hat and a golf clap to you, good people.

As you probably figured out, the ticking timer on this page is counting down the time remaining in which Peak Design will be donating the profits. So if you have been thinking about buying this tripod, whether it be the wallet-friendly aluminum one, or the snazzy mega-ultralight carbon one, now would really be the best time to do it. You’ll get one of the very best travel tripods on the market, and you’ll be helping to donate money to some excellent causes in a very difficult time.

Peak Design is donating 100% of profits from the sale of their Travel Tripod this week to COVID-19 and environmental relief. Click to Tweet

Review: What Do I Think Of The Tripod?

I was lucky enough to get a pre-production version of this tripod to take with me last summer on a 3000 mile road trip to the Arctic Ocean along the famed Dempster Highway. Along the way I stopped to hike in the Yukon’s sub-arctic Tombstone range, as well as numerous side hikes through the Arctic as I drove all the way from my home to dip my toes (and my dog) into the Arctic Ocean in Tuktoyaktuk.

Aside from it being a once-in-a-lifetime trip that I have been looking forward to for years, I was also excited to have the Peak Design Travel Tripod along for the journey because at that point it was rolling out on Kickstarter and well on its way to breaking records and raising over $12million.

For the Travel Tripod, the primary focus was to get the folded size of the tripod as small as possible, while still maintaining a 60 inch extended height, and the stability to hold a large DSLR. As you can see from the photos, the legs are not circular in their cross-section like every other tripod, thy are designed to close together tightly and almost wrap around the centre column which becomes hidden from view when you close the legs. It’s a neat design, and gives you one of those “why hasn’t anyone done this before” moments when you first get a closer look.

Aside from the seriously compact package, the next major feature is the built-in inverted tripod head. Looking at the photo above you’d hardly believe there is a head on this tripod, but that’s because it doesn’t fit with most peoples expectations of what a tripod head looks like. Again, the Peak Designers (see what I did there?) threw out the handbook when it comes to designing a tripod.

Once the column is extended an inch from the fully collapsed state, the knurled ring around the Arca-Swiss compatible head clamp can be loosened to adjust the head. Unlike a regular ball head that just has a clamp above the ball, the PD head essentially has everything above the ball, and this design has allowed them to hide the usually bulky ball amongst the architecture of the rest of the tripod.

If you have your own favourite ball head already, fear not, you can still attach it to the Travel Tripod as you would with any normal tripod by using their Universal Head Adapter accessory, but if you want to go ultra light, you have a very stable built-in head that was easily able to provide enough locking force to hold the pro DSLR setup that I was using during my testing period.

Overall, I was immensely impressed with this tripod. Of course it’s not as stable as a much heavier and larger 3-Series tripod from someone like Gitzo or RRS, but that wasn’t the goal. The goal here was to create something truly tiny that can be used for travel and landscape photography, and still extend to a height that will suit most people. Without a doubt they achieved this, and I wouldn’t hesitate to say that it’s one of the very best tripods on the market today.