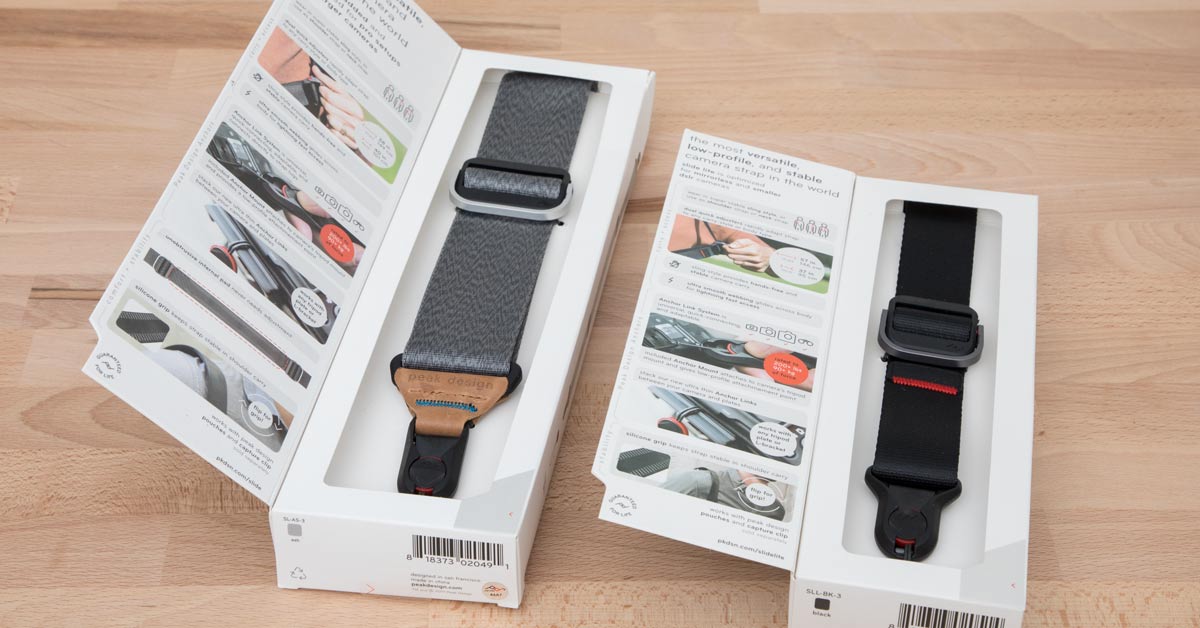 NOTE: Since writing this preview post, I have since written a full review of the Slide and Slide Lite straps.

These products were launched in a 5-day Kickstarter campaign that raised an incredible $1.4 million!

Now it’s time to take a look at the new versions of the Slide and Slide Lite camera straps that are also being launched with this campaign. Peak Design sent me a black Slide Lite, and an ash grey Slide strap so that I could take a closer look and show you guys the new features. Both straps are available in both of these colours.

The changes to the Slide and Slide Lite straps aren’t quite as sweeping as the changes to the Capture Clip and Pro Pad that I mentioned earlier. I would definitely call these more of a refinement, largely because they got them so right in the first place.

Firstly, these straps now come with a much smaller anchor mount to go on the bottom of the camera if you want to use that for one of the mount points. The previous versions of these straps included the camera plate from the Capture Clip which is fine if you actually use a Capture Clip, but overly bulky if you didn’t. This new low profile mount, with a 1/4 20 stud on it, is a much better idea.

The new straps also come with updated versions of the quick release anchors that were first seen with the Leash and Cuff redesigns done earlier this year.  These new anchors have much thinner cord on them which allows them to pass through smaller eyelets on cameras. They also have a slightly different shape to them which makes one-handed operation a little easier. They’re backwards compatible with all older anchor mounts on older straps though, no need to worry.

I used the original Slide and Slide Lites extensively and one of the things that happened over time was that creases would for in the shoulder padding area. Functionally it made no difference, but it did make them look a little old and worn. This issue has been addressed with the updates, and these new ones won’t crease around the silicone grip.

As I sat here comparing an old Slide to a new Slide today, the other thing that’s quite obvious to me is that the Slide mechanism has been updated, even though it looks the same on the outside. To quickly adjust the strap length on these straps you flip open the slide mechanism and pull on the handle. Now, when you go to re-engage the Slide mechanism to lock the strap length after adjustment, there is a much more positive “CLICK” as the latch is closed. On the old versions of the straps I commented in my original review that it seemed a bit loose and uncertain. That’s not the case with the new ones though. Now you get much more positive feedback from the mechanism that the whole thing is locked down and secured.

To the casual observer, these aren’t going to look that different from the original versions, but what Peak Design have done is fix the couple of small niggles that I used to have with them. These new ones are awesome!

The one possible negative for some people will be the mini anchor mounts. I think they’re cool, but they can’t be used to attach your camera to a tripod. The benefit of the old camera plate that came with the original ones was that they were Arca-Swiss compatible. It’s a case of not being able to please everyone I guess. Some people will be happy for the light and low profile addition, and some will miss getting the Arca-Swiss plate as part of the package. Of course the old plates still work if you have them, and you’ll be able to buy the new lower profile V3 plates as separate accessories too, or get one with the new V3 Capture Clip.

Black Vs. Ash Grey – Not Quite the Same material…

One other thing I want to mention is that the black straps and the ash grey ones aren’t made from quite the same material. There’s no mention of this from Peak Design themselves, but handling them, it’s very clear that the ash grey ones are considerably more supple than the black ones. No matter how I bent the grey one, it lies flat on a table, but the black one tends to try and expand and straighten itself out.

From a functional standpoint whilst carrying a camera, it makes zero difference, and you can’t feel the difference when they are hung around your neck. However, I will say that I prefer the feel of the grey strap in my hands a lot more, and if you were trying to coil up the strap to stuff it into your camera bag all the time, the grey one is a bit more submissive! The black strap, which is a bit stiffer, seems to want to fight back and escape!