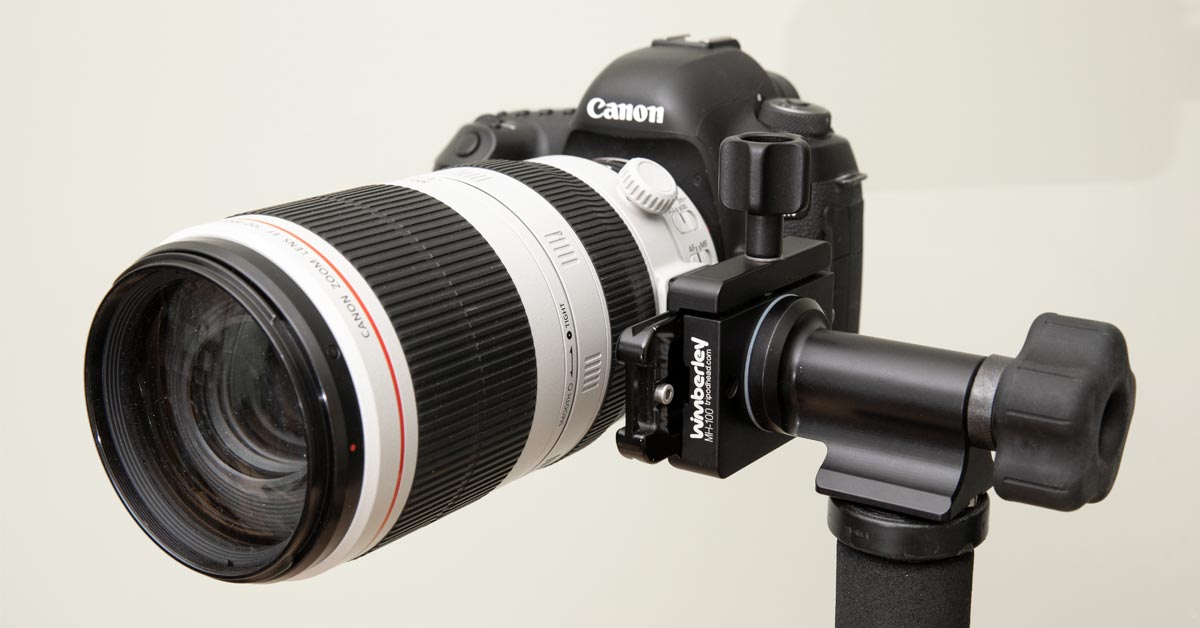 I get a lot of emails in my in-box about new products. A lot of them are immediately discarded, and some of them result in follow-ups from me asking whether I can borrow one to review. I didn’t ask Wimberley for a review sample of the MH-100 MonoGimbal, I rushed to the B&H website and simply purchased one immediately. I knew I wanted it!

The Wimberley MH-100 MonoGimbal is designed primarily as a gimbal for your monopod, although as I’ll demonstrate later in this review, you can actually expand that usage to even bigger things, too. What’s cool about this monopod head is that it looks and operates absolutely nothing like any other monopod head on the market right now, though I don’t doubt there will be copycat products at some point… I’m looking at you, Leofoto.

Ball heads are no good at all on monopods, they have too many axis of movement. If you were to try and use a ball head on a monopod, with a head that has a tripod collar, you’d find that the whole thing is a disaster when you loosen the ball lock knob. Everything just goes floppy and with one hand having to hold the monopod, you can’t accurately position and lock the camera at all. This means you need a specific monopod head that limits some range of motion when unlocked, and traditionally these have been built around a tilt head design. Sometimes these tilt heads also have a separate panning base built into them that has an independent locking knob. When a tilt head is unlocked it only allows the camera to tilt fore and aft, allowing you to angle your lens up and down. The left to right motion that you need to frame up a shot from a monopod is simply handled by rotating the monopod, and the left/right roll of the horizon in the image is handled by rotating the lens in the tripod collar. Note then that to use a monopod head effectively, you must be using it with a lens that has a tripod collar. The same can be said for both the traditional tilt head design, and this newer MonoGimbal design.

The problem with this traditional style of monopod head is that is has an almost infinitesimally small margin for error if you were to try and perfectly balance a camera and lens on top of it. To all intents and purposes it’s simply impossible because the pivot point is directly beneath the camera/lens setup. Like trying to balance a marble on top of a pin.

What this means is that when the tilt head knob is loosened with one hand, of you don’t have your other hand on the camera, the lens will either swing rapidly upwards or downwards, clouting either the camera or the lens on the monopod, as well as giving you a good heart-in-mouth moment while you hope you did the clamp up tight.

Holding the camera is a viable solution, and it has been for many years. That’s why a quick search on B&H for the term “monopod head” will turn up at least twenty different monopod heads that all look almost identical in design to the Acratech or RRS ones pictured above. But it turns out that there was a better solution all along, and the Wimberley MonoGimbal is it.

The side-mount design of the MonoGimbal allows you to easily slide slide your lens foot fore and aft in the screw-lock clamp until you reach the balancing point of your setup, at which point you can let go of your camera and it will sit in the same place, just as it would on a larger tripod gimbal head. There’s a lot more leeway with this design, too. If your lens balance is slightly off, it won’t come crashing down, it’ll simply rotate slowing upward or downward, allowing you to catch it gently with your hand or simply tighten the locking knob to prevent it going further.

Another benefit of this design over the traditional monopod head design is that the MonoGimbal locking knob also offers a degree of friction control on the fore/aft tilt. Anyone who used a traditional monopod head, even the pricey Really Right Stuff one, will know that the locking knob on those heads feels much more like an on/off switch. Not so with the MonoGimbal, which gives you some adjustable rotational friction instead.

Initially the side-mount position of the lens and camera looks a bit weird and awkward. When it comes to using this setup, you’ll have to counteract the position of the lens by tilting the monopod very slightly in the opposite direction. This sounds like a bit of a pain, but I found that you actually end up doing it subconsciously, and the necessary tilt in the opposite direction is not nearly as much as you might imagine is necessary. In the end it becomes a non issue. You can easily stand around for hours with this setup and not feel fatigued by its use.

Attaching the MH-100 MonoGimbal to your monopod

The MonoGimbal has a 3/8-16 threaded hole on the bottom, allowing you to attach it natively to any monopod that has a 3/8-16 stud on the top. Alternatively you can install a reducer bushing into the 3/8-16 hole to allow you to mount it onto a 1/4-20 stud. If it’s going to be a permanent accessory, I’d recommend a little blue Loctite to keep things fixed in place. The base of the head is also an Arca dovetail itself, so another alternative is to put an Arca quick-release clamp on the top of your monopod and then clamp the MonoGimbal into that. The benefit of this setup is that the head can be removed quickly and put in your bag to prevent damage, or you could remove it and clamp things directly to the monopod when you feel the gimbal is not necessary. At the moment I have mine attached directly, but I’m considering going to a quick-release solution soon for protective purposes.

The name of the product does suggest the the MonoGimbal was intended for monopod use only, but the dovetail on the base also makes it very easy to clamp onto a ball head and you could certainly use it this way if you didn’t want to carry a larger gimbal with you. I love my big tripod gimbal (I use the RRS PG-02), but there’s no denying that it’s a big heavy beast and on trips where I want both a gimbal and a ball head the combined weight starts to become an issue. I can definitely see myself packing the MonoGimbal and a ball head on trips where I really want to save some weight.

A word of warning, though. If you do experiment with this setup, you need to be very careful, and I would recommend having a hand on the tripod at all times. If you rotate the ball head on its pan base, with the lens hanging off the side on the MonoGimbal, you will alternately go through angles where the setup is very stable when the camera is directly above an outstretched tripod leg, and then considerably less stable when it is between two tripod legs. If you are using the very heaviest setups such as a pro-sized camera and a 600mm lens, it could very well be enough weight to tip the tripod over in this configuration. You have been warned! It’ll save you some weight, but you’ll need to be more vigilant.

I’m sure you have realized by now that I love this thing. It has reinvigorated my love for using a monopod, and I simply won’t pack a camera bag without it now. It has made using a monopod a viable solution in many situations where I previously would have needed to carry a much larger tripod with a heavier traditional gimbal head. If you had told me that my favourite accessory of the year would be a monopod head, I wouldn’t have believed you because I simply would have imagined a head with the more traditional tilting design!

I know this head has been selling like crazy for Wimberley, and they absolutely deserve all the praise they are getting for thinking outside the box and producing something that is so simple, yet so effective. And also for doing it so beautifully at such a reasonable price point.

The Wimberley MonoGimbal is available from: