Embracing the Unexpected – Travel with a Camera and an Open Mind

At the end of summer 2013 I found myself in Cambodia after trips to Hong Kong and Thailand.  Having never been to Cambodia before I started off, as many people do, in Siem Riep amongst the famous ruins of the Angkor Wat heritage centre. A mind-boggling expanse of ancient temples from a variety of religions that stretch as far as the eye can see and date back to the first half of the 12th century.  The experience of exploring those temples was beyond anything I had ever imagined.  The scale of the site and the size of the temples within it was breathtaking, truly one of the great places on this planet to take photos.

Since I had a few weeks in Cambodia I also wanted to take some time to explore a little further afield.  Siem Riep and its surroundings are incredible, but there’s no escaping the crowds of other tourists.  In my research for my trip I came across a tour company called Peace Of Angkor, run by a British ex-pat who had led photography tours all over Cambodia for many years.  A quick chat with Dave Perkes, the owner of the tour company, and I was quickly sold on a trip with him in a 4×4 up to the northern border with Thailand to explore some of the lesser visited temples from the same era as those in Siem Riep.  This post isn’t about the trip specifically, just about the first morning….

As soon as you leave the bustling city of Siem Reap it doesn’t take long to get into the “real” Cambodia.  Vast expanses of rice paddies stretch to the horizon and paved roads quickly turn to muddy un-graded tracks, it was immediately apparent why a 4×4 was going to be a necessity for this trip.  We hadn’t driven for more than a few hours towards our first destination of Banty Chmmar though when we got a flat tire whilst passing through a small village.  Whilst we had a spare, it was decided that we shouldn’t venture further north without fixing the flat while we were still relatively close to civilization.  Savin, our translator, quickly hopped on a passing scooter and set off to find a place that could fix the flat and we were left with a couple of hours to kill.  I grabbed my camera (a Canon 5D Mark 3 with a 24-70 f/2.8 L II) and wandered off with one of the guides to explore the village that had forcefully become our first destination.

Turning down a back alley we were quickly greeted by a group of Cambodian guys stood around a fire in what appeared to be some sort of wood working studio, though I use the term “studio” very loosely.  I don’t speak Khmer, at least not past the usual please and thank yous, but it was clear that they were both surprised to see us and very intent on getting us to come and meet them.  “Uh oh” muttered my guide, Elliot. “We’re about to go drinking”.  Had I been wearing a watch at this point I probably would have looked at it to emphasize my first thought, it was only about 10am!  They beckoned us to join them around the fire and sure enough, not ten seconds after the friendly faces extended their hands to welcome us, a bottle of questionable liquid was produced along with some homemade shot glasses.  I guess we’re drinking then!

It’s worth noting at this point as well that I’m not a big drinker at all, in fact it’s a real rarity.  When I travel though I’m a firm believer that there is far more to experience than what you can see with your eyes and record with your camera.  I like to immerse myself in the culture of a country and that means, as far as possible, eating and drinking whatever it is that the locals are enjoying.  Little did I realize that this philosophy was about to be put to the test, big time!

Learning To Count To Three

“Moi, Bpee, Bai” was shouted with increasing enthusiasm as the shot glass (the bottom of a plastic bottle) was handed around the group of Cambodians and two increasingly sweaty looking white guys.  “It means 1,2,3” explained Elliot, but I wished they counted a lot higher as this clearly homemade concoction had a kick to it that seemed to call for at least a 6 or 7 second preparation. What we were drinking was of course rice whiskey and it wasn’t a particularly good vintage.  To add some flavour to it they would slowly add thin slices of banana which would stay for eternity in the bottle to ferment and add both to the taste and the alcoholic content.  We finished bottle number one in about 4 minutes.  Some hand signals were exchanged and Elliot took off with one of the younger guys to buy some more whiskey and cigarettes.  I think I gave him about $10US but a pack of cigarettes for the guys and several more 2 litre bottles of Whiskey totalled only $3.  Welcome to rural Cambodia!

Having polished off their drinks supply momentarily, they decided that it was time to eat and I was enthusiastically shown several items on that day’s menu.  I nodded my head to each one of the fly-covered options that sat out in the 40 degree heat and hoped that the alcohol content of the incoming whiskey re-stock was going to be enough to neutralize whatever my stomach might think about disagreeing with.  On the menu that day we had congealed pigs blood, stuffed intestines of unknown origin, pork belly and prahok which is fish fermented in a bucket in the sunshine.

At this point Elliot hadn’t yet returned with the new alcohol supply and we were already digging into the pig fat and prahok by the time he did.  It seemed customary to tear off a piece of the pig belly and then wipe it though the bowl of prahok with your fingers, no cutlery needed.  It tasted amazing, I kid you not.  In fact it was only when Elliot finally showed up again that he explained to me exactly what I was eating.  Had he done so before I’d tried it I certainly would have approached with a bit more caution but ultimately I’m sure it would have gone down the same way and I was feeling like I really needed to soak up some of this alcohol.

With the fresh alcohol having arrived, some sheets of wood were quickly laid out on the floor and a few more family members started to appear from the house nearby to join us.  The stuffed intestines, prahok and pigs blood were laid out in the centre of the circle and the shot glass was passed continuously around the circle as we quickly polished off another bottle of whiskey…. and then another….. and anot…..

By now it was probably 10:45am and I was beginning to appreciate the benefits of only having to count to three before taking the whiskey shot.  Counting higher than that was starting to become a little tricky but the bottle kept moving and the incredible spread of food was soon devoured.  It’s memories like these that will live with me forever.  I took a few photos that morning but for the most part I put the camera down and just let the experience wash over me.  Knowing only a handful of words in Khmer we had now drunk and eaten with a group of total strangers in their home for over an hour, all because we got a flat tire and happened to walk past their yard.  For many people getting a flat would have been marked as the low point of their adventure but because we embraced the unexpected, grabbed our cameras and set out to explore, it became one of the absolute highlights of my time in Cambodia.  This group of guys embodied everything I saw about the people of that beautiful country; happy and welcoming beyond belief.  A truly remarkable place that should be on everybody’s list to visit.

I’m not going to lie, the line we walked on our way back to the car was far from straight that morning. Thankfully neither of us were the designated driver! 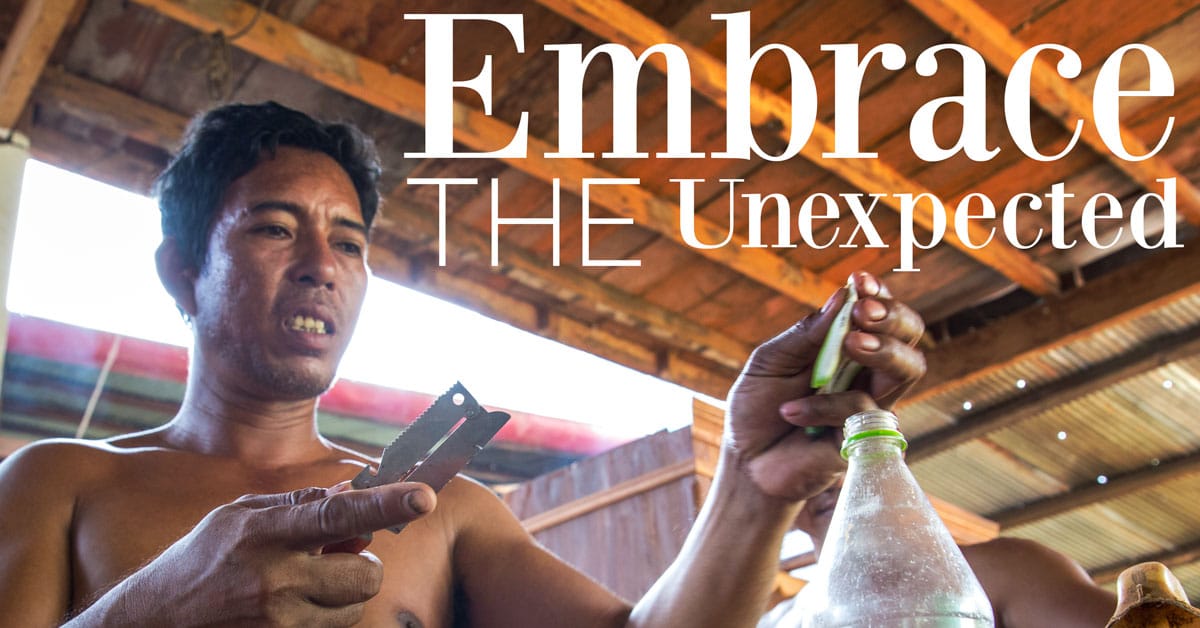