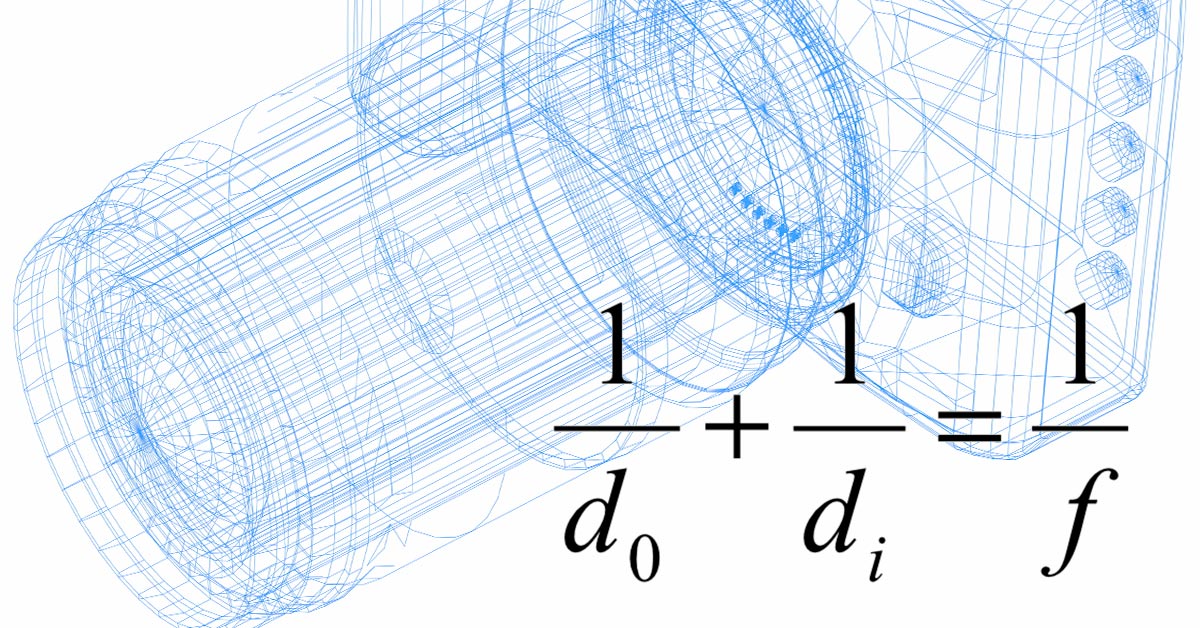 I recently received a comment on my popular article – The Ultimate Guide to Extension Tubes – which asked how you would go about calculating the new MFD (minimum focus distance) of a lens, once you have added an extension tube. In that original post I did include the mathematics for calculating the new maximum magnification of a lens with an extension tube, but at the time I decided not to dig deeper and explore the calculation of the new MFD itself, since the math is a little longer. The new comment reminded me about it, so I decided to write this new post to explore it and do an example and a test based around real world lens measurements.

By this point I probably don’t need to tell you this but: Nerdy optical math stuff is coming! Some of you love it, some of you don’t 😉 You have been warned.

If you really want to know exactly what your new MFD is, the best way is still to put the extension tube on the lens and move an object closer to the camera until it can no longer focus, them simply measure that distance. MFD is measured to the focal plane of the camera (sensor) and not the front of the lens.

Of course this means that you already need to own the extension tube, and I can see a reason why people would want this information prior to making the purchase. Most likely, you would be trying to decide whether to buy a 12mm extension, or a 25mm extension if you already had a pretty good idea about the kind of subjects you want to photograph, and how close you might be able to get to them.

The problem is that all lenses are designed very differently, and all the mathematics behind these things has to rely on the thin lens equation. This equation has to assume that a lens is comprised of a single element, and also that the lens element itself is “thin”, in other words the distance that light travels through the lens isn’t taken into account, and neither are optical effects due to the thickness. In photographic lenses neither of these assumptions are true, so the only answers we can come up with are simply best guesses. It also can’t take into account the fact that lens elements shift within a lens as you focus it, so you’re basically working with an unknown moving target. The only way to get truly perfect results would be by physical experimentation as I described in the first paragraph of this sub-section. As long as you keep that in mind though, we can still get some useful results. What I’m going to do here is demonstrate the theoretical change in MFD of a lens using an extension tube, and then I’ll measure it physically with my own copies of the lens so that we can examine how much the theoretical results might differ from the real world MFD.

This was covered in the aforementioned extension tube guide, but for those that haven’t read that one, it’s important to get the whole picture, so we’ll start here.

You’ll need to start with with magnification of your lens, which can be found in the lens specifications that are listed on the manufacturers website.

If you did the trigonometry on the triangles in the diagram, you’d see that much of it cancels out and reveals that (hi/ho) is also equal to -(di/do). The negative value comes from the image being flipped upside down, but essentially this can be ignored in real life since sensors are installed upside down in the camera to overcome this.

How to Calculate Change in MFD

Now we have two equations, the thin lens equation and the magnification equation, that have some common terms in them. We also need to remember that when a lens is focussed at its absolute minimum focus distance, MFD = di + do which hopefully should be clear from the diagram, and what was mentioned earlier about MFD being the distance to the camera’s sensor and NOT the distance to the front of the lens.

This actually gives us everything we need to calculate the new MFD of a lens that is using an extension tube, so let’s take a look at an example.

Using our previous formula for change in magnification, we can calculate that the new magnification of the 50mm lens + 25mm extension tube is (0.21 + (25/50)) = 0.71. This is the first stepping stone to figuring out the new MFD of this lens+extension tube combination.

We need to find both di and do so that we can add them together to get our new MFD.

Now all we have to do is solve for do.

So the Canon 50mm f/1.8 STM lens has a native MFD of 350mm, but if you add a 25mm extension tube to it then you’ll be (theoretically) able to focus down as close as 206mm. That’s a pretty big improvement!

I wanted to include the above example from the beginning so that we can see how we got to the answer, but the whole process can also be represented with the following equations:

Where f = focal length, e=extension tube length, m=native lens magnification without the extension tube and di and do are distance to image and distance to object as we have become familiar with already. If you have an easier way to simplify this, I’m all ears, just leave a comment at the bottom of the page.

As I mentioned earlier in the post, this math has to make some pretty big assumptions so it’s not going to give us a perfectly accurate result, but how far off are we? I own a 25mm extension tube at the Canon 50mm STM lens, and in my physical testing I was able to focus down to 204mm which is only a 1% variation from the theoretical value. I was expecting it to be more than that, but this is likely down to the relative simplicity of the “nifty fifty” lens. I expected more complex lens designs with more elements in them, such as a 24-70 f/2.8 to exhibit more of a difference.

The Canon 24-70 f/2.8 L II has an MFD of 380mm and a native magnification of 0.21. With a 25mm extension tube, this magnification would become 0.57, and if we plug all that into the previous math that we did, we get a new MFD of 303mm for this lens with the extension tube. In real world testing though, I was able to focus the 24-70 f/2.8 L II down to 237mm with the 25mm extension tube. That’s a pretty dramatic 28% variation from the theoretical value, so you definitely need to be careful when making assumptions with complex zoom lens designs.

I’m fairly sure of the mathematics in this article, but with complex subjects like this there’s always the possibility for a small mistake. If you spot something that isn’t quite right, please leave a comment below. If you do your own real world testing of an extender/lens combination, please also leave the data in a comment!