Home » Opinion Pieces » Follow-Up: My Switch to Sony – This Is Not Why I Did It

Follow-Up: My Switch to Sony – This Is Not Why I Did It 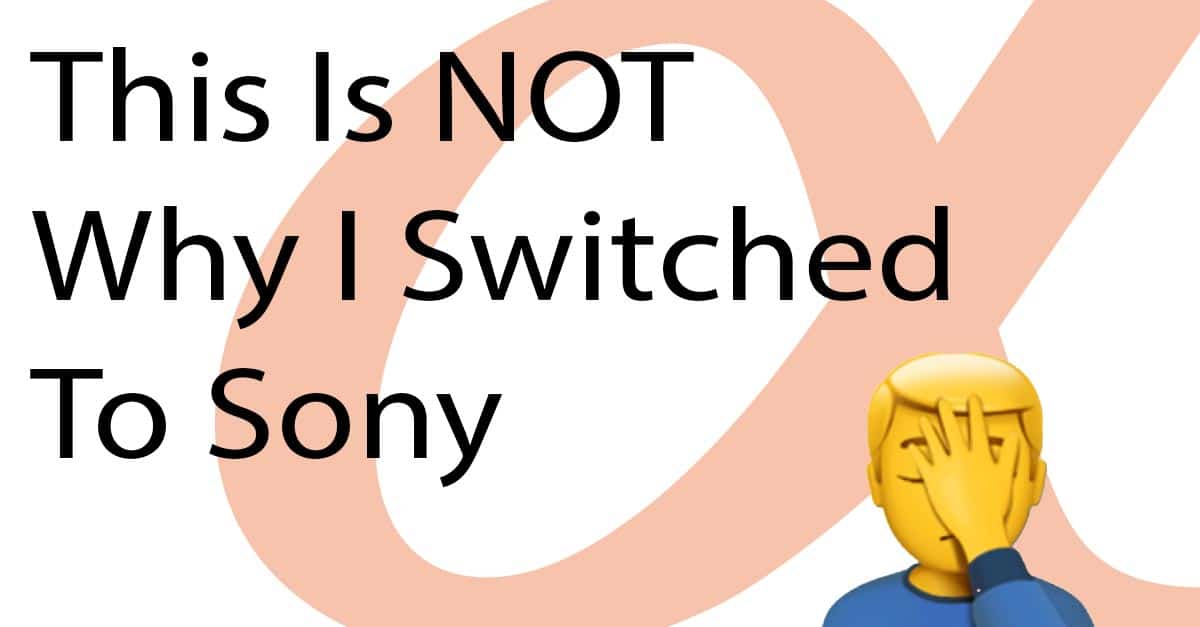 This is a direct follow-up to my original article: Why I Switched From Canon To Sony. If you haven’t already done so, it’d probably be a good idea to read that first.

I knew my move from Canon to Sony would cause a bit of a stir and provoke a few questions. What I wasn’t prepared for were the abusive emails, with people lashing out and calling me things like “a f*&^ing idiot”. The world is a strange place! I’m not trying to force people to move in one direction or another with their own camera gear, merely laying out the facts and story behind my own decision.

It wasn’t all bad, though. In fact, many more people messaged, emailed or left comments that were supportive and thanked me for my frank discussion of the topic. A surprisingly large number of people also said things along the lines of “yes, I made the same switch myself a few months ago.” Fascinating stuff.

After answering all the questions and messages, though, I found that I was often repeating myself and several common themes were emerging. In this follow-up, I’m going to address those particular topics in more detail.

First a very quick one: No, this doesn’t mean I’ll stop covering Canon on the site.

There was some disappointment from Canon folks that it might signal the end of Canon content on the site. That’s not the case at all. Whilst I did sell all my Canon DSLR gear, I kept my EOS RP mirrorless camera for the purposes of reviewing Canon’s newest RF lenses. Later in the year, I will probably purchase an EOS R5 or R6 to replace the RP and give me a higher resolution camera for testing the lenses. I currently have several RF lens reviews in progress. I’m now using Sony as my primary work system, but I will continue to bring Canon content to the site.

The second point I want to discuss deserves its own sub-heading.

NOT Why I Switched To Sony

I’m paraphrasing and summarizing here, but many comments I received were along the lines of:

It’s not the camera, it’s the photographer.

I think these two common threads can be rolled up into one discussion, so here it goes…

Firstly, I want to make it totally clear that I never said I was switching to Sony so that I could take better photos. Anyone that switches their camera brand allegiance for that reason is on a fool’s errand. The only way to improve your photography and “take better photos” is by putting in the time and exploring the art through a combination of experimentation, practice, peer evaluation, self-critique and learning, whether that be at an academic institution, or simply consuming educational content through print or digital mediums.

Everyone responds to different teaching methods and environments in different ways, and you are most likely the best judge of what will work for you. Experimentation, self-critique and long periods of contemplation about my artistic failures are the things that seem to best fuel my own improvements, but perhaps you are different. One thing I can assure you is that your photos won’t improve by buying a new camera or switching to an entirely different camera brand.

I realize that this is exactly what people were telling me in their emails and comments, which is great because it means I have a lot of smart readers! But somehow the glaring bold headline of my Sony switch had seemingly overshadowed the reasons behind it. Perhaps some of those comments were instant reactions from people that didn’t read the original article, but whatever the reason, it’s something I felt needed to be addressed so that people don’t blindly follow this path hoping to find photographic improvement.

So if I didn’t make the switch to improve my photography, why did I do it?

The answer is actually quite simple: I switched so that I could create more of the images that I envisage.

If you don’t consider this statement carefully you might misunderstand it and confuse it with a desire to take better photos, but that is definitely not what I’m saying, and this is where we get into the second theme of the comments: “It’s not the camera, it’s the photographer.”

This, I’m sure, is a phrase we are all familiar with, and whilst I don’t know who said it originally, I can’t imagine that they meant it to be taken 100% literally. Contained within that short phrase is the sentiment that photography is an art, and it’s something that requires a great amount of patience, practice, learning, failure, artistic forethought and technique, among many other things. And you know what? It also requires a camera of some sort.

But saying all of that isn’t quite as neat, or quite as perfect a soundbite as simply saying “It’s not the camera, it’s the photographer.”

Here’s the important bit: I agree that you can create photos with any camera, and I agree that you can create art with any camera, but can you really create any photographic art with any camera? No, you can’t. You are dealing with a piece of technology, and that means there will always be technical constraints. Perhaps your chosen style of photography doesn’t bump up against those constraints, but it doesn’t mean that other people’s don’t. A more accurate statement would be that it’s 90% the photographer and 10% the camera, but again that doesn’t quite have the same ring to it, does it?

What if you are given a black and white film camera, but the photos you envisage making are full of bright colours? Yes, a good photographer can make beautiful photos with a black and white camera, and they may even be beautiful photos of the very same subject that they envisaged photographing in full colour, but they won’t be exactly the photos that they envisaged, and they will likely feel creatively constrained by that.

To give you another example, let’s say you are a bird photographer and you visit a beautiful location full of soaring birds of prey, but all you have is as an instant film camera with a fixed lens and basic exposure controls. Sure, a good photographer will know how to work with those limitations and still come back with some compelling images, in fact, such a situation, when self-imposed, can be a great creative exercise. But it’s more than likely that the photographer will feel the constraint, and not be able to capture all of the images that they might have envisaged before embarking on that trip.

If you had the option to remove some of the constraints and create more of the images that you can envisage, you’d take it, wouldn’t you?

When shooting wildlife with my old Canon DSLR gear I could do all my research to put myself in the right place at the right time. I could put my years of experience into practice and choose the perfect exposure for the light and environment, and I could leverage the knowledge of the artistic craft to choose a compelling composition that suited my style. I could even leverage knowledge gained from years of dealing with less-than-ideal tendencies of a specific piece of equipment, in order to try and give it the best chance of getting the shot. In short, I could do my 90% of the equation, as it were.

But if the camera decides to hunt for focus at the critical moment, I don’t get the shot I envisaged. Perhaps I get a similar, but not quite as good shot a moment later, but more than likely I get no shot at all.

In my case, the desire to switch from Canon to Sony was primarily fuelled by the desire to have a faster and more accurate focus system. With my wildlife photography, if everything else remains the same during my 90% of the procedure, I believe the Sony camera will more often complete its 10% of the equation successfully, and the result is that I will create more of the images I have envisaged. I will stare less often, forlornly, at almost-perfect images in Lightroom that are great in every way apart from the fact that the camera front focused or back focused at the critical moment. That is why I switched to Sony.

It’s very possible that the type of photography you enjoy is not as greatly affected by technology differences between different camera brands, or perhaps the medium in which you display your images would simply never reveal these differences. If that’s the case, great! Photography probably isn’t going to be as expensive an exploit as it has been for me 🙂

If you only post your photos to Instagram and edit them on your phone, the improved high ISO performance or expanded dynamic range of a specific camera brand or model isn’t going to make the slightest bit of difference to you. If you only shoot landscape images, the speed of the latest CFexpress cards probably isn’t something that’s even on your radar, and if you shoot macro photos of fruit in bowls, I’m sure you don’t care whether your camera shoots 3 or 20 frames per second.

If your camera, your tool, doesn’t limit the creation of what you envisage, be thankful. But don’t be naive and blind to the fact that some people do have legitimate reasons to upgrade or change their equipment with the hope that it will remove some barrier to their own creative vision. Not to mention the fact that sometimes there is a business behind the photography you are looking at online. For me, less camera-based failures in the field mean more work completed in less time. Out of focus shots don’t make me any money.

This is why I switched to Sony.