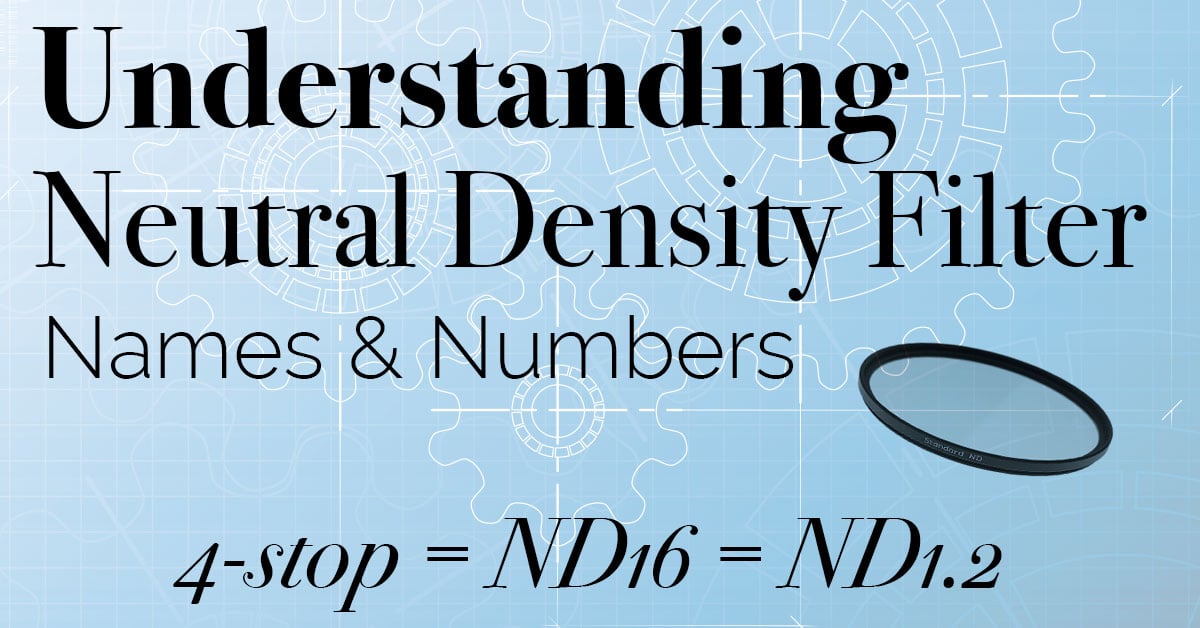 I was doing some research for an upcoming guide to long exposure photography, and I was struck by how differently the various filter manufacturers name their neutral density (ND) filters. I had a long phone conversation about filters with a friend this week, and the terminology differences also caused some confusion there as well.

Some manufacturers label their filters using what is called the Optical Density of the filter, whereas some of them use what’s known as the Filter Factor.

The confusion arises because with these smaller filter factor numbers (2,4,8,16), people confuse them the with the reduction of light in f-stops. When they see ND2 on a filter, they think it is a 2-stop ND filter, but actually it’s a 1-stop filter.  Similarly, a filter that has ND16 written on the side of it is actually a 4-stop filter and not a 16-stop filter.  Please refer to the table above for a full list of common filter factors.

The transmittance number is actually very rarely mentioned on a filter itself, but you might see it mentioned on some packaging. The reason I included it in the reference table is really because I find it’s just a good visual representation of the light that gets cut by neutral density filters.  To many people, when I tell them that a 6-stop ND filter only lets in 1.56% of the light, it’s instantly easier for them to visualize the result of that, as opposed to me just saying it has a filter factor of 64.  The % Transmittance also comes into play if you want to mathematically calculate the optical density.

Being the kind of photo nerd that I am, and also an engineer in a past existence,  I couldn’t just trust that these numbers mean what they do, and simply put them into the reference table verbatim! So of course I looked a little deeper and found out how these numbers are achieved.

The formula relating to optical density is: Fractional Transmittance = 10-d

But we also know that % transmittance = (100/Filter Factor)

Additionally, where X is the light reduction in f-stops, we know from the earlier section that Filter Factor is = 2x

If you simplify all the stuff in the brackets on the right, you are actually just left with 2x

Using this equation we can work out the optical density number using the reduction of light in f-stops.

Now you know this optical density number it is simply the Log of the factor by which light is decreased!

Ok, ok… don’t worry, there’s no need to actually remember all that mathematical stuff.  All you really need to know is what is in the table above. I just put all the math there for the small minority that might be curious about it, so please don’t let it scare you off. Neutral density filters are a really important thing for photographers, so it is important to know which ones are which, but you can just use the table to memorize the relationships and names.

Hopefully you guys find this useful and it clears up a few things about the naming of neutral density filters.