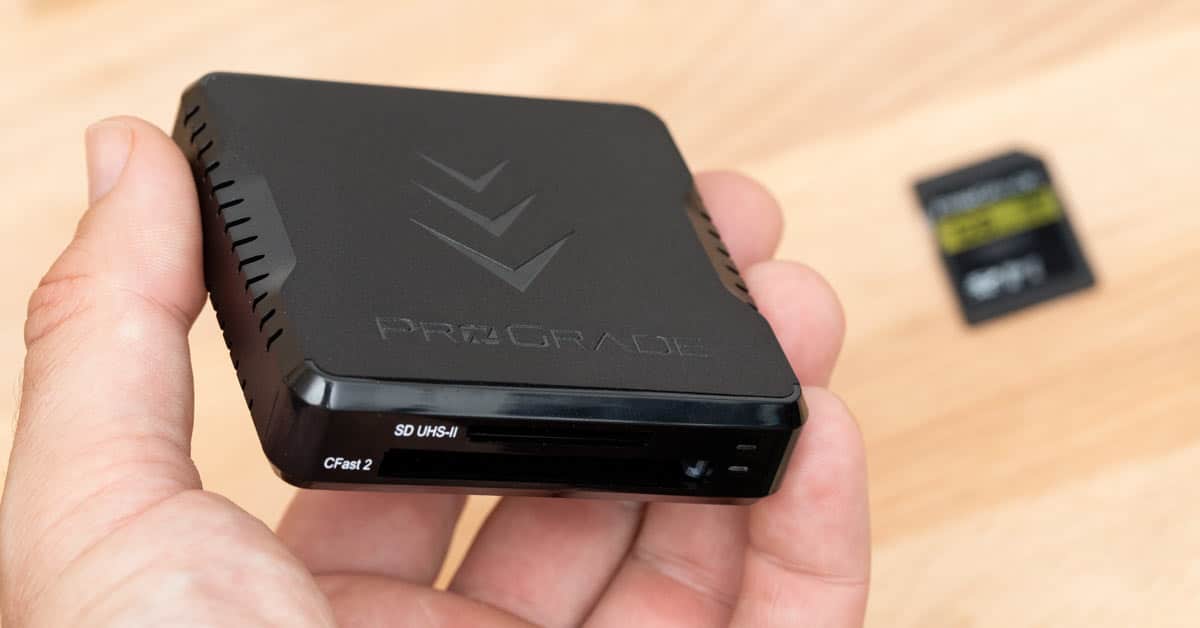 ProGrade Digital is a relative newcomer to the photography world, having launched to the public in early 2018 with their first series of SD and CFast cards, as well as the dual-slot SD+CFast card reader that we’ll be taking a look at today. When Lexar’s parent company, Micron, sold the Lexar brand to china-based Longsys, several members of Lexar’s management and technical team moved on and started ProGrade Digitial. So whilst the company is currently in its infancy, the team behind it has over 60 years of experience working in the consumer memory card business for people like Lexar and SanDisk.

Having spoken recently to the CEO of ProGrade Digital, Wes Brewer, I’ll definitely be keeping a close eye on this company. In fact, I’m already a customer myself, having purchased a pair of their new 128GB V60 SDXC memory cards. After chatting to Wes and experiencing their new products, it’s clear that this is a company who is putting an emphasis on the higher end of the consumer market. Quality, reliability, support and service are high priorities for them, as well as being at the forefront of emerging technologies such as the new CFexpress format.

So, ProGrade Digital pitch themselves as the solution for professionals, but do their products stand up to this? Let’s find out…

The SD+CFast reader that’s reviewed here was the first card reader from ProGrade. They have subsequently released addition card readers, including a dual-slot MicroSD reader and an SD+Compact Flash reader. These addition card readers are designed in the same way as the original SD-CFast reader, so most of this review will be relevant to those ones as well. Particularly overall design, quality of product and connectivity options. 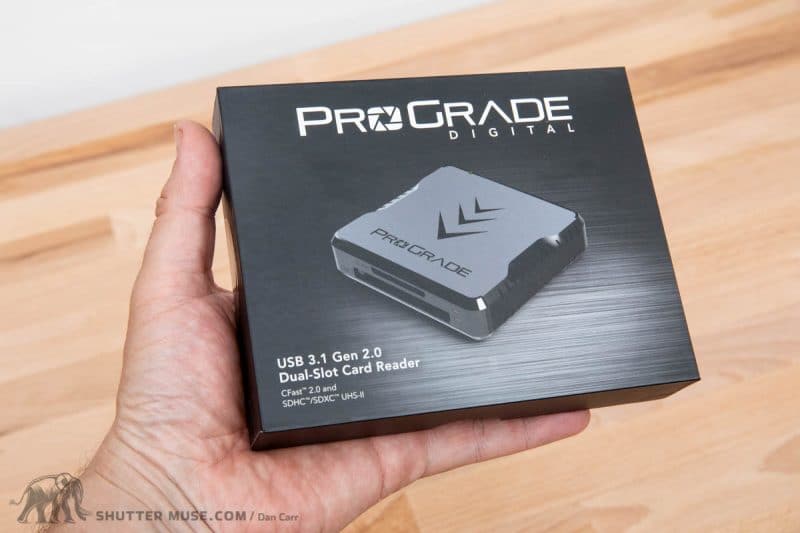 Most, if not all memory card readers I’ve purchased in the past have either come in cheap plastic packaging that you need to hack into with a knife, or forgettable flimsy cardboard wrapping. This is not the case with the Dual-Slot Card Reader which is delivered in a solid, beautifully designed, satin-finish cardboard box. Initial impressions and the unboxing experience were clearly considered in the packaging design, and anyone who has opened an Apple product will have some idea as to what to expect here. I know most people will probably throw the box away and never see it again, but it’s a nice touch that definitely sets them apart right away. That’s good, because at $79 this is a very expensive card reader compared to competition such as the Lexar SR2 readers. 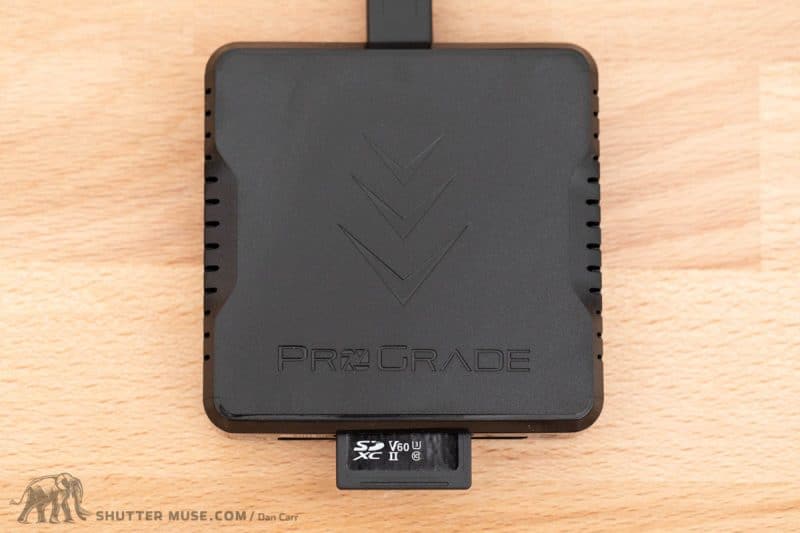 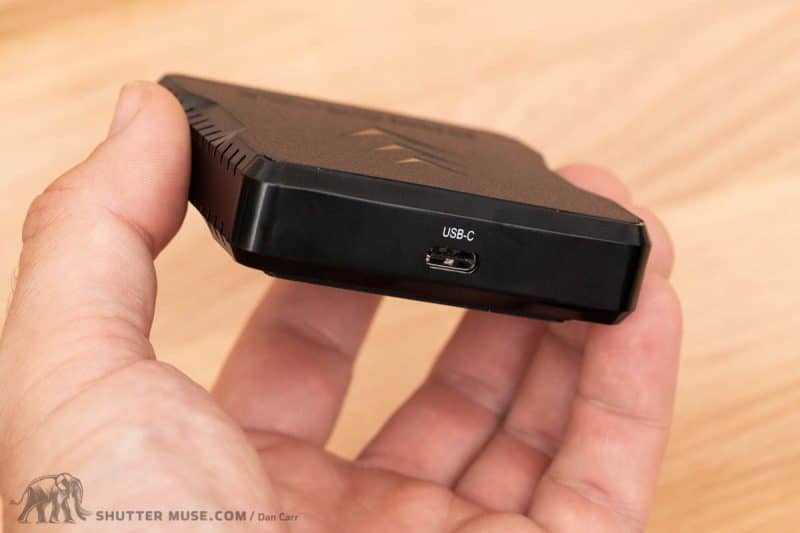 In theory the USB 3.1 Gen. 2 interface is capable of delivering transfer speeds of 1.25GB/second, but since that vastly exceeds the speeds that current generation memory cards are cable of, I don’t expect to see anything like that kind of speed in my own testing. ProGrade Digital have already previewed a 1TB CFexpress card that can reach speeds of 1.4GB/second though, so perhaps these sorts of data bottlenecks won’t exist for too much longer! For now though, I’m still pleased to see that this reader certainly features the latest and greatest connection technology so you can buy with confidence and know that it’ll be relevant for many years to come. The Type-C USB interface is certainly the future, and in the past year or so I have been making a personal effort to only buy products that now feature this connection type. Everything else will have a shorter shelf life, or require an annoying collection of dongles!

One of the unique things about ProGrade Digital’s reader is that it comes with a sticky metal plate, and includes a magnet in the base of the unit. For laptop users this allows you to mount the reader on the back of your screen as shown in the photo below, and I’m sure desktop users could to the same thing. I’ve seen this trick done with velcro many times before in busy media rooms full of photographers, where desk space is often at a premium. I think it’s an awesome idea that they built this into the product as a feature, and also a smart marketing move with the branded metal plate. 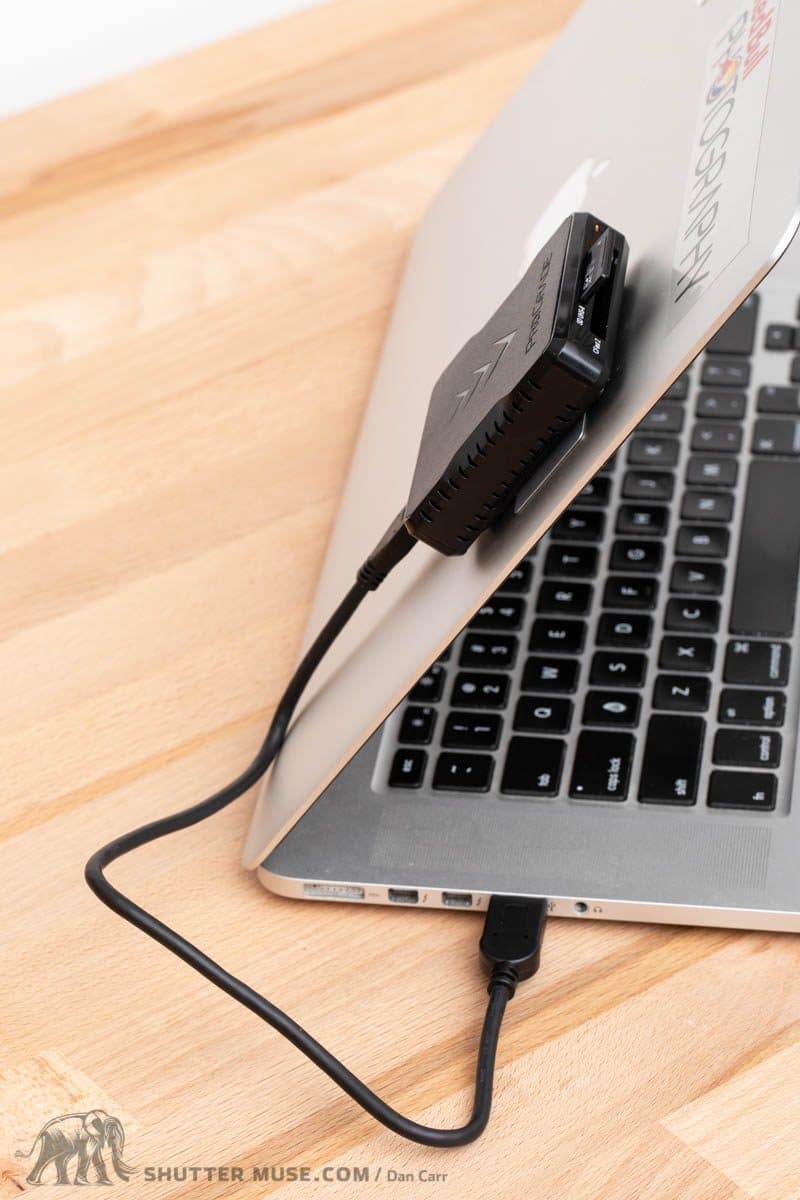 Giving you meaningful, specific read and write speed figures from a card reader test is a hard thing to do because with current card technology, these speeds are are mostly limited by the speed of the card and not the reader. Memory card read and write speeds fall well short of the theoretical maximum throughput of the USB 3.1 Gen. 2 interface in this card reader. For example, ProGrade Digital’s V60 SDXC cards have a claimed peak maximum read of 200MB/s, but the sustained sequential write speed is about 60MB/s. The card reader is capable of 1.25GB/s, but clearly you won’t get anywhere close to this, even if you were using both the SD slot and the CFast 2.0 slot simultaneously.

I ran some tests with my usual AJA disk test software and was able to confirm that a sustained write speed of 60MB/s was possible with my ProGrade Digital V60 cards, and a read speed of about 150MB/s was also sustained over large files. No real surprises here from the reader here (although the card fell short of its claimed speed), and like I said, your results will definitely vary depending on what kind of cards you are using. 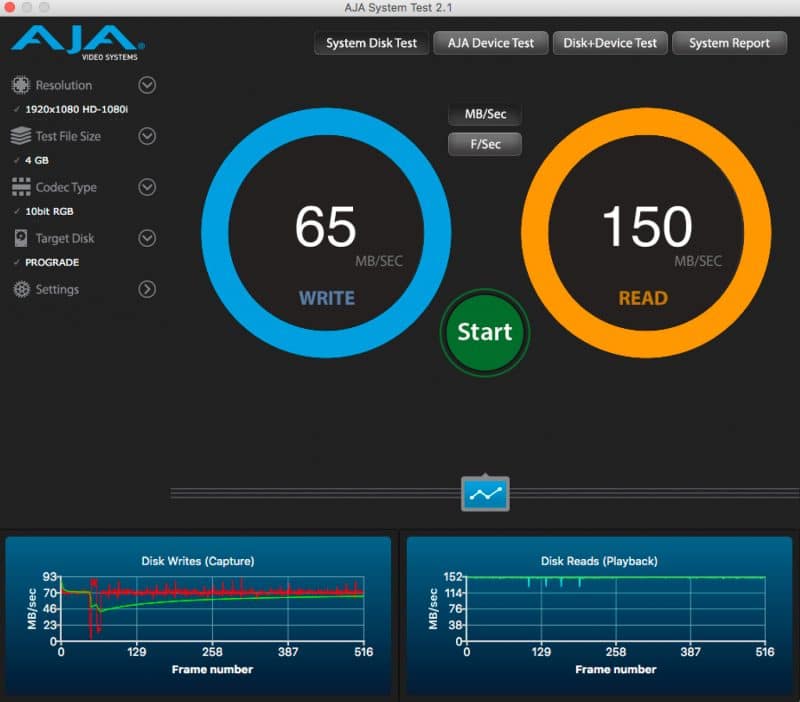 ProGrade Digital Card Reader results – pay attention to the read speed, this is what can make a difference to your workflow.

I tested it with both the Type-C to Type-C cable on a USB 3.1 Gen.2 port, and also with the Type-C to Type-A cable on a USB 3.0 port. Both tests produced identical results, which is also to be expected. Whilst USB 3.1 does have much larger theoretical maximums than the old USB 3.0 standard, that older 3.0 standard is still easily capable of managing the full speed of current SDXC card technology. In other words, it doesn’t really matter which of the two provided cables you have to use, you’re going to get the same performance from your current cards. I guess it’s possible that at some point in the future there will be cards that approach the maximum speeds, but I think there will be new card readers on the market by that point anyway.

Whilst my specific read and write speeds aren’t all that useful to you guys, the comparative test results with other card readers definitely are. I tested the same ProGrade Digital V60 SDXC card in both my current Lexar dual-slot card reader that I have been using for many years, and also in the SD card slot that’s built into my MacBook Pro. Here, the results got very interesting!

Write speeds remained pretty consistent, but for in-camera usage that means little to me anyway. What I’m interested in is the read speeds, because this is the factor that determines how fast I can download the images off the card at the end of the day. Using both my current Lexar card reader and my MacBook Pro’s internal SD slot, I was able to get read speeds of about 86-88MB/s. However, with the ProGrade Digital USB 3.1 Gen. 2 Dual-Slot Card Reader I was able to consistently achieve 150MB/s. That’s a HUGE difference! 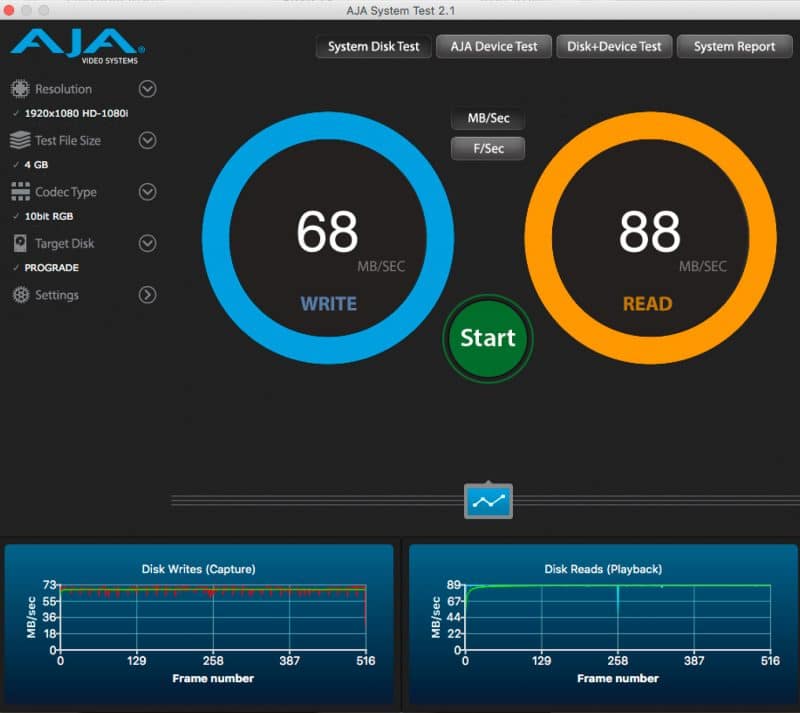 Reading the same card using the built-in SD card reader on my MacBook Pro. A significant reduction in read speed!

To put that into perspective, if I was downloading 128GB of photos from an SD card in the ProGrade Digital reader it would take me about 14 minutes. If I was doing the same thing using my Lexar reader, or the slot in my MacBook Pro, it would take me 24 minutes at these speeds! If you are a photographer who is working to a deadline in a media centre, perhaps covering news or sporting events, every minute counts when you need to get photos up on a wire service and get yourself back out in the field. A 10-minute saving on a 128GB download is significant!

Honestly, I was really surprised by this. I had always figured I was using a good card reader (the Lexar one), and when you plug an SD card directly into your laptop you also assume that it’s going to be a fairly efficient way to transfer files. As it turns out, there are faster ways to work, and one of them is by using this card reader. I just love it when I learn something new like this that will really benefit my workflow, even more so when I get to share the findings with all of you guys too! I’ve never done a card reader group test before so it’s hard for me to say whether this ProGrader Digital reader is the fastest on the market, but it’s certainly a significant improvement over the setup that I have been using for many years, so that’s definitely a pleasant thing to discover.

I have been thoroughly impressed by this card reader,  (Amazon, B&H Photo) with its incredibly high read speed, forward-thinking USB 3.1 Gen. 2 interface and clever mounting feature. If you’re looking for a CFast card reader then this is an excellent option, and price-wise it compares reasonably well to other CFast readers on the market, whilst also offering that additional SD slot.

If you’re just looking for an SD card reader, and have no need for CFast compatibility, things aren’t going to be quite as clear initially – this is definitely an expensive SD card reader if that’s the only slot you plan on using. I personally hope that ProGrade Digital keep this same form factor and launches a dual-slot SD version of this reader at some point. I think it would be a more relevant product for the majority of people out there, given the extremely low number of cameras that use CFast cards.


Whilst it is an expensive solution if you’re just using SD cards, it’s built like a tank and that also counts for something when you’re relying on it during fast-paced assignments and continuous travel. Professional users are often working with over $10,000 of camera equipment, and another $5000 in laptops and hard drives on any given assignment. When you think of it like that, the extra $30-$40 that you’re paying for this reader over another brand of card reader doesn’t seem so bad, and it’s definitely a higher level of product than I’ve come across before in this sector of the camera accessory market. On top of that you are getting some significant time savings in your workflow every time you download a card, and to me that’s definitely worth some extra money!