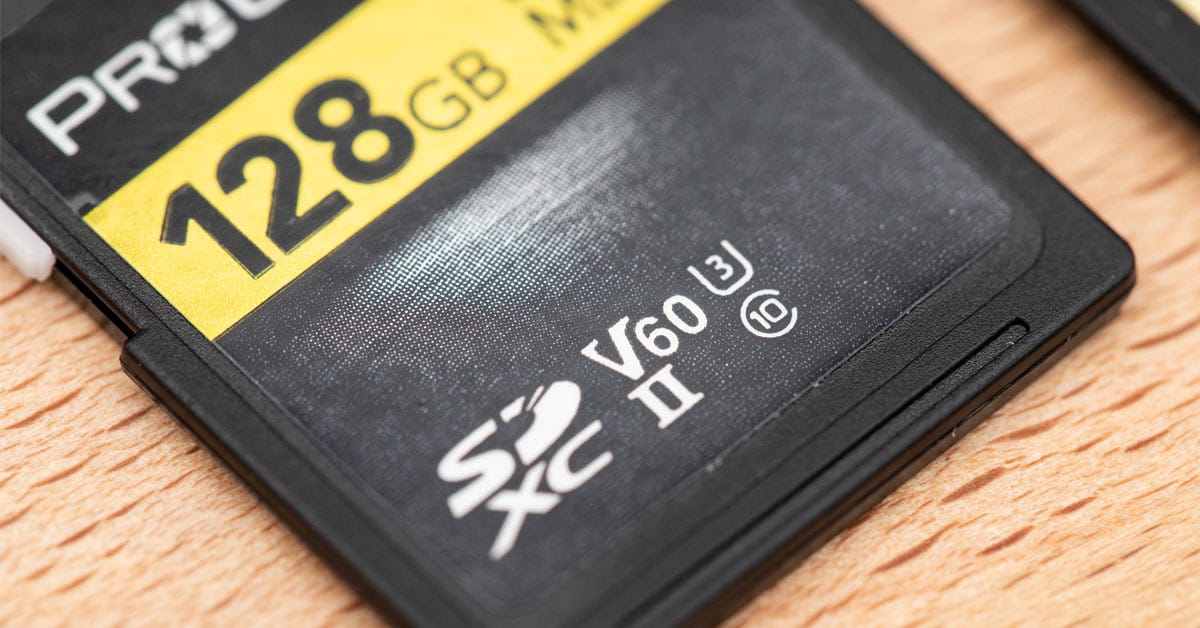 Whilst testing a new ProGrade Digital SD card recently, it really struck me how much of a mess the SD card association has made with card speed classifications and SD card nomenclature. There are so many symbols written on SD cards these days that it’s really hard to understand what you need for your camera, and what the card is actually going to give you. In this article I’m going to explain things in as simple terms as possible!

All memory cards will perform at slightly different speeds when data is being written to them, and when data is being read from them. In 99% of cases, the read speed of the card will be much faster than the write speed. Of course card manufacturers want to put the biggest number on the card, so if you see something like 100MB/s (megabytes per second) written on the card, it’s referring to the read speed and not the write speed, unless stated otherwise. Not only that, but they will also most likely be quoting a peak maximum read speed, rather than a sustainable speed. Sustained write speeds tend to be a few percent lower, but I have encountered some cards in the past that reach nowhere near their quoted read speeds. In other words, that number is a first indicator of a card’s performance, but it’s not the only thing you should be looking at.

Confusingly, there are some major SD card manufacturers that don’t quote their card speeds in MB/s at all, and instead use a speed factor such as 1000X. Lexar is probably the most likely brand that you’ll come across who does this, and it doesn’t help the consumer at all because it means that in the spur of the moment, you can only really compare Lexar cards to other Lexar cards on the shelf of your local store.

This speed naming scheme is a leftover from the days of CD-ROM drives, where a standard speed drive read things at 150KB/s.  Therefore 1X is equal to 150KB/s. It’s a ridiculously arbitrary way to label SD cards in the modern age! Below is a table of some common speed ratings so that you can easily convert things to the much more useful MB/s rating.

Another point of confusion that often arises while discussing or researching memory card (or hard drive) speeds, is the bits and bytes. MB/s means megabytes per second. Mb/s means megabits per second. Sometimes these are also written as MBps and Mbps just to confuse things even further.

There are 8 bits in a byte, so to get from megabytes to megabits you just multiply by 8. Conversely, if you have a speed that’s quoted in megabits per second (Mb/s), simply divide it by 8 to get to megabytes per second. There’s far too many possible and regularly used values of these to create a handy table like I did in the previous section, so I’ll refer you to this online bits/bytes calculator instead.

You won’t often see SD card speed quoted in megabits per second, most brands do stick to megabytes per second, but you will often see megabits used in camera specifications when talking about video data rates. For example, in the specifications for the Panasonic GH5s it lists the following data rate for 4k video at 60fps: 4K 50/60fps internal recording in 4:2:0 8-bit at 150Mbps in IPB.

If you aren’t paying attention, this can be very confusing! The data rate for this particular video format is 150Mbps – that’s 150 megabits per second, which equates to 18.5 MB/s (Math: 150 divided by 8).  It would be quite easy to find a memory card that is capable of a continuous write speed of 18.5 megabytes per second, but not so easy to find one that would be capable of 150 megabytes per second write speed, had you got your bits and bytes confused! 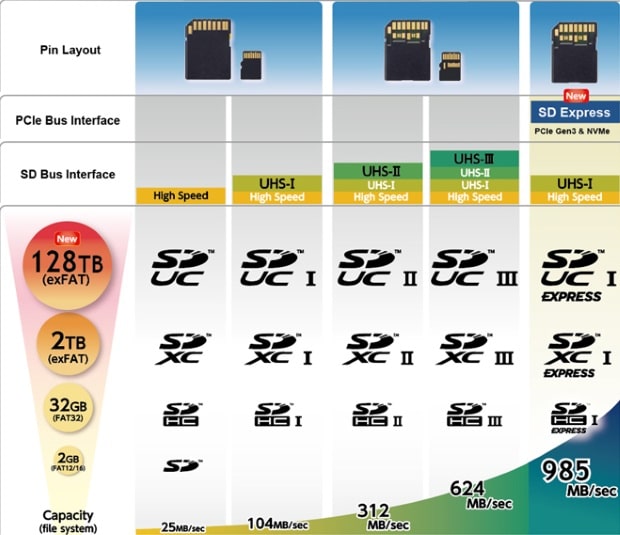 These different types of SD cards all have the same form factor, although the pin layout on the back of SDXC and SDUC cards is different to the earlier SD and SDHC cards. Essentially what you see here is like a timeline of SD card evolution. Most devices built after 2010 will have a card slot that is compatible with SDXC cards, but if you’re not sure, you should consult the manual for your camera because an SDXC card will not work in a slot that was only designed for older SD or SDHC cards. However, older SD and SDHC cards will work in an SDXC or SDUC slot. SDUC cards are based on the newer SD Express interface which uses PCIe and NVMe transfer protocols to allow a huge increase in read and write speeds compared to all previous versions (up to 958MB/s). At the time of writing this guide, the SD Express format has been announced, but there has yet to be a camera that supports it, or a manufacturer making SDUC cards that use is. Their time will come though.

Now, this part might seem complicated, but let me simplify things for you. As SD cards evolved, these new types of cards essentially just allowed higher capacities and higher speeds. All you need to do is concentrate on getting an SD card that has the right capacity for your needs (16GB, 32GB, 64GB, 128GB etc.) and then possibly using the information in the next sections to make sure the card also has the speed that you need. If your camera is from after 2010 then it won’t matter what SD format the card is. Out of all of the little logos that are stamped on an SD card, this one is perhaps the least important. Just get the capacity that’s right for you, and double check that your camera will support it. The answer will be ‘yes’ for 99% of you. 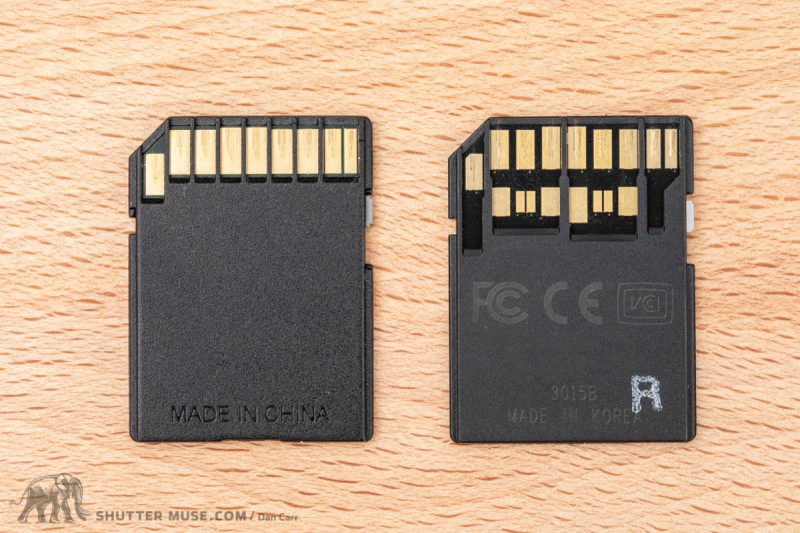 Recently I have seen more and more card manufacturers simplify this to just putting a I or a II on the card, and omitting the UHS lettering (see header image of ProGrade Digital card). Probably because they now have to have so many other symbols on there too!

UHS-II is a faster interface and the pin layout on the back of the card is different – it was introduced with SDHC, so you will not find any old SD cards that use UHS-II. The thing to remember with this one is that both the card and the device you are putting it into need to have UHS-II in order for you to actually see the speed benefits associated with this newer interface. There are some popular cameras out there that actually have a UHS-I SD card slot in them, such as the Canon 5D Mark IV. Putting a UHS-II card into a camera that has a UHS-I slot in it will work, but you won’t see the speed benefits as it will just fall back to the UHS-I protocol.

That said, were you to have a UHS-II memory card reader such as the ProGrade Digital Dual-Slot reader that I tested recently, you would at least be able to benefit from faster downloading of your photos onto your computer. In other words, just because your camera doesn’t support UHS-II doesn’t mean you should entirely write off the option of getting a UHS-II card. The other thing to remember is that more and more cameras are supporting the faster UHS-II standard, so it’s quite possible that your next camera will support it. 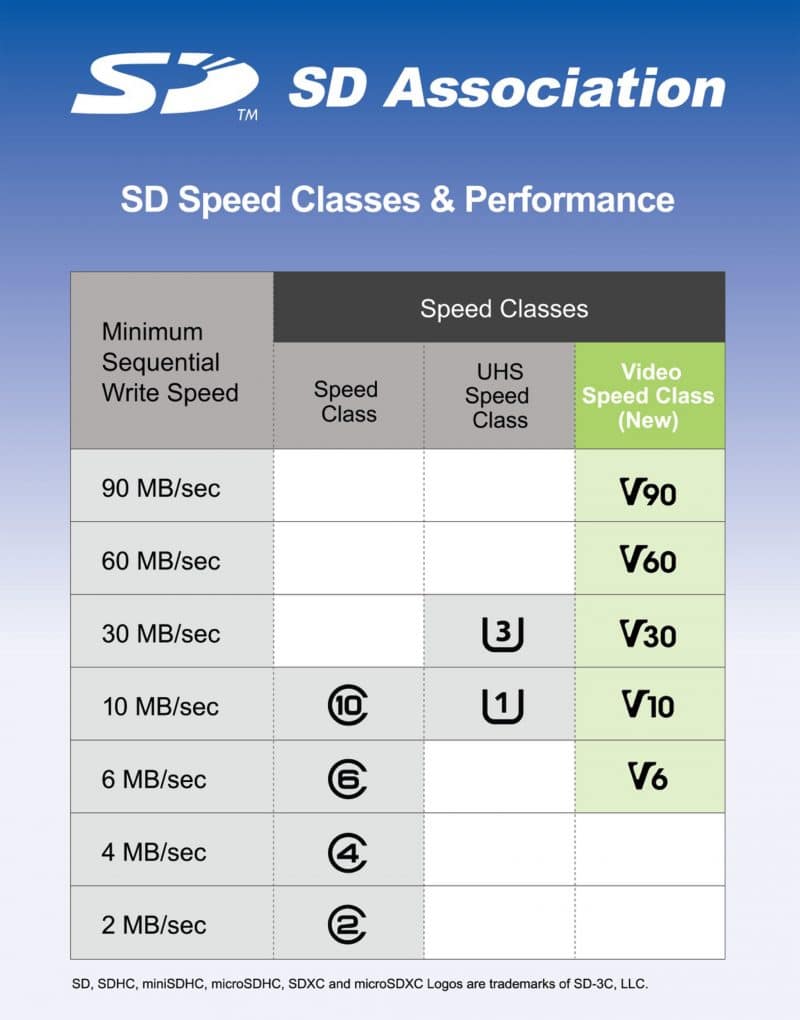 The complication in all of this comes from the fact that the SD Card Association has changed the way they represent this information three times. I’m hoping that the table below will make things clear to you, but essentially they started off by calling thing “Class 2”, “Class 6” or “Class 10” to mean a minimum write speed of 2MB/s, 6MB/s or 10MB/s in these examples.

Then they decided that this was too many letters to write on the SD card, so they changed it to use the U-standard and things took the form of U1 and U3. In these examples, U1 corresponds to a minium speed of 10MB/s and U3 is 30MB/s – essentially just divide by 10 and stick a U in front of it. But the problem here is that people kept using different standards to describe things. So a card might say Class 10, U1 on it, which both mean exactly the same thing! A camera manufacturer might say that their camera needs at least a Class 10 card in it, but if an SD card company had entirely moved to the U-standard, and was labelling their cards as U1 instead of Class 10, they might lose a sale to a confused customer who was just scanning the shelves looking for a card that said “Class 10”. End result: cards that say both Class 10 and U1 on them. 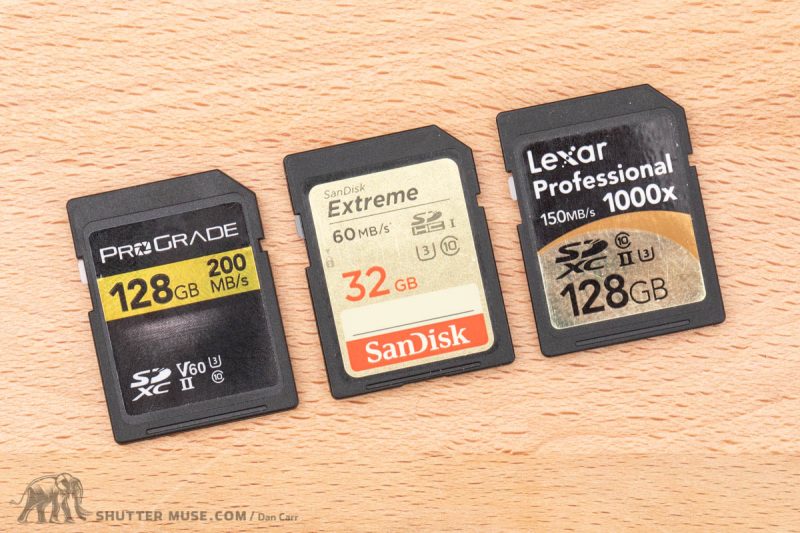 But it actually gets even dumber than that because card manufacturers now feel the need to use the old standards on the cards even when their card speeds have long surpassed those lower speeds. For example, take another look at the card in the header image. It has both the C1 (Class 10) symbol AND the U3 symbol on it. Remember that U3 guarantees a minimum of 30MB/s write speed, so it’s 100% pointless to also have the C1 symbol on the card because all this is saying is that it will deliver a minimum of 10MB/s. Well yes, of course it will! If it’s going to deliver 30MB/s, of course you’ll also get 10MB/s because, well, that’s just how numbers work!

Then the association decided to take things another step and implement the V-standard, which means exactly the same thing as the U-standard but uses a different letter. For example, a V30 card guarantees 30MB/s, just the same as a U3 card does. So now you have cards that have a V-standard on them, a U-standard, and a Class C-standard when all they really need is one of them to tell us what we need to know. What a mess!

Honestly, I’m a pretty big photo gear nerd and until I really looked into all of this I was totally clueless as to why there were so many ratings stamped on these cards. When I discovered that many of them were redundant, old and pointless I was really surprised! Hopefully this table will clear things up for you:

In some cases you might see an SD card with A1 written on it, and I assume in the future there will also be A2, A3 and so on. This is an indication of the random read/write speeds that the card can deliver, which is useful to know if the card is running applications on it within a device. This is a relatively new specification, but if you’re a photographer then you can simply ignore it. Cameras rely on sequential reading and writing to a card, not random reading and writing as a computer would do to a hard drive. Since this is a photography website, I think it’s a safe bet to say that you can ignore it. Buying a card that has an A-rating on it will make absolutely zero difference to you because a better A-rating doesn’t necessarily translate to better V-ratings or a better peak read speeds.

What About Other Card Types?

SD cards are by far the most popular type of memory cards for cameras, so this article concentrates solely on them and their naming schemes. CompactFlash, CFast, XQD and the new CFexpress cards all have their own naming schemes with different sets of symbols, abbreviations and acronyms. In the future I might tackle those individually in different posts.