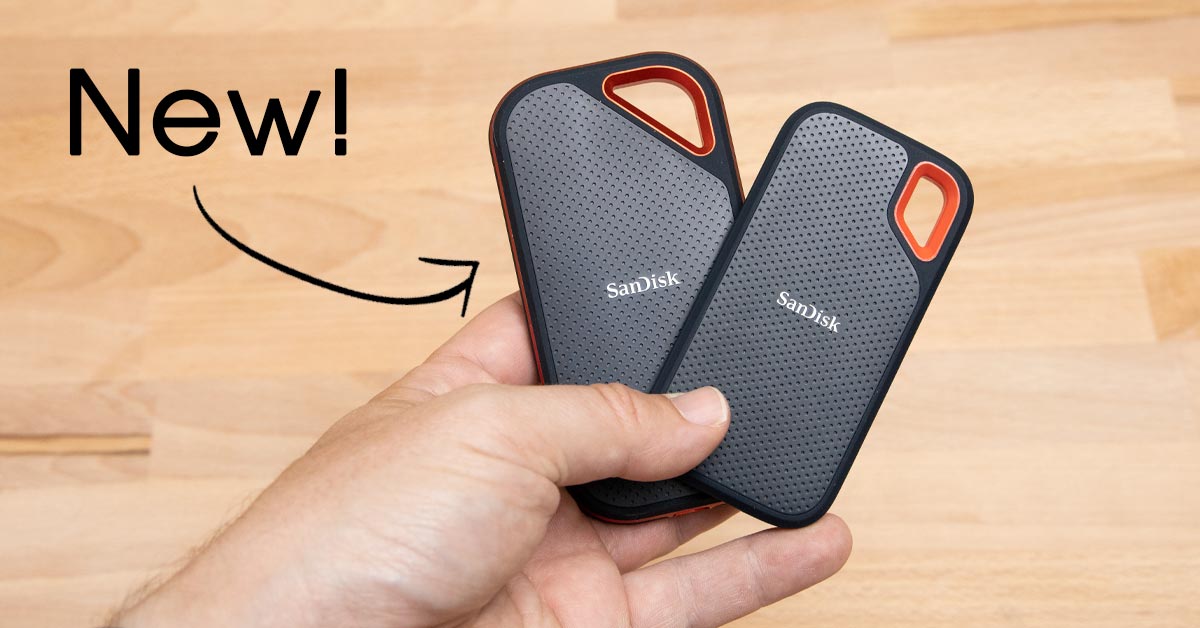 The Sandisk Extreme Pro SSD is an upgraded version of the Sandisk Extreme Portable SSD that I have reviewed before, available in 500GB, 1TB and 2TB sizes. Rather than replacing the previous version, the new Pro version – which uses faster NVMe technology – will sit alongside it as a more expensive option. We like options, especially affordable SSD options, so let’s take a look at Sandisk’s latest offering and see how it performs alongside the previous generation.

Not too long ago a solid state drive would have seemed like an expensive extravagance to me. Mechanical hard drives (HDDs) will always be cheaper, and the expense and limited capacity of SSDs had them out of reach for many people. Then a new wave of cheaper SSDs began to appear on the market, led by the previously reviewed Sandisk Extreme Portable SSD. This new wave of drives was cheaper, but not because corners in speed and quality were cut, it was simply Moore’s law at work. The price of SSDs had finally collided with a useable capacity at a reasonable cost, and suddenly they became a viable option for many creative amateurs and professionals. Great news for photographers, because SSD technology is many times faster than HDD tech, which results in huge amounts of time saved when downloading and editing images.

Now in 2020, we are seeing the next step in SSD technology: NVMe (Non-Volatile Memory Express). These drives use a PCIe express interface instead of the older SATA interface that is used by HDDs and the previous generation of SSDs. NVMe SSDs are roughly twice as fast as SATA SSDs. Although the NVMe standard has been around since 2013, it is only now starting to reach that critical price/performance ratio that SATA SSDs did a few years ago.

The Sandisk Extreme Pro SSD is an NVMe version of the Extreme Portable SSD, and Sandisk claims that they are capable of reaching speeds up to 1050 MB/s, compared to the 550MB/s of the slightly cheaper models. At first glance, the drives look identical, but the side-by-side comparison shows us that the new Pro drives are slightly larger than the non-Pro version.

In the hand, the Extreme Pro SSD also feels a little more solid due to the use of aluminum in the case construction. While it’s not an all aluminum construction as I had imagined when seeing the press photos, some extra rigidity is definitely added by its use. The cheaper Extreme Portable SSD uses an all plastic and rubber case.

In practical terms the extra size of the Pro doesn’t make any difference, these are still incredibly small drives that will easily find a slot in your camera bag, laptop bag or even your pocket without having to think about it. The difference in size between one of these drives and a cheaper external hard drive is significant. If you have to travel with two or three backup drives as I do, this difference in bulk and weight might be worth the switch to SSD alone. Particularly with every decreasing baggage allowances, and my ever-decreasing ability to carry overloaded camera bags as my age approaches the big four zero :p

The drive doesn’t just feel solid, it also comes with the assurance of an IP55 rating for water and dust resistance. This means that the drive is water-resistant – “protected against water jets projected by a nozzle (6.3mm) from any angle” – but not fully drop-it-in-the-ocean waterproof. It’s also protected from dust ingression and drops by the silicon rubber outer casing. Assuming you don’t drop it in your drink, the drive should confidently survive the normal rigours of travel and life on set.

Sandisk’s theoretical maximum speed for this drive is 1050MB/s. These are in ideal lab conditions, so the real-world result of 950MB/s is still incredibly impressive, and well within what I would call acceptable margins from the quoted max speeds. The consistency of the drive was also impressive, logging identical results +/- just 1MB/s time and time again. I don’t think I have ever seen such consistency before.

In my testing with the older (but still current model) Sandisk Extreme Portable SSD, I was able to reach read speeds of just over 500MB/s. This result was impressively close to Sandisk’s theoretical maximum of 550MB/s.

As expected, this is around half the speed of the NVMe equipped Extreme Pro SSD. For a lot of people, this is going to be a tough choice because the price difference between the Portable SSD and the Pro SSD is fairly minimal. At the time of writing this review, for example, the 1TB Pro SSD was just $40 more than the non-Pro version. $40 to double your drive speed? Personally, I would take that option, but at least people on a tight budget have some options, and either of these drives is absolutely blazing fast compared to the ageing hard drives that many people still have.

Compared to the Competition

Careful examination of the NVMe landscape will reveal three different styles on the market. Firstly you have your semi-rugged NVMe drives that use the USB 3.1 Gen2 interface. The Extreme Pro SSD falls into this category. Yes it’s rugged to a point with its IP55 rating, but there are certainly more rugged options out there. One such drive is the LaCie Rugged SSD. This uses the same NVMe tech and the same USB 3.1 Gen2 interface but bumps things up to IP67 dust and waterproof rating. This is a drive you can actually submerge in water for several minutes.

The LaCie Rugged SSD should produce roughly similar speeds to the Extreme Pro SSD because they both use the 3.1 Gen2 interface which tops out around 1000MB/s, and the interface is actually the speed bottleneck in the setup. The LaCie is slightly more expensive, but it does offer more protection.

The third type of NVMe drives are ones that use Thunderbolt 3 instead of USB 3.1 Gen2. NVMe is actually capable of far more than 1000MB/s but the USB standard is not (currently). In order to unlock the maximum speed of NVMe drives you need to use a Thunderbolt 3 connection, which adds some cost.

At the moment the main competition for this configuration is the LaCie Rugged SSD Pro and the G-Technology G-Drive Mobile Pro SSD. Both of these drives are capable of speeds up to around 2800MB/s.

If ultimate speed is what you need, there’s no denying that the Thunderbolt drives have a significant edge. But it comes at an additional cost, and the reality is that most people probably don’t need those speed unless you are working with 6k or 8k RAW video. There’s no benefit to using a drive that fast for ingesting memory cards from cameras because there are simply no cards out there that have read speeds reaching anything close to 2800MB/s. The card would always be the bottleneck in that situation. The real benefits of those faster Thunderbolt NVMe drives would only come when editing or transcoding 6k or 8k video directly off the drive, or when duplicating backups from one drive to another drive of a similar speed, through an entirely Thunderbolt 3 environment.

I’m sure cinematographers will consider the Thunderbolt drives, but photographers will be just fine using the slightly cheaper drives like the Extreme Pro SSD we are looking at today. For most people, I think the choice will simply come down to Sandisk Extreme Pro SSD vs. LaCie Rugged SSD. Speeds are comparable, the LaCie offers more protection, but the Sandisk is quite a lot cheaper, particularly the 2TB version which can often be found for several hundred dollars less in sales on B&H Photo.

The Sandisk Extreme Pro SSD is a worthy addition to the brand’s lineup. With the newer NVMe technology, this drive is twice as fast as the slightly cheaper Extreme Portable SSD from their catalogue. Although the size of the drive has grown slightly to accommodate the size of an NVMe drive, it still remains the smallest on the market and will easily slip into a pocket. In fact, you could fit several of these in your pocket, let alone your camera bag.

The blazingly fast speed is impressive, but that was to be expected from this newer technology. What impressed me the most was actually the value of the drive. The Pro SSD is not all that much more expensive than the non-Pro version, and with that slight increase in price, you get double the speed and a build that feels a little more solid. When I reviewed the older version I said it was the best value SATA SSD on the market, and now I have to say the Pro version is the best value NVMe SSD on the market. If you don’t need the huge drive capacity that’s offered by an HDD, and you don’t need the waterproofing of the more expensive LaCie Rugged SSD, the Sandisk Extreme Pro SSD is a great buy.