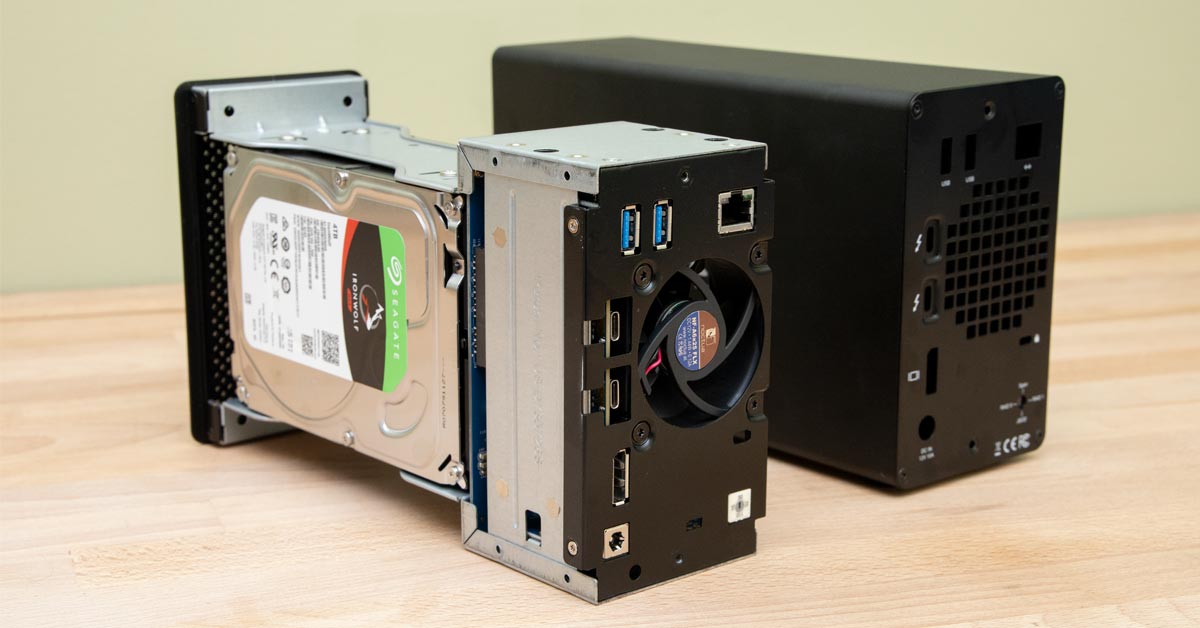 Regular readers know that I like to keep you all informed about the backup solutions for my photos, and this month I came across a new product that I thought might help me. Sometimes I borrow gear from people to review, but in this case I just went and purchased the OWC Mercury Elite Pro Dock, simply because it appeared to be both the perfect solution for my needs, and a wholly unique product on the market.

NOTE: OWC also own Akitio. The Akitio Thunder3 RAID Station is the same product as the OWC Mercury Elite Pro Dock, simply with a different logo on the front.

The OWC Mercury Elite Pro Dock is similar to a regular Thunderbolt 3 dock, but with one main difference: It also has space for two 3.5″ hard drives (or SSDs) which can be configured as a hardware RAID or JBOD device with the following options:

The Mercury Elite Pro Dock has the following ports:

For many people this. set of ports will be plenty when you consider that there are two drives inside the dock, negating the potential need for the connection of two drives via USB. If you need additional USB ports, or other ports, you can connect any USB-C hub to the second Thunderbolt 3 port. For example, you could connect this Anker USB-C hub and it would add an additional 3x USB-A ports, an additional Ethernet port and an HDMI port.

What I was personally looking for was a new way to connect a Time Machine backup drive, and a bootable clone of my startup disk. This is two distinct drives, so I set my unit to JBOD mode and loaded it up with a pair of 4TB Seagate IronWolf drives. I prefer to use SeaGate drives as I think their customer service is much better than Western Digital, based on interactions I have had with both companies.

You can buy some pre-configured setups which come with the drives installed, but I always like to buy my own drives when I can, so I nought the empty unit and grabbed some drives on Amazon. Drive installation takes just a few seconds, simply slide the cover off and use 4 screws to secure the drives once you have slid them into the dock.

Once the drives were installed and I connected the included Thunderbolt 3 cable to my laptop, all my connected devices and the two new drives showed up immediately. Setup couldn’t have been simpler.

The Mercury Elite Pro will output up to 27w of power through the Thunderbolt 3 cable. This should be enough to keep Macbook Airs and 13″ MacBook Pros powered up completely while you are using them and plugged into the dock. If you use a 15″ or 16″ MacBook Pro you might find their power consumption during usage will exceed the 27w input. What this means is that during your day when in use, your battery might slowly discharge. If you used it continuously all day, you might -might- run down the battery. What would probably happen for most people is they would run it down a little, then go away to do something else and in that time the power usage would drop below 27w and the laptop would charge back up again. If you have concerns about this, of course you can simply use the normal Apple power adapter. Personally I used it with a MacBook Air with no issue or battery depletion, but with my MacBook Pro I used the additional Apple power adapter because occasionally that machine performs long, automated overnight backups and I don’t want it to run low on power during those.

While I do wish the power delivery was higher, it can at the very least be used to charge a laptop overnight, and in many cases it will be no issue at all with smaller laptops. Delivering more power would almost certainly have resulted in larger, noisier fans or an increased case size to accommodate a heat sink or additional air flow.

I found the literature surrounding the speed of the built-in SD card reader to be confusing. Nowhere on the OWC site or in the documentation does it ever mention the phrase “UHS-II”, so I was very curious as to whether the slot would function at UHS-II speeds. UHS-II is considerably faster than UHS-I (at least twice as fast) as long as you are using a UHS-II SD card.

OWC refer to the SD card reader as being “SD 4.0”. I have no idea what SD 4.0 is. It’s certainly not nomenclature that SD card manufacturers use on their SD cards, so it’s not a very helpful way to describe card reader speed when every other card reader manufacturer is simply stating UHS-I or UHS-II to indicate potential speeds.

I’m pleased to report, though, that after running some speed tests with AJA’s drive speed tool, I can confirm that the built-in SD card reader slot is UHS-II compatible, and you can therefore get some truly excellent download speeds off your UHS-II SD cards. This could save you a lot of time if you are importing photos from large cards such as 64GB, 128GB or 256GB capacities. Great news! I don’t know why they do not clearly state this on the website.

Note: Read about my preferred UHS-II SD cards here, and why I froze them to test their durability…

I realize I could have chosen to use a regular Thunderbolt 3 dock and then plugged two external USB drives into that dock, but this Mercury Elite Pro Dock gives me a simpler setup with more options. In the future, if I need to, I can switch the dock to one of the RAID modes to add extra speed or redundancy. I can also easily upgrade the box by adding larger drives to one or both drive slots, or perhaps add faster 2.5″ SSD drives instead.

An excellentThunderbolt 3 dock such as the CalDigit TS3+ costs almost the same as the OWC Mercury Elite Pro Dock anyway, and the Mercury dock has a 2-slot hardware RAID built into it, so I think it represents excellent value. Even more so when you then take into account the savings you can make by buying bare 3.5″ drives to put into it instead of having to buy drives that are in their own USB housings. And even more again if you don’t yet own a good UHS-II SD card reader which can cost over $50 on their own.

My one gripe would be that I wish it offered 40-50w of power delivery instead of just 27w, but otherwise I’m very pleased with this new addition to my office setup. In fact I’m already thinking about buying a second one so that I can have one dedicated to each of the laptops that I use.