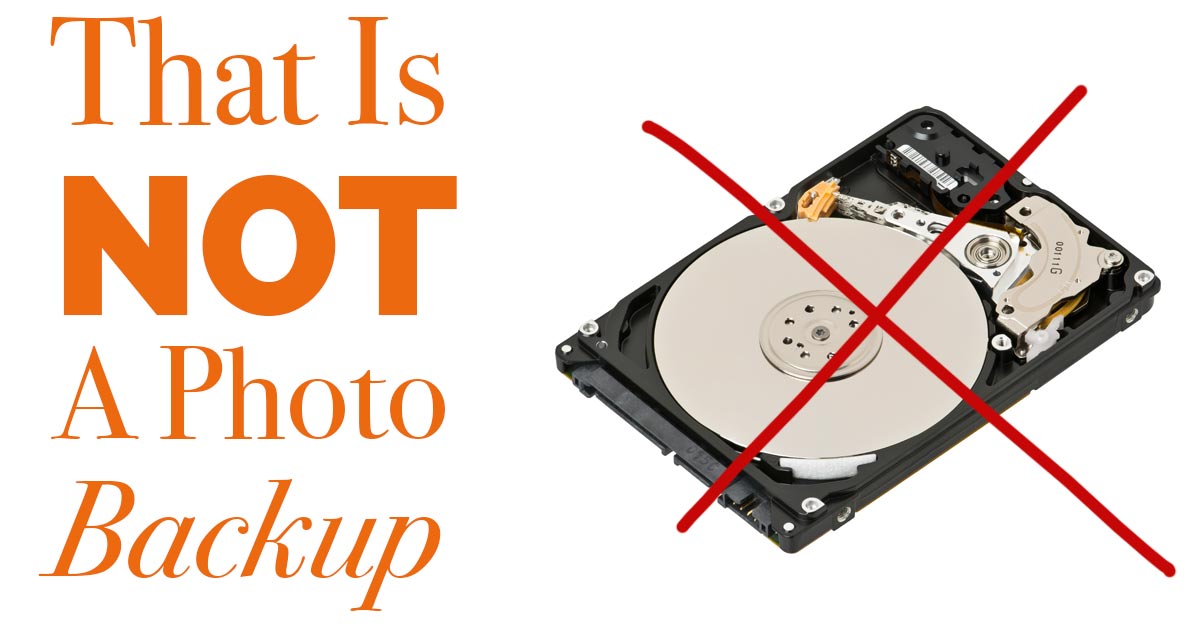 While reading some hard drive reviews on a popular online store, I discovered that many people don’t understand the term “backup”. This misunderstanding is a huge problem. Reading a small sampling of customer reviews showed me that the misunderstanding has caused many people to lose all their data. Imagine if you were to lose all your photos!? You’d be devastated, and it could be financially crippling if photography is your business. In this post, I will explain what all of these people got wrong and ensure that it doesn’t happen to you.

RAID is Not a Backup

A RAID hard drive system configured as RAID 1 means that all data is duplicated onto a second drive. Many people mistake this as being a safe backup solution and think that everything is safe because they now have two copies of their photos. Many Drobo owners also feel the same with Drobo’s own Beyond Raid technology. These people are wrong!

RAID 1 devices protect you from drive failure, so if one of the drives fails physically in a catastrophic manner, your data will be accessible on the other drive. This is great because drive failures are an unfortunate certainty at some point, but it’s not the end of the story. Mechanical drive failure isn’t the only way that you can lose your files!

Sometimes file systems get corrupted, and it renders the data unreadable. It doesn’t happen often, but it does happen. With a RAID 1, since the drives are mirrored, this corrupted file system gets duplicated as well, and all your photos can be lost in the blink of an eye if you are only relying on a RAID 1 mirror as your “backup”.

The other common way to lose an image is through simple human error. We’ve all accidentally deleted the wrong file at some time in our lives, and whilst things are sometimes available in the trash can, this isn’t always the case if you have accidentally performed a secure erase or emptied the trash. The trash can also work differently with externally attached drives, so it’s not a total safety net. With a RAID 1 drive, if you accidentally delete a photo (or folder of images) from one drive, it immediately gets deleted from the other drive. You can’t really call that a backup now, can you?

When you connect a RAID 1 device to your computer, the two drives (or multiples thereof) show up as one single mounted volume. A good rule is that your files need to exist on multiple volumes. Since the RAID 1 drives only show up as one volume, this is not a backup. If you connect two RAID 1 drives and use a program like Carbon Copy Cloner to copy files from one to the other, then you will have two volumes and therefore have a useable backup.

As I mentioned at the top of the post, I was compelled to write this after reading a series of user “reviews”. Here’s is a quote that perfectly underlines a common misunderstanding with file backup, and this guy wasn’t alone in his thinking:

Do not make the same mistake that I did and use this drive for backing up anything that you don’t have an alternative backup for. – review from online store.

In this case, the gentleman responsible for this quote referred to a file system failure that had caused him to lose all of his data from an externally connected drive. Hopefully, after reading the first section of this post, you will see the problem here. It turns out that the support techs for his failed drive had informed him his files were lost and suggested he restore his files from his other location. Of course, we can see that he didn’t have another copy of the files anywhere else, so they were all gone.

The critical misunderstanding is represented in his phrase “anything that you don’t have an alternative backup for” as if his first copy of the files on his external drive was a backup. If he had maintained the files on his computer AND his externally connected drive, that would be considered a backup. The files would be in two places on two volumes and not directly mirrored, but unfortunately, it seems that he was under the assumption that putting things on an external drive is considered a backup.

I’m sure that some people, maybe even many people, are aware this isn’t the case, but having read similar stories to this guy’s one all morning, I want to make sure that everyone gets on the same page. Yes, backups are almost always on externally connected drives, but not all externally connected drives are backups. Simply having the files on an external drive doesn’t make it a backup unless you also have those files in another location.

It’s best to have them in more than one other location, but you can read more about that in my article about my photo backup routine. The same thing goes for RAID devices as well. They are a helpful way to maintain continuous access to files in a single drive failure, but they are not a backup on their own, simply hardware redundancy. A backup is a copy of your file located in a different place. It could simply be on a separate drive volume or a different physical location (using a NAS or cloud storage).

Another reason that RAID doesn’t necessarily mean that your photos are backed up is because many standard RAID configurations (RAID 1, RAID 5) can only protect you from a single drive failure. If two drives fail simultaneously, you will lose all of your data instantly. I’m explicitly drawing attention to this because I know a photographer who had this happen. Unfortunately, she had two simultaneous drive failures in her device, and a career’s worth of photos was gone in a flash. Devastating.

Simultaneous drive failure might sound unlikely, but it’s actually more common than you might think. Hard drives have a lifespan and most people buy all the drives for their RAID device simultaneously. It, therefore, stands to reason that if one drive fails due to regular wear and tear, the others can’t be far off. A quick Google search will bring up many tales of this kind of double failure.

The danger can be somewhat mitigated by using RAID configurations that can handle multiple failures, such as RAID6, or using dual disk redundancy mode if you have a Drobo. However, the best solution is to have all of your images on a second onsite device and a third offsite device. This is precisely the approach I take.

I hope that this article, along with the many other backup related posts on this site, helps you to secure your photos for a lifetime. I’m beginning to lose track of the number of horror stories about photographers losing their photos due to improper backup routines. It’s entirely preventable if you follow the best practices that I’ve laid out in my backup routine posts. Please take the time to read them!