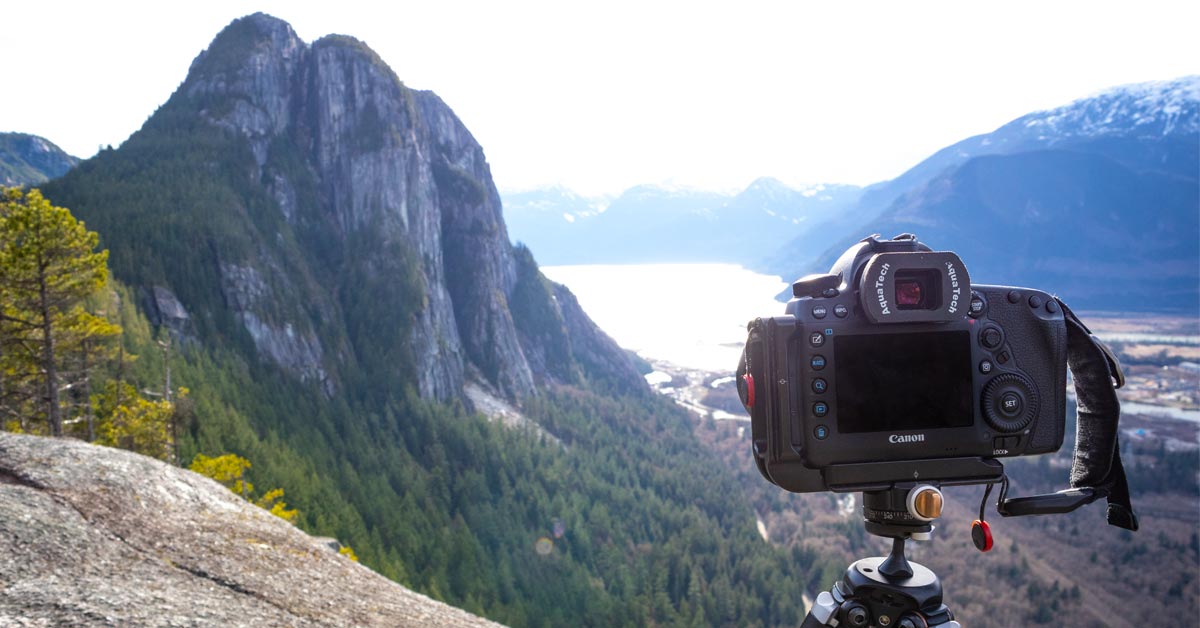 We know photography is a waiting game. Sometimes you strike it lucky and Mother Nature rewards your efforts with incredible, dramatic sunrise or sunset light. Other times it can seem like you’re fighting a losing battle and things just don’t seem to ever pan out how you want them to.

In recent weeks I’ve had a run of bad luck. Two weeks ago I drove 3000km to photograph a frozen lake, with some specific images in mind for a client. By the time I got to the lake, it had snowed and the glassy ice that I was looking for was nowhere to be seen. After a few days of driving, and hundreds of dollars spent on gas and hotels, I returned home without the shot I really wanted. This past week I had another idea for a photo that involved a bit of exploratory hiking in a place about 100km away from where I live. The shot I had in mind this time required me to carry multiple cameras, remotes, flashes, tripods and light stands up to a high viewpoint above an ocean inlet. As well as the necessary camera equipment, I also had some climbing safety equipment with me just in case I needed to tether myself to the rock face to get the angle I had in mind. My backpack weighed at least 40lbs and the trail was nothing but straight up. To say it was a big effort, would be a gross understatement.

As I arrived at the location, everything was looking great. Puffy white clouds dotted a blue sky and I was there a couple of hours before sunset so I had plenty of time to rig up a fairly elaborate camera setup. The long-range weather forecast had been telling me that there were 10 days of rain on the way, and this was the last sunny day. Times like this are always a bit of a gamble. Sometimes the most dramatic images come right at the time when a new weather system is moving in, and I was hoping this would coincide with that evening’s sunset.

Unfortunately, it wasn’t to be. Half an hour before golden hour began, high clouds moved in and pushed out all the perfect fluffy ones, leaving me perched on top of a rock looking out at a dreary grey evening. Skunked once again, I trudged back down to my car by the light of my headlamp and made the drive home. Another day was wasted and more mileage burned.

Now some of you are probably looking at the header image and thinking “Yeah, yeah, Dan. Cry me a river. That’s still an awesome view and you have a job that many people would kill for.”

I get that. I hesitate to say that I know I’m lucky because there’s not a whole lot about where I am these days that came down to luck. Most of it is down to hard work, determination and a penchant for throwing caution to the wind. Perhaps I’m lucky that those things seem to be a natural part of my psyche, but that’s about as far as the luck aspect stretches. I’m not immune to frustration though, and there’s an added level of pressure to things when photography has to pay the bills.

After a string of failed photo missions, it can be hard to feel that creative fire inside you, but over the years I have developed a way to stoke those flames and I’m going to share it with you today. Best of all, it doesn’t cost a penny!

In the days of digital, it’s usual for most people to shoot a good number of images when the time and light is just right. Whilst I’m typically drawn to single exposures when it comes time to process my selects from a shoot, I usually make an effort to grab a few bracketed exposures that could also be blended into an HDR variation if I wanted. If it’s a landscape shoot, I’ll usually try and find a panoramic composition and shoot a series of images for that as well.

When I get back from a successful shooting session I jump into Lightroom and pick some selects that really grab my attention. These are the ones that I’ll take the time to process, but usually, it’ll just be a small handful, or maybe even one shot from a shoot. A lot of the time I have little use for multiple very similar images, so at this early stage, I find it a waste of time to process a huge swath of photos unless it’s for a client that needs a quick delivery.

The good thing about the way I handle this process is that there’s always more to be discovered amongst my piles of un-processed images. I can dig back into my archives and visit locations all over the world to find hidden gems that I didn’t tackle the first time. Sometimes I’ll play with blending exposures, sometimes I’ll stitch a panorama, and sometimes I just find that with this fresh set of eyes, devoid of the emotions from the immediate aftermath of a good photoshoot, I simply pick different single images as my favourites.

Furthermore, as post-processing software advances and my own tastes change, after a while you can even re-process the same images and come out with a totally different result. For example, the combination of Adobe’s clarity and dehaze adjustments can make dramatic improvements to hazy days or flat light photos that weren’t easily doable before their introduction. Images that I previously discarded out of hand, are now fresh pieces of creative putty, ready to mould into something interesting and intriguing.

When I need to feel that creative fire again I can always find it by making myself a good cup of coffee and taking a deep dive back into my archive on a rainy day. Eventually, I’ll always find something worth pulling out and processing, and it never fails to stoke that fire and help me remember all the times when sod’s law and Mother Nature’s wrath were kept at bay.