3 Legged Thing Docz2 Monopod Foot Review – Is it Worth The Upgrade? 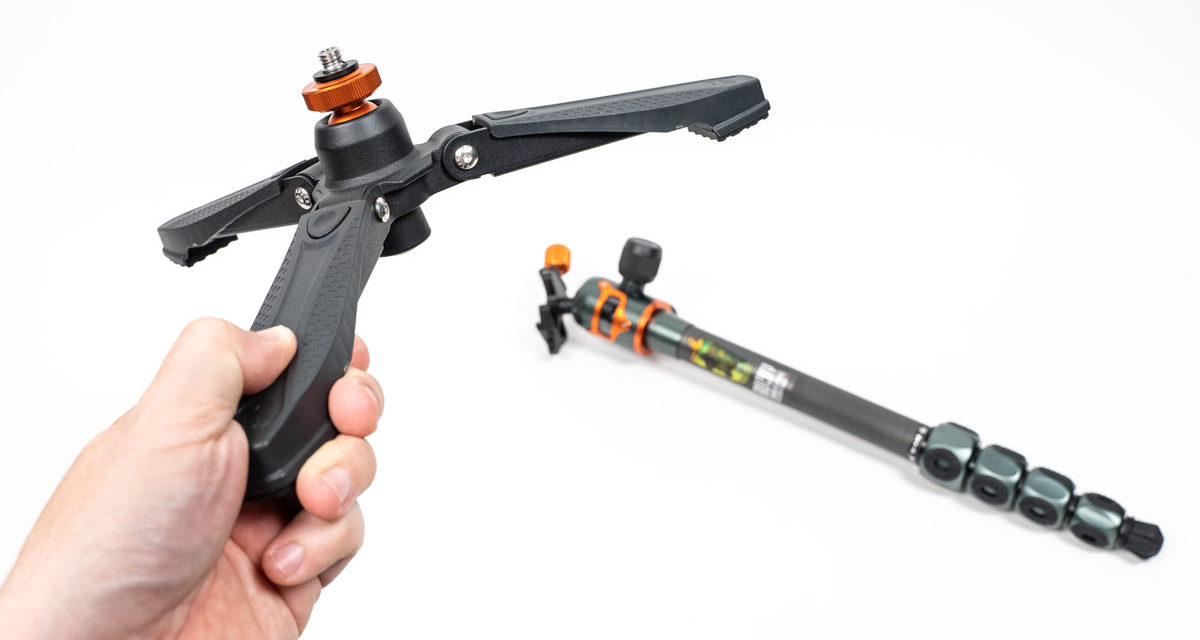 One of our readers commented on a previous 3 Legged Thing review to ask whether I had any opinions on their accessory monopod foot, the Docz2. At the time I was not familiar with the product, but a quick email was sent, and 3 Legged Thing kindly sent one over for me to review.

The Docz2 monopod foot is a ruggedly built set of collapsible feet that can be attached to almost any monopod from any brand. Out of the box, it comes with a 3/8″ 16 stud on it, but this can be quickly removed to reveal a 1/4″ 20 stud beneath it for monopods that use the smaller stud size for their feet.

When I say that this is ruggedly built, I really mean it. In the hand, this feels like a big chunk of metal, and with a weight of 1.1lbs (496g), it weighs as much as some smaller monopods do in their entirety. I wouldn’t say that this is a bad thing, but it is worth taking into account when you are considering how you might use this product.

This monopod foot is something you can screw onto the bottom of your monopod to add additional lateral stability. It is built to spend its life down in the dirt, and you can safely put your foot on any of the feet to firmly plant it further into the ground without fear of damaging it. When used in this way, it does add a lot of stability to a monopod setup. We’re obviously not talking tripod levels of stability here, but it’s certainly an obvious improvement over a monopod on its own.

Once you have your monopod attached to the feet you have the option to unlock the integrated ball head. When the orange metal collar is screwed down, the monopod is locked into the vertical position. If you rotate the collar clockwise it will lift up to reveal and unlock a small ball head. The tension of this ball head, when unlocked, is controlled by a small rubber-covered locking knob on the underside of the feet.

If you do need to unlock the ball head on uneven ground, I recommend that you really tighten the ball tension knob to make sure you are still getting enough lateral support.

Side Note: I don’t generally recommend using a ball head on top of a monopod. It’s much easier to use a dedicated monopod head. You can read my guide to the best monopod heads for more details.

Who Is This For?

Lateral stability in a monopod isn’t strictly necessary when you are shooting with a relatively fast shutter speed. For this reason, I don’t think it’s useful for sports photographers. While that is a sub-section of photographers who often use monopods during shooting, it is primarily to take the weight of big heavy telephoto lenses for long periods of time.

Lateral stability is important to wildlife and nature photographers while they are shooting in low light at the beginning and end of the day. I often recommend using a monopod in those situations, and the Docz2 foot definitely improves your keeper rate of tack sharp shots when working at the very limits of available light.

Another excellent use for the Docz2 foot is shooting video. A lot of filmmakers who shoot in a run and gun style, use a monopod to quickly add vertical stability when they stop to grab a shot. Using a monopod foot will add lateral stability to your video shots, and it does make a noticeable difference. In fact, with careful usage on hard, flat ground, you can even combine this setup with a fluid video head to get some pan and tilt motion into your shots. As I said, this isn’t going to give you tripod levels of stability, but it is a significant improvement over a regular monopod. In fact there some video-centric support brands such as iFootage that only make monopods with feet on the bottom of them.

A third potential usage for this foot is shooting in places that have specifically said “no tripods”. This might be somewhere like a tourist attraction where you want to do some travel photography, or it might be a trade show floor where you’re providing news coverage or creating a corporate video. In fact, based on a previous email correspondence I had with a filmmaker from the US, I believe that there are some entire cities, such as New York City, where tripods are technically illegal outside in public spaces. This filmmaker told me, however, that using a monopod with a set of feet on it was no problem.

Another potential use for the Docz2 is as a tabletop tripod. For me, this is definitely a secondary usage, with the primary being use a monopod foot. Clearly, this was not designed with use as a tabletop tripod in mind. There is only one position for the legs, meaning your camera can only have one height on the table. The weight and bulk of this product also stand out compared to other tabletop tripods on the market. Using the ball tension knob, positioned underneath the feet, is also very fiddly when trying to critically frame a shot because it really requires you to lift the tripod to perform the tensioning action.

So yes, you could use the Docz2 as a tabletop tripod if you suddenly found yourself needing one. And if you can line up the shot you need at that exact height, you’re certainly giving you camera a sturdy platform to shoot from. In that way, it’s a nice bonus to be able to use the Docz2 in this way. That said, I would not recommend this product if you are primarily looking to buy it as a tabletop tripod and never use it on a monopod. If you need an excellent tabletop tripod and don’t need to use it as a monopod foot, buy the Feisol TT-15 instead.

The Docz2 monopod foot is a great way to add some lateral stability to a monopod. It’s built like a tank, and gives me confidence that it will last a long time, even though its primary position would be on the ground under my foot! With all of 3 Legged Thing’s tripods having removable legs that turn into monopods, this is a product that should interest fans of the British brand, as well as users of other monopod brands.

What’s important to consider is weight. A lot of the time people are choosing to use a monopod instead of a tripod when they wan to save some weight. Adding the Docz2, or any other monopod foot for that matter will add back some of that weight you have saved. In most cases, this will create a support platform that delivers stability which falls somewhere between a monopod and a tripod. If you don’t mind that added weight, you will get noticeably increased stability that could easily make the difference between getting a sharp shot, and not.

As with all camera support decisions, you have to weigh up the pros and cons for your individual situation on the day. Without a doubt I can see myself using this on the monopod that I keep in my car, ready for any roadside wildlife that I come across on my travels through Northern Canada. There’s really no downside to using it in that situation because its weight is not a factor. I can also see myself using it for run and gun video work, and I’d definitely take it to places where I know I would not be allowed to use a tripod.