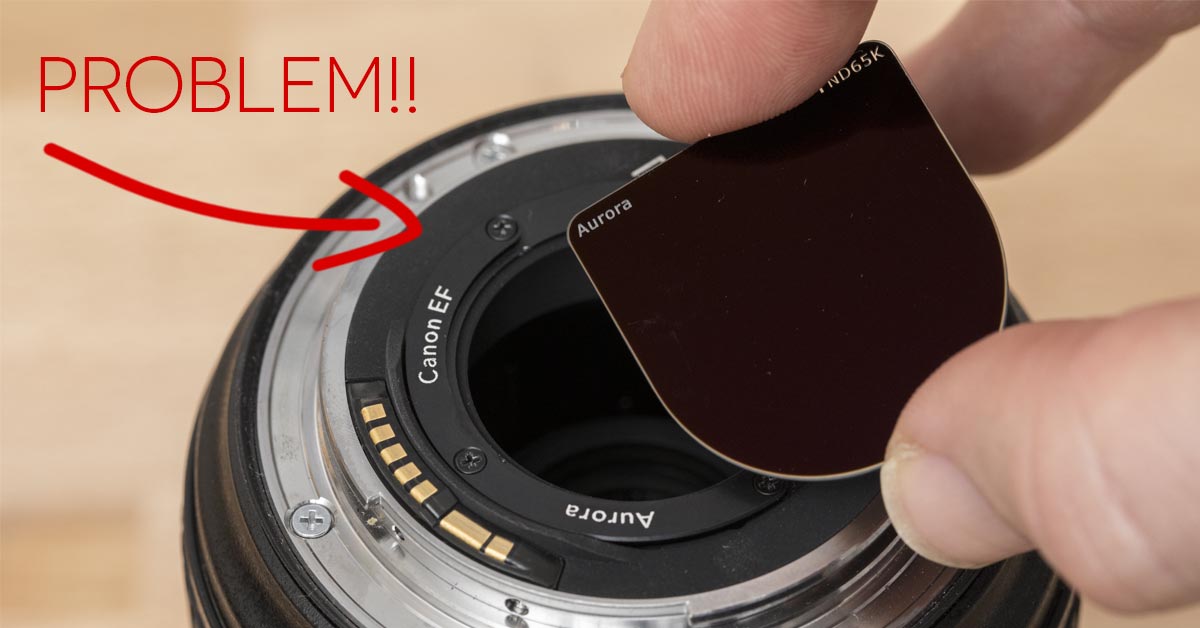 UPDATED: Jan 24th 2018 – After discussion with Aurora Aperture about the problem with this rear-mount system, I have included further information on their suggested workaround and have also slightly adjusted the conclusion and title of the post.

The Aurora CR ND filters, made by Aurora Aperture, are designed to attach to the rear of some of Canon’s ultra wide lenses – most notably the Canon 11-24mm f/4 L. I own this lens and absolutely love it for landscape photography, but the bulbous front element really limits your ND filter choices if you want to use longer exposures to blur water or clouds. Several companies make front-mount filter systems for this lens, such as Wonderpana, but the filters themselves are absolutely gigantic.

When Aurora Aperture announced a rear-mount system for the 11-24mm lens I was very excited about it. They sell the filter kit as a set of 4, and you 3-stop, 6-stop, 12-stop and 16-stop filters. The combined weight of all of these tiny filters is less than a single 77mm screw-in filter that I use on many of my other lenses. Whilst this kit can’t solve the problem of not having a polarizing filter it sounded, on paper, as if it was a perfect solution for everything else.

Upon unboxing the filter kit, I screwed the tiny holder to my lens with the included screwdriver and I headed out to do some testing. Certainly at the time of writing this I couldn’t find any hands-on reviews of this product at all, so I wasn’t really sure what to expect. With my camera on a tripod I switched on live view so that I could focus as accurately as possible. To begin with I was using the 3-stop filter and I found that it still let enough light into the camera to focus using live view, with the filter in place.

A few quick test shots revealed sharp enough looking images on the screen, and to be honest at this point I was more concerned about looking for colour cast. I moved onto the 6-stop filter next, and again I found there was enough light passing into the camera to use live view for focusing. No problems so far!

Next up was the 12-stop filter, but by now this was cutting too much light to the camera so the live view screen and the viewfinder were just black. This wasn’t an unexpected result, and anyone familiar with very high density ND filters will know that generally you have to focus the camera first and then add the filter before taking the shot. So I removed the filter, placed the lens back on the camera and used live view to focus. I then carefully removed the lens and added the filter to the rear slot, returned it to the camera and took a photo…

It was immediately noticeable that the shot was soft. So soft that I didn’t need to zoom in on the image to see it. At first I thought that maybe I had nudged the focus ring during the lens removal procedure, but after 4 or 5 more attempts at the same routine, I couldn’t get a sharp shot. For these tests I was shooting the mountains in my local valley, with the focus being set on extremely distant features, basically at infinity.

I also tested the 16-stop filter and had the same problem, so that ruled out a single faulty filter. The theory that was forming in my head by this point was that the rear-mount filter was causing a shift in the focal point of the lens. With the 3-stop and 6-stop filters I hadn’t noticed it because I was focusing with live view through the filter, so that was compensating for the change. However, with the 12-stop and 16-stop filters you simply can’t focus with the filters on.

I returned to my office and grabbed my spyderLENSCAL focus calibration device to test this theory. Firstly I used no filters, and focused in live view on the central part of the focus scale (Figure 1). Then I placed the 3-stop Aurora CR filter into the lens and took another shot, without adjusting the focus of the lens at all. As you can see from Figure 2, there was an enormous shift in focus as soon as the filter was placed in the lens. To confirm that I had not knocked the focus ring, I then removed the 3-stop filter and took another shot. The focus fell right back where it should do!

NOTE: These images are compressed for web display so you can’t use them to judge sharpness of the filter. The images are simply to show to obvious shift in focus when a rear-mount filter is applied to the Canon 11-24mm f/4 L lens.

I emailed Aurora Aperture to ask them if this is something they were aware of, and why it might be happening. The response I got was “We don’t know for sure why it happens”. I guess it’s ok not to know why it happens, but that reply also means that they know that it does happen. If that’s the case, I definitely think they need to clearly explain this on their website so that people are properly informed. (EDIT: my current understanding is that something will be added to the site to clarify things).

This suggestion came from Aurora Aperture during our email exchange – I have tested it and can confirm that it works.

So is this a plausible solution in the the field?

It’s not perfect, but it’s a heck of a lot better than not having the option to use the 12-stop and 16-stop filters at all. These filters are fiddly to use, due to their small size and the need to slide them very carefully into a thin slot. Having to first add the 3-stop filter before switching it out for your desired filter is an extra step, but it does get you the result if you have the patience and dexterity to manipulate these things carefully.

It’s one thing to do this in the comfort of your home, but be prepared for something entirely different when you’re out in the field. The lens and filter changing process leaves your camera on a tripod for a few seconds with no lens mounted to it, and that’s definitely less than ideal in some weather and environments. You can’t move the camera because you’ll have just focussed it through the 3-stop filter, and you have to remove the lens to carefully swap the filters so there’s no way around this. When you do remove the lens, you also have to make sure you don’t bump the focus ring, or move the tripod too much when you reattach the lens. Perhaps bring a cloth and some duct tape with you to fix the focus ring and cover the camera?

The 3-stop and a 6-stop filter will do an excellent job of blurring things like moving water in rivers and waterfalls. Whilst they are a fiddly to use, they are very sharp and also perform well in terms of colour neutrality.

The focus shift issues that were discovered when it came to testing the denser filters really surprised me. Initially I was hugely disappointed by this because I really wanted to love this unique filter solution. I’m pleased that Aurora Aperture were able to suggest a workaround for this issue, and although it adds even more to the complexity of the setup process, it’s a viable option for those that really want to blur clouds and open bodies of water with incredibly long exposures. In fact, despite the fiddly setup procedure, it’s probably still preferable to carrying around a 12-stop filter that’s the size and weight of a dinner plate.

I realize that this focus shift problem is probably down to some optical physics that is beyond the reasonable control of Aurora Aperture. They should still be applauded for coming up with this neat solution in the first place, however, I do wish they had been a bit more forthcoming about issue in the first place. My initial findings created a few discussions on the web…

Moving forward though, I think people will be more informed about the downsides to the rear-mount system and with that knowledge they can make their own decisions about whether they want to deal with filter swapping procedure that I’ve described. For my part, I still wish that they were selling a cheaper kit with just the 3-stop and the 6-stop filters in them. Generally speaking I don’t see a lot of people out there with the patience to do 5 to 10-minute long exposures with these darker densities anyway, and I can’t help thinking that the number will be further diminished with the fiddly nature of this setup procedure.

Focus weirdness aside though, the filters are optically excellent and if you have the patience to work with them, I think you’ll be pleased with the results.